Why Thousands of Foreign Nationals Receive Military Training on U.S. Bases Each Year 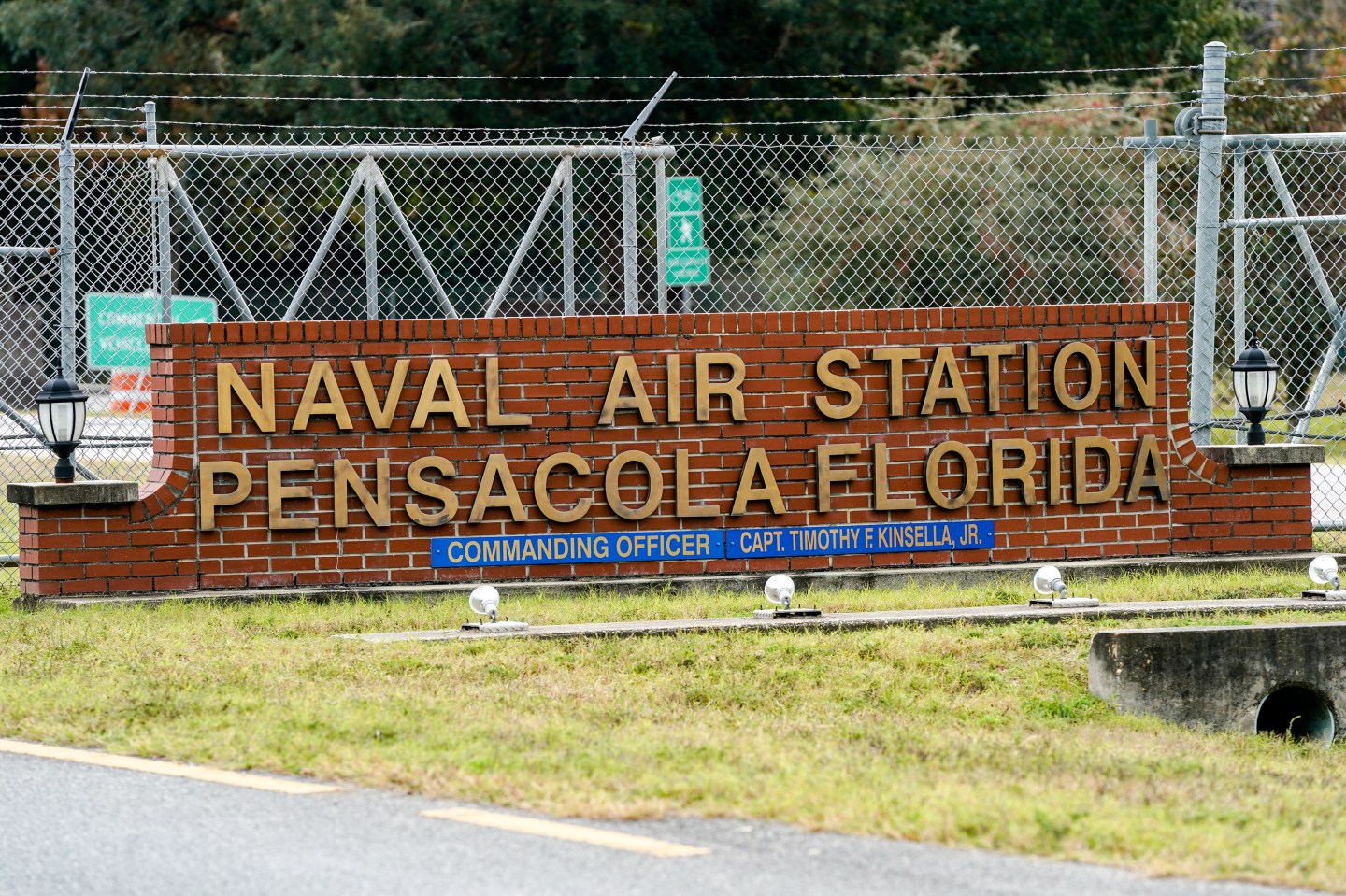 A general view of the atmosphere at the Pensacola Naval Air Station following a shooting on December 06, 2019 in Pensacola, Florida.
(Photo by Josh Brasted/Getty Images)

In early December, 21-year-old Saudi national Mohammed Alshamrani walked onto the Pensacola naval base where he was receiving a three-year training in basic aviation, initial pilot training, and English. Alshamrani entered a classroom building at dawn and opened fire with a locally-purchased Glock 45 9-millimeter handgun, shooting and killing three people and injuring several others, before police fatally shot him.

Alshamrani was one of thousands of foreign nationals who receive military training on U.S. bases each year.

The State and Defense Departments jointly lead the programs that provide for such training, primarily the International Military Education and Training (IMET) program, which has done so since 1976.

Why are foreign nationals given military training in the U.S.?

IMET seeks to both improve the recipient country’s defense capabilities, increase respect for democratic values, and ultimately bolster military cooperation and peace around the world, according to the Government Accountability Office (GAO).

In practice, IMET includes professional military education, English language training, and technical training. This can also include introducing students to components of American democracy, such as the judicial system, legislative oversight, free speech, and equality issues. But professional military education constitutes the largest use of IMET funds.

In fiscal year 2018, the U.S. provided more than $110 million in training to students from 126 nations, according to the State Department.

More than 5,000 students from 153 countries are currently enrolled in these programs.

The main reason the U.S. runs these programs? In an effort to improve security, says Jesse Dillon Savage, a professor at Trinity College Dublin who has researched military training alongside Jonathan Caverley. “However, the U.S. has such diverse interests it means that when you look at specifics the U.S. trains a lot of states for a lot of different reasons.”

“A Rand report from 2018 found that three different types of states receive assistance: countries with strong capabilities and democratic institutions, countries facing instability, and countries that are politically distant from the U.S.,” Savage explains. “The U.S. trains almost everyone, however. It also does so through a large number of different programs with diverse goals and justification.”

“The logic behind this approach is simple,” wrote Mara Karlin, director of strategic studies at the Johns Hopkins School of Advanced International Studies (SAIS). “Fragile states jeopardize U.S. interests, but large-scale interventions are costly and unpopular. By outsourcing regional security in places where U.S. interests are not immediately threatened, Washington can promote stability without shouldering most of the burden itself. And heading off threats before they metastasize means that the United States can keep its eye on more sophisticated rivals such as China and Russia.”

Yet this is not always what happens in practice.

Captain Amadou Haya Sanogo led a coup that overthrew the government in Mali in 2012. Lt. Col. Isaac Zida led a coup in Burkina Faso in 2014. Yahya Jammeh was part of a coup in Gambia in 1994. Col. Moussa Tiegboro Camara was part of a military junta that took power by coup d’etat after the death of the Guinean president in 2008. He went on to lead—and be charged for—a 2009 massacre of pro-democracy demonstrators at a soccer stadium in Guinea. All of them received military training in the U.S.

And these programs have come under renewed scrutiny following the recent Pensacola shooting.

How are foreign nationals who receive U.S. military training vetted?

Trainees are vetted before coming to the U.S., but following the Pensacola shooting, the Defense Department has ordered a full security review of all of the international military students in the country.

Existing vetting includes database searches for support for terrorism, drug trafficking, corruption, or other criminal behavior. Those who don’t pass the screening are not permitted to enter the U.S. American officials in the individual’s country of origin undertake the security screening and individuals must also undergo military screening.

“The foreign government has to certify that these are the best of their best, that these are their future generals and admirals and senior military officials for their countries,” Rep. Matt Gaetz explained to USA Today. “The U.S. State Department does a scrub on those prospective trainees, and after that they matriculate into the program.”

But it’s not just the vetting that has spurred criticism.

How effective is this training?

For years, third parties have denounced the lack of emphasis on human rights education and training. As of FY2018 the National Defense Authorization Act (NDAA) includes a provision to report on human rights training in an effort to address this, but the GAO found that monitoring and evaluation of such training remains limited.

Perhaps more troubling, however, is the government’s own admission that the military does not adequately track and monitor the effectiveness of the training.

The 2011 GAO report notes several weaknesses, including the lack of a performance plan, limited information on graduates, and lacking objective evaluation efforts as they relate to long-term desired outcomes.

According to a 2019 report from the office of the Special Inspector General for Afghanistan Reconstruction (SIGAR), for example, the Defense Department canceled a training program for Afghan pilots after approximately 40% of the students went AWOL.

A 2017 report found that close to half of the 320 foreign military trainees that have gone AWOL since 2005 were from Afghanistan.  Trainees from countries such as Saudi Arabia, Turkey, and Yemen have also gone AWOL during training. Many remain unaccounted for.

Jonathan Caverley, a professor at the U.S. Naval War College, explained that while the U.S. engages in enormous training efforts for countries we’re trying to reconstruct—such as Afghanistan—the positive outcomes may be limited due to the sheer difficulty of the problems.

“Most training efforts are concentrated in just a couple of countries, but they are also the most challenging ones to actually build a military, so it is unlikely to see much success,” Caverley told Fortune.

There are also broader military training efforts, which engage fewer soldiers per country, but these efforts are “broad but shallow.”

“Because the efforts are relatively shallow, it’s not clear you’ll see much of an effect there either,” Caverley said. “What is fairly clear about both prongs is that we spend a ton of effort, but it is unlikely to see much success in either one.”

A Congress Research Service report from 2001 and the Federation of American Scientists (FAS) have both found that the U.S. has continued to offer IMET assistance to countries with poor human rights records, and many graduates proceeded to engage in mass human rights abuses after completing their training.

“While IMET may indeed improve ties between the U.S. and foreign militaries, too often it is the foreign civilian population that pays the price of this strategic benefit,” the FAS noted in the report. “During the Cold War, for example, the people of Latin America suffered immensely under the brutal and antidemocratic rule of U.S.-supported regimes, the ranks of which were often filled by graduates of U.S. training programs. Despite their flagrant disregard for human rights and democratic values, these regimes continued to receive American aid, largely for strategic reasons (i.e. the U.S. feared Soviet encroachment into its sphere of influence). The results were disastrous.”

Among the examples the FAS provides is the Argentine military under President Perón and the Zimbabwe African National Union-Patriotic Front under Prime Minister Mugabe. Both received significant IMET assistance and were later responsible for the “disappearance” or torture or deaths of their citizens.

That’s not all. Other controversial leaders, such as Panamanian leader Manuel Noriega and Egyptian President Abdel Fattah el-Sisi, took power in their respective countries by coup. Both received training in the U.S. Noriega was also a student at the U.S. Army’s School of the Americas, which was later revealed to have taught practices such as torture, extortion, kidnapping, and execution. Many graduates went on to be accused of a range of crimes, including corruption, torture, and coup attempts.

Karlin suggests that the long-held approach may be misguided.

“History shows that building militaries in weak states is not the panacea the U.S. national security community imagines it to be. As examples that span the globe have demonstrated, in practice, American efforts to build up local security forces are an oversold halfway measure that is rarely cheap and often falls short of the desired outcome.”

It’s not all negative, however. “Programs like IMET give the U.S. military tremendous exposure to partner militaries and vice-versa,” Karlin told Fortune. “This exposure is operationally and strategically useful. Operationally, it helps strengthen the partner military’s and the U.S. military’s capabilities. Strategically, it helps both countries develop a deeper understanding of one another, particularly the potential for and limits of partnership.”

Caverley advised against weighing the military instrument too heavily, as it leads to biased outcomes: “The problem is not necessarily that the U.S. trains bad people—they just have a military mindset. What you’re doing with this training is strengthening the military in a less institutionalized society. So if you build up a military in a place like Guinea or Gambia or Mali and don’t build up civil society and civilian infrastructure that supports it, you are likely to get militarized foreign policy, likely to weaken civilian control of the military, and see coups in extreme cases.”

What really matters, Caverley said, is the shift in the balance of power that occurs.

Savage adds that the key reason it can go wrong “is that local actors don’t have the same preferences or goals as the United States, particularly in a lot of developing countries with weak institutions. In this environment, the effects of military professionalization are likely ambiguous.”

Despite these criticisms, the 2010 Quadrennial Defense Review noted that American strength and authority impacts and is impacted by the international system. As such, IMET is a crucial part of a broader American effort to build and maintain security cooperation with countries around the world. The review claims that this cooperation, in turn, can serve to promote U.S. security interests and improve intelligence sharing, among other benefits.

A RAND Corporation report concurs, noting that “training foreign militaries continues to be considered one of the most cost-effective and successful means of achieving a broad range of American political and military goals in the developing world.” Particularly in the years following the Sept. 11, 2001 terrorist attacks, such training has taken on increased importance. Between 2001 and 2017, IMET spending doubled, reaching the $110 million still allocated on average today.

And there’s at least one other reason to continue these training programs: We’re not the only country to do it. There is growing concern among some that countries such as Russia and China are starting to use military training as a source of influence.

As part of the FY2020 budget, however, the Trump administration has proposed a 23% cut to State Department funding, including slashing the IMET budget by 10%—a move criticized by many members of Congress. A decision has yet to be made.

—How the UN’s climate efforts could change the business world
—The cap and trade market is going global—if politics are put aside
—These tech companies spend the most on lobbying
—Will Trump’s impeachment trial be the end for Democratic senators in the 2020 race?
—2020 Crystal Ball: Predictions for the economy, politics, technology, and more
Get up to speed on your morning commute with Fortune’s CEO Daily newsletter.