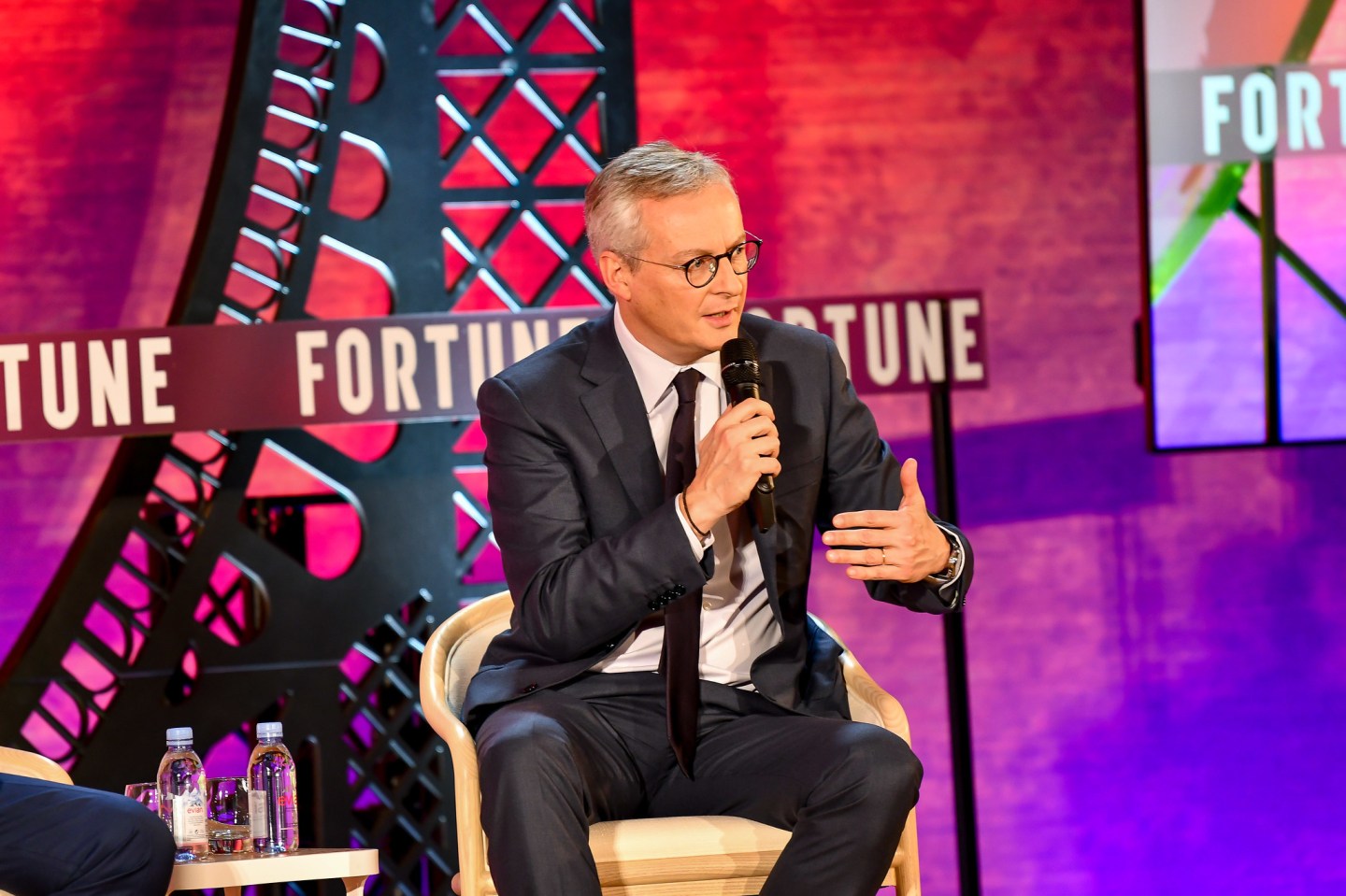 In his two-and-a-half years as France’s Minister of Economy and Finance, Bruno Le Maire has proven to be what Les Francais call “un franc-tireur,” or “straight shooter.” His speech and Q&A at the close of the first day of the Fortune Global Forum on November 18 provided an intriguing look at this maverick’s vision of socially-conscious capitalism for the 21st century.

Though a stalwart of the right-leaning Republican party of former President Nicolas Sarkozy, Le Maire agreed to serve as the nation’s economic policy chief under the nation’s leader Emmanuel Macron, founder of the more centrist La Republique en Marche (The Republic On the Move). His approach is an unusual blend: championing free-market reforms while at the same time advocating strong government backing for green energy, leadership in 21st century technologies, and European solidarity as the only bulwark against the growing hostility from the U.S. and China.

Since taking the job in mid-2017, Le Maire has made headlines for advocating the most sweeping wave of privatizations in over a decade, starting with the IPO for the government-owned lottery operation––he exults that small investors are clamoring for shares, a tribute to his vision of democratic capitalism. His view on the Facebook-backed crypto-currency initiative Libra? Absolument pas! The best course, he maintains, is for national central banks to launch their own exclusive digital currencies. Le Maire wants to set France en route to zero fossil fuels emissions by 2050. And Brexit, he says, provides a powerful warning to other nations considering an exit from the EU. “What does Brexit demonstrate?” he cautions. “It shows that leaving the common European market has an exorbitant economic cost.”

The French economy is on the march

Le Maire asserted that France has long boasted first-class infrastructure, top universities, and world leading companies, but lagged in implementing sorely-needed structural reforms. “We were not making the most of our potential, and the French people agreed,” he said. The voters’ desire to make France a “modern country in the 21st century,” he says, created the groundswell that elected Macron in 2017. The new government reformed labor laws to make it less costly and complex for companies to lay off workers in tough times––a big reason they were so reluctant to hire in a strong economy. A 30% flat tax on capital gains replaced a previously complex regime that encouraged tax shelters, and a new corporate tax law will gradually reduce the levy from the old 35% to 25% by the end of Macron’s term in 2022.

Those reforms are already paying off. France has created 500,000 jobs in the past two-and-a-half years, driving the unemployment rate to 8.5% from over 10%. France, says Le Maire, is now the top destination in Europe for foreign investment––thanks in part from a dividend from Brexit. “2018 was our best year ever for overseas investment,” citing that Google and Facebook recently chose France for new research hubs. He predicts that Paris will become the top financial center in Europe following Brexit, noting that Bank of America officially moved its European headquarters from London to Paris last week, relocating 450 employees. The total count of bankers and office staff making the switch will eventually be ten times that number, he forecasts.

At the same time, Le Maire comes off as anything but an champion of pure free markets. He extols the importance of the state’s role in promoting advanced technologies and green energy. France reached what he calls “the milestone” of Macron’s economic vision by establishing a $10 billion euro fund to support research in artificial intelligence, quantum computing, and renewable energy. “Every public policy must be green right now,” he asserts. Under Macron, France has halted all government investment in coal-fired plants, and his administration strongly backed the new EU policies halting subsidies for fossil fuel industries.

What the Yellow Jackets are telling the world about capitalism

During the Q&A, Fortune Media’s CEO Alan Murray pointed out that this week marks the first anniversary of the “yellow jacket” demonstrations that persist each weekend in Paris, and asked if the protests had slowed Macron’s drive for reform. “The message of the yellow jackets is not only a message for France but for all developed countries,” said minister. He added that the key problem is the way people live when they have jobs. The great hurdle for capitalism is to furnish the working poor with sufficient incomes, a test the richest nations risk failing. “It’s up to governments to ensure people with the lowest wages have the possibility to live a decent life,” he says. “They need a good life, the incomes to go to restaurants and have family vacations. If capitalism doesn’t provide those guarantees, we run the risk of great difficulties.”

Le Maire surprised the audience by invoking the U.S. president’s favorite line in promising to “make France great again.” But he also made it clear that under Trump, America’s goals have veered sharply from France’s objectives. “Even if the U.S. remains a close ally, we’re aware that the American administration has its own policy not taking into account European or French interests. We need to take decisions to face the challenges of the 21st century alone. We can no longer depend on the support of the U.S.” A prime example of America’s shift away from Europe is Trump’s exit from the Paris climate accords.

Le Maire concluded by voicing his fears that Europe may fragment rather than unite, the course his characterizes as essential for countering the U.S. and China. “I’m worried about the weakening of European governments,” he says. “It’s hard for a party to win a majority, and take decisions. It’s the lack of decisions that feeds populism everywhere in Europe.” For Le Maire, capturing the prize means gathering all of the individual strengths of the EU nations to win in the technologies of the future. “We must put our resources together,” says Le Maire. “No country can face that challenge alone.”

—The S&P 500 may be due for a 25% correction, according to historical data
—The 2020 tax brackets are out. What is your rate?
—How “VSCO Girls” are killing makeup sales
—What is “quantitative easing”—and why is everybody so worked up about it?
—A.I. vs. the wolves of Wall Street
Don’t miss the daily Term Sheet, Fortune’s newsletter on deals and dealmakers.