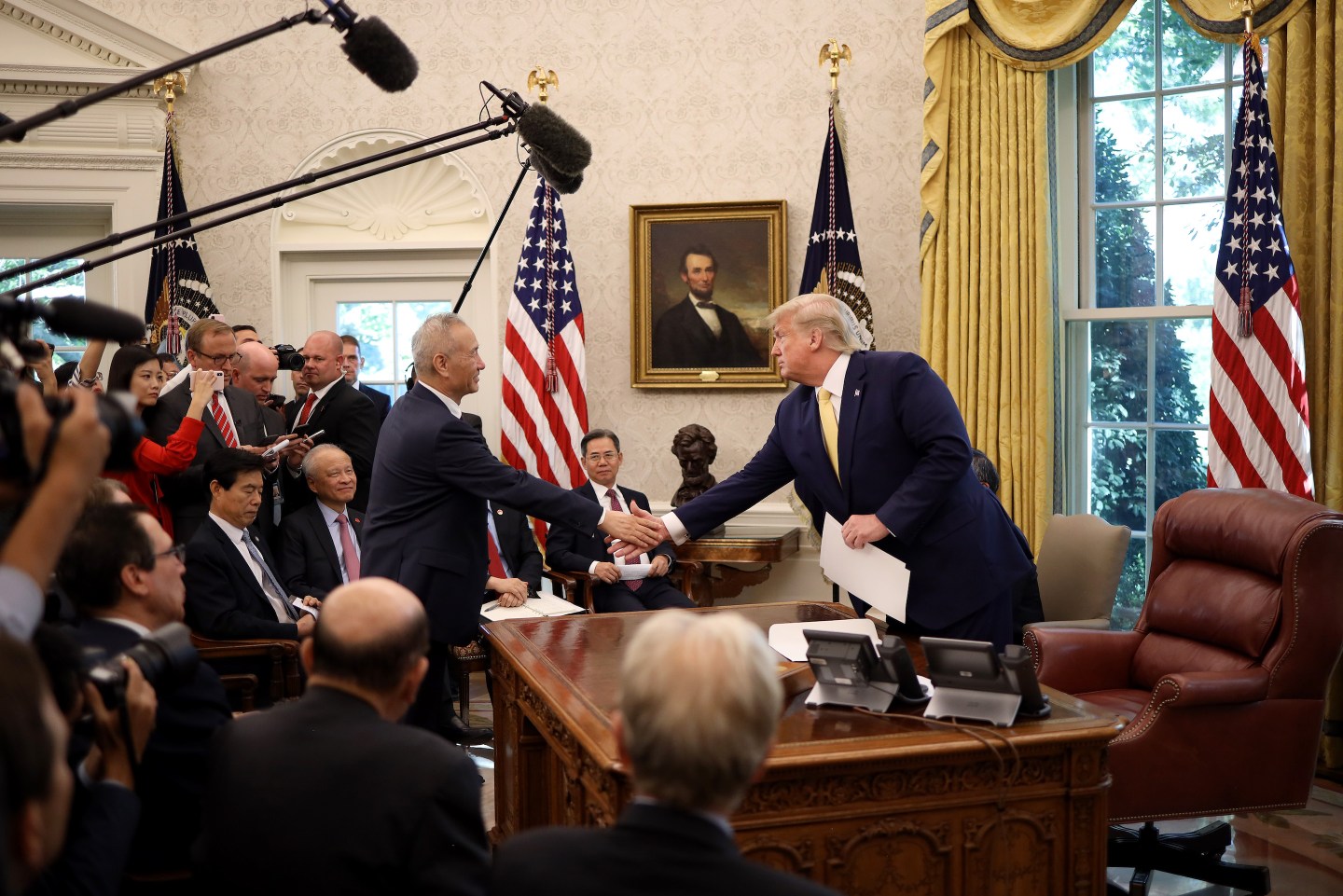 This is the web version of CEO Daily. To get it delivered weekly to your inbox, sign up here.

It has been a month since President Trump shook hands with Chinese vice premier Liu He in the Oval Office to signify that the United States and China had reached preliminary agreement on a “substantial phase one” trade deal. But negotiators from the two countries can’t seem to translate that handshake into a written document—at least not one that Trump and Chinese leader Xi Jinping are willing to sign.

Odds of a formal “phase one” accord seem to be shrinking by the day. On Friday Trump scuttled market hopes for a U.S.-China detente by declaring that he’s not willing to lift tariffs on China in order to get a deal. “They’d like to have a rollback, I haven’t agreed to anything,” Trump said.

Those comments came a day after a Chinese commerce ministry spokesman said negotiators from the two nations had “agreed to remove the additional tariffs in phases as progress is made on the agreement.” They also seemed to reproach Trump’s own economic adviser, Larry Kudlow, who said Thursday that “if there’s a phase one trade deal, there are going to be tariff agreements and concessions.”

The two sides remain deadlocked even on symbolic issues, including where to hold the signing ceremony. Trump is pushing for Xi to travel to Iowa, a crucial political swing state, which the Chinese leader first visited in 1985 as head of a five-man agricultural delegation. The more Trump telegraphs his desire for Xi to come to Iowa, the more Chinese negotiators push for added concessions.

The U.S.-China economic relationship was the focus of an insightful panel led by Alan at this week’s Fortune Global Tech Forum in Guangzhou, China. It’s well worth watching. Candid, nuanced exchanges like this are increasingly rare at business conferences these days, especially those held in China. And yet, the more their governments twist and shout, the greater the need for leaders from the two nations’ private sectors—executives, investors, entrepreneurs and technical experts—to talk and (above all) listen.

Chip in a little. Tsinghua Unigroup, China’s top semiconductor maker, criticized U.S. companies for not doing more to resolve the U.S.-China trade war. “On the one hand, they’re earning lots of money here in China, and on the other hand, they’re making malicious remarks about China to the U.S. government behind the scenes,” Chairman Zhao Weigui said, adding that U.S. tech leaders need to “do better.” Reuters

The countdown begins. CFIUS has reportedly begun its investigation into Beijing Bytedance’s 2017 acquisition of Musical.ly—the short-video sharing app that is now known as TikTok. It’s worth remembering that, despite the app’s popularity in the U.S., both Beijing Bytedance and Musical.ly are Chinese companies, however that might not prevent CFIUS from extending its jurisdiction to cover the merger. The Verge

Travelers: check. China’s financial sector is opening up to foreigners—more specifically, tourists. China’s leading mobile payments players, AliPay and WeChat Pay, have launched services that allow tourists to connect foreign credit cards to the Chinese payment apps. That’s a big deal, not only for the apparent regulatory change that permits it, but also because many service sectors only accept cash begrudgingly today. South China Morning Post

Gaining weight. The MSCI confirmed Thursday that it will increase the weighting of Chinese A shares in some of its indices after markets close on November 26. MSCI incorporated Chinese shares into its Emerging Market Index only last year in what was seen as a breakthrough for the Chinese markets. The Chinese stocks will gain a 5-point increase in the MSCI benchmarks, raising to 20% from 15%, but the added weight comes as the U.S. increases scrutiny of retirement funds investing in Chinese stocks. Caixin

Cutting down. China is stubbing out e-cigarettes, effectively banning their online sale last week. The edict came from the market regulator as well as from state-owned China National Tobacco, which operates a monopoly on cigarette sales. The ban is supposedly being implemented to protect the health of minors. However, tobacco taxes, and sales, are a good earner for the government so Beijing has a keen interest in preventing competition. New York Times

On the hunt. China is scouring the globe for new sources of meat as the trade war with the U.S. continues and African Swine Fever decimates pork stocks at home. The hungry nation is upping pork imports from Canada, despite relations remaining frosty over the detention of Huawei CFO Meng Wanzhou; Beijing doubled the number of Brazilian beef plants permitted to export to China and has opened up to Argentinian cattle too. Reuters

‘Nothing to Lose’: The Drone Farming Revolution Is Coming to China Fortune

For Chinese Retailers, Influence Is a Luxury That Can’t Be Easily Bought Fortune

Inside the Trade War’s Tech Battle That Neither China Nor the U.S. Can Afford to Lose Fortune

Screen time. China has new regulations for games. Players under 18 are now prohibited from gaming between 10 p.m. and 8 a.m. and are not allowed to play for more than 90 minutes on weekdays or three hours on weekends. This is just the latest in a string of crackdowns against the booming gaming industry. Officials blame video games for a supposed increase in myopia and a decrease in academic performance among the nation’s game-crazy youth. New York Times

This edition of CEO Daily was edited by Eamon Barrett. Find previous editions here, and sign up for other Fortune newsletters here.

For even more, check out Business By Design, Fortune's new newsletter on the transformative power of design in business. Sign up here.