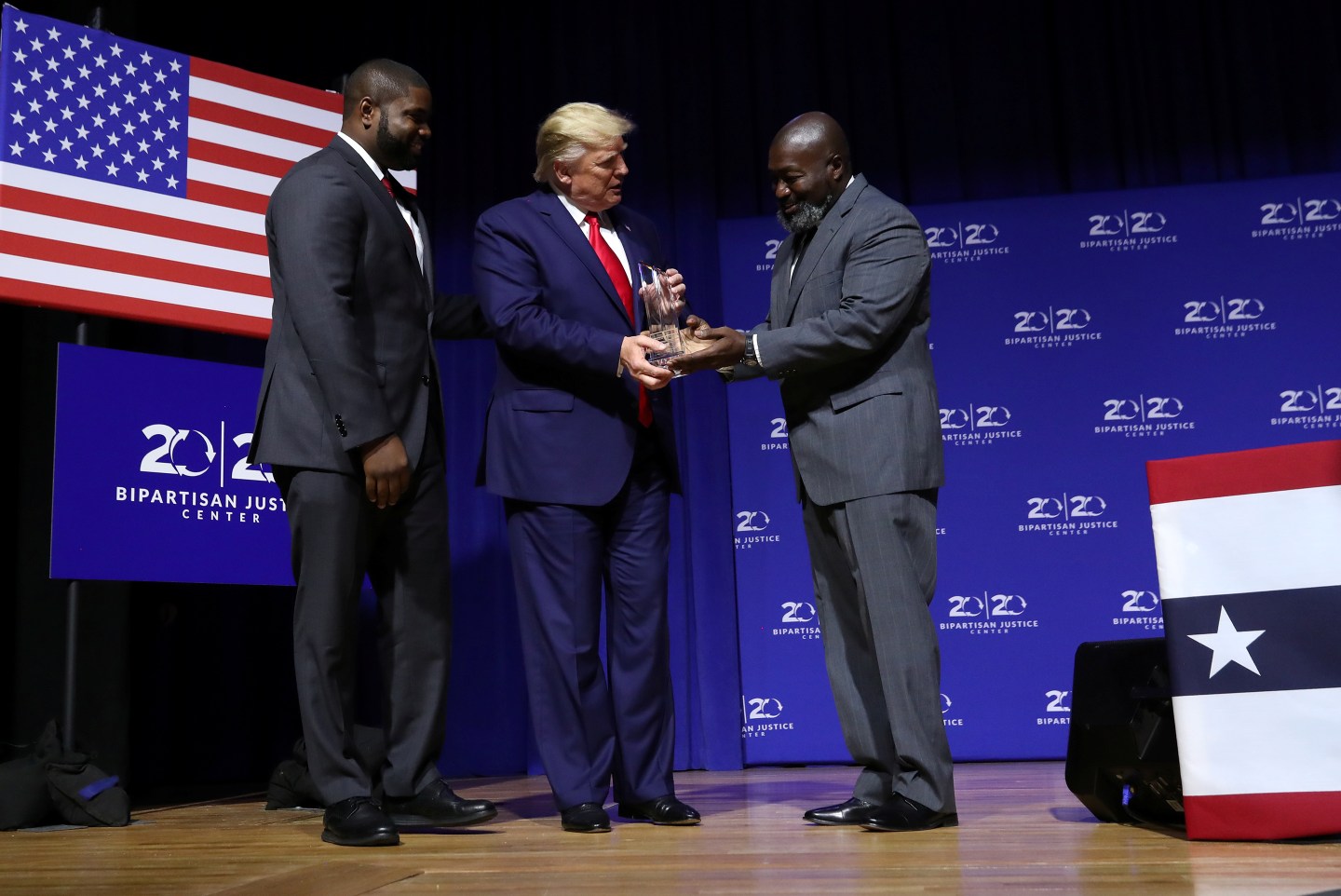 U.S. President Donald Trump receives an award from Matthew Charles, who was released from federal prison through the First Step Act, as he arrives on stage to deliver remarks at the "2019 Second Step Presidential Justice Forum" at Benedict College in Columbia, South Carolina, U.S., October 25, 2019. REUTERS/Leah Millis
Leah Millis—Reuters

A last-minute visit by President Donald Trump to a candidates’ summit on criminal justice stirred up some weekend drama, but also gave 10 Democrats seeking to unseat Trump a chance to air their ideas.

The president spoke Friday before the Second Step Presidential Justice Forum in Columbia, S.C., hailing this year’s passage of the First Step Act, legislation that provides for programs to support federal prisoners reentering society, and introduced three people whose sentences he had commuted. Among the nonviolent drug offenders was Alice Johnson, who was able to leave prison in Alabama last year after reality star Kim Kardashian urged Trump to grant clemency.

“Her (life) sentence was simply not proportionate to her crime and that’s why I commuted Alice’s sentence,” Trump told the audience at Benedict College, an historically black institution.

Trump, who once famously took out a full-page newspaper ad excoriating five teens ultimately exonerated from a rape in New York’s Central Park, referred to the incarcerated as “the forgotten community” during his speech. He hailed his own administration’s work and received an award from the 20/20 Bipartisan Justice Center, which was co-hosting the event.

The award and also the fact that students were granted only a limited number of seats at the event set off waves of criticism and prompted Sen. Kamala Harris (D-Calif.) to cancel her planned appearance. Harris later reversed her position when Benedict College took over as sole host of the event and Columbia Mayor Stephen Benjamin said he and college President Roslyn Artis were making sure the rest of the summit would be open to students.

“I just couldn’t believe that Donald Trump would be given an award as it relates to criminal justice reform,” Harris said. “Let’s be clear—this is somebody who has disrespected the voices that have been present for decades about the need for reform of this system, the people who have marched for justice in this system, the people who have sacrificed to create leadership around justice in this system.”

As for her plans for criminal justice if elected president, Harris said she would put an end to for-profit private prisons, release inmates imprisoned for marijuana-related offenses, bring them into the lucrative marijuana industry, and reform the bail system that critics say disproportionately affects the poor.

“There are people waiting days, weeks, months, years in prisons because they don’t have the money for bail,” she said. “All kinds of consequences come up just because someone does not have the money.”

“We know that children who are suspended from school have much higher rates of involvement with the police,” he said.

Booker also vowed to work toward ending inhumane conditions in the nation’s prisons. He told of women having to give birth while shackled and go without sanitary products, and decried solitary confinement.

“There are so many things going on that would shock the consciousness of this country,” Booker said, adding that he would propose awarding grants to states that change their laws toward ending mass incarceration.

The summit may have been intended as a jumping board toward further reform of the country’s troubled criminal justice system, but political observers were divided as to whether the weekend event would help push that agenda.

Louis Reed, national organizer for the group that was instrumental in pushing the First Step Act, told Fortune that he is optimistic. Reed, of #cut50, spent 14 years in federal prison for bank fraud. Reforms are necessary, he said, because our current society guides former inmates’ lives in ways that the general public could not imagine.

Michael Mendoza, national director of #cut50, is also optimistic. Mendoza spent 22 years in prison after being incarcerated at 15 for his role in a gang-related murder. He remembers feeling confused and overwhelmed when he was released to northern California, far from where his family lived at the other end of the state. Parole limited him to a 50-mile radius and, because of that, limited his job opportunities, he said. The current climate is breaking down systems thata have allowed the lack of support for people reentering society, he said.

“Our message is the First Step Act was a major, major win with major impact and we want to continue to see that grow,” he said. We’ve come a long way … we have to continue to come together on all sides.”

But political observers were not as hopeful about the impact of the weekend’s event.

“This forum gave Trump a chance to insert himself into the conversation on an issue that he thinks he can speak to and about with the community and, somehow, he thinks he can convince himself that he’s more popular,” Antjuan Seawright, a Democratic strategist based in South Carolina, told Fortune.

Seawright added that he felt that Trump’s appearance was an attempt to steer the public’s attention away from his possible impeachment. “It was a chance for Trump to do what he always does—to take the attention away and use that as a nugget of distraction to change the conversation, to make it about something else,” Seawright said.

Andrew Sidman, chair of the political science department at John Jay College of Criminal Justice, said the event likely would not make a major dent in the consciousness of the public.

“I don’t put a whole lot of stock in things that happen this early on,” Sidman told Fortune. “Everything that happens is really geared toward what these candidates to do raise their appeal to donors.”

He added that Harris “probably came out a winner on the Democratic side,” but the event was a bonus for Trump, too. “The president gets to step away from this weekend with an award … and it’s something his campaign gets to advertise to donors at this stage.”

As for the 10 Democrats who took turns explaining their proposals, most spoke in favor measures focused around the same themes: releasing inmates imprisoned on marijuana charges and bringing them into the marijuana industry, legalizing marijuana nationally, banning employers and housing administrators from asking whether someone has been incarcerated, reforming the bail system, ending for-profit prisons, barring companies from charging exorbitant phone fees to inmates and giving female inmates access to hygiene products.

In Massachusetts, marijuana is legal for medical and recreational use and Sen. Elizabeth Warren (D-Mass.) wants this passed nationally, she said. She said she also wants to expunge the records of people incarcerated on marijuana offenses and free them.

“This is about righting wrong,” she said.

Julian Castro, housing secretary under President Obama and a Democrat from Texas, said he’d like to launch a nationwide network of “Second Chance Centers” that would help former inmates with every aspect of acclimation as they reenter their communities.

“Oftentimes, when folks are coming out of incarceration, they don’t know where to begin,” Castro said.

The centers would work with nonprofits and private companies to help inmates with job training, job opportunities, and access to education and health care, Castro said.

Former Vice President Joe Biden, frontrunner in the Democratic race for the White House, vowed that he would end incarceration for drug use alone and divert people toward treatment. Biden also said he would widen the scope of the Department of Justice to address systemic misconduct in prosecutors’ offices.

“The fact of the matter is that’s a lot of the problem to begin with,” Biden said.

Pete Buttigieg, mayor of South Bend, Indiana, said he would steer $100 million in state grants toward closing youth prisons and repurposing the facilities to serve the needs of young people. He also proposed a national, four-year police academy that would include a focus on deescalation of incidents and civil rights.

“We are the most locked up country in the world and we are certainly not the safest,” Buttigieg told the audience. “The goal is to cut incarceration by half.”

—This often-accurate election model predicts Trump will win re-election in a landslide
—Voters over 65 remember Nixon—and want to impeach Trump
—How Mitch McConnell could use impeachment to scramble the Democratic primary
—A Trump win on DACA could still be a loss for his administration
—Kids brought guns to school at least 392 times last year. What experts say we should do
Get up to speed on your morning commute with Fortune’s CEO Daily newsletter.