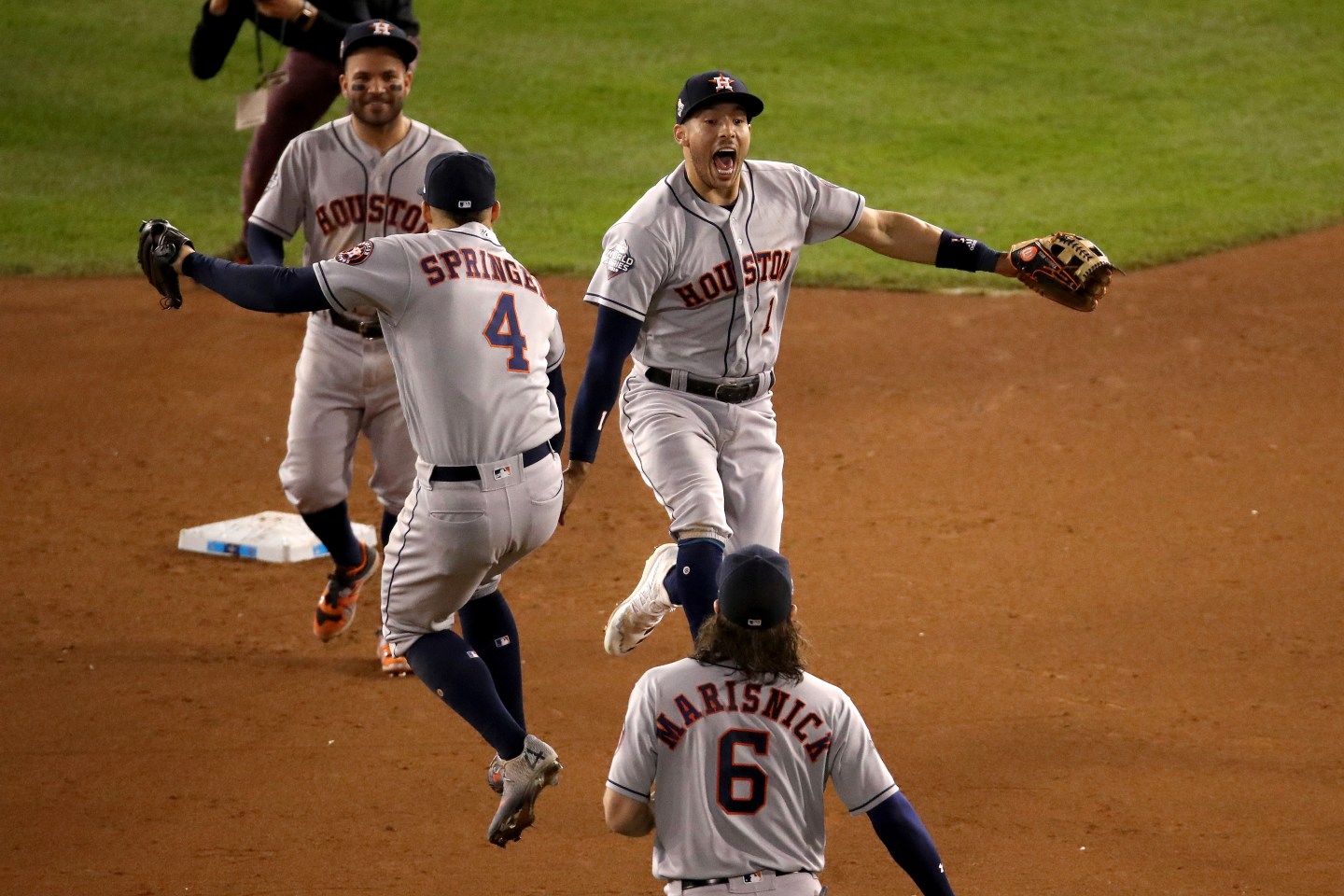 WASHINGTON, DC - OCTOBER 27: Carlos Correa #1 of the Houston Astros celebrates with his teammates after their 7-1 win against the Washington Nationals in Game Five of the 2019 World Series at Nationals Park on October 27, 2019 in Washington, DC. (Photo by Win McNamee/Getty Images)
Win McNamee—Getty Images

The Washington Nationals shocked many people by winning the first two games of the World Series in Houston. Now they’re hoping to do it again.

The situation is a bit different than it was a week ago, though. The Astros are coming into Game Six with a 3-2 lead, and the 2017 World Series champions have momentum on their side.

It may all come down to pitching in what could be a match for the ages. In a rematch of Game 2, the Nationals’ Stephen Strasburg is up against Houston’s Justin Verlander. And while Verlander is a contender for this year’s American League Cy Young Award, he has the fourth-highest ERA in World Series history.

But the Astros are still heavily favored to take the series by several oddsmakers. Will they clinch it tonight? Or will the Nats force a Game Seven?

If you’re hoping to catch the game, but won’t be near at TV or don’t have a cable subscription, Fortune has you covered. Here’s how to watch.

What time does Game 6 between the Nationals and Astros start?

How can I watch the 2019 World Series for free—even if I don’t have cable?

The best way to watch any sort of network programming for free on a big screen is with a good HD antenna. This year, the World Series is being broadcast on Fox, meaning you’ve got a good chance of capturing the game over the air, which costs nothing beyond the equipment prices. To ensure you’re getting the most reliable signal, you’ll want to test the antenna in multiple locations in your home.

Can I stream the World Series live online if I don’t have a cable subscription?

You’ve got lots of online choices if you won’t be near a TV set before the first pitch. First, if you do have a cable subscription, the game is being streamed live on the Fox Sports Go app. (You can also try logging into Fox.com or use the Fox Now app.)

If you’re a cord cutter and don’t have a cable or satellite subscription, there are several another methods that will let you watch the game. Here are a few suggestions.

This free service lets you watch local broadcast channels with no monthly fees or contracts. The hiccup is: It’s only available in certain parts of the country.

The free trial is 5 days. Subscription packages start at $50 per month.

You can try the service free for a week. Once that’s up, you’ll pay $45 per month.

After a seven day trial, you can expect monthly charges of $50.

This sports-focused cord cutting service carries Fox in most markets. There’s a seven-day free trial, followed by monthly charges of $55.

Does Major League Baseball offer any viewing options to watch the World Series?

In a sense. MLB.TV offers every post season game, including archived broadcasts of the playoffs, so you can relive the Astros’ dramatic clenching of the pennant as often as you’d like.