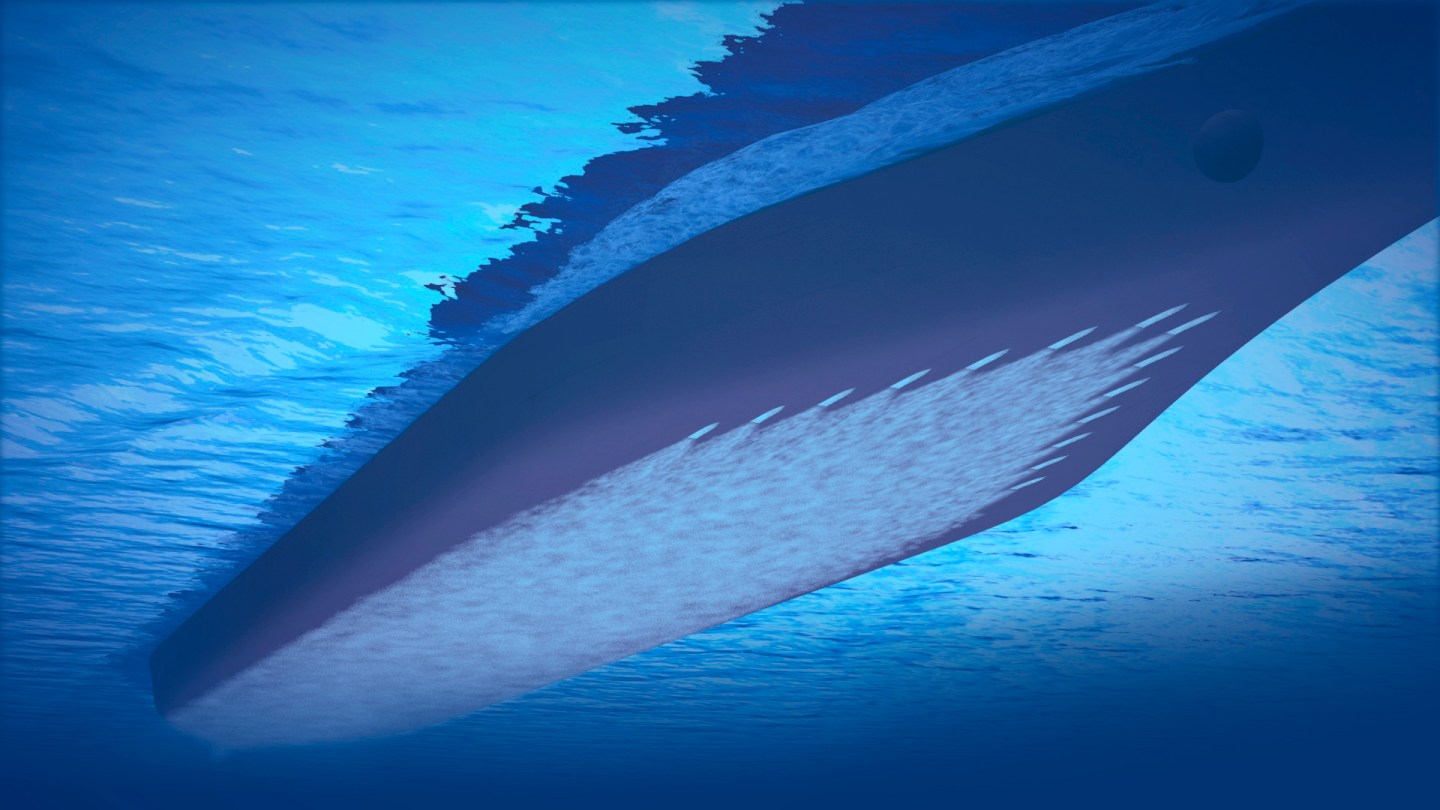 Next year, millions of vacationers will sip Champagne as they watch the sun set over the ocean on Carnival cruise ships. All the while, company engineers will be engrossed by a different set of bubbles—under their vessels.

In the coming months, Carnival’s engineers will begin pulling 115,000-ton ships into dry dock and crawling beneath the hulls. There, they’ll weld nine mattress-size metal boxes to the outside of each hull in the shape of a “V” and install air compressors inside the vessels. The system, from Silverstream Technologies, will ­create a carpet of tiny air bubbles between the ships and the water. The expected benefit: less drag and 5% to 10% better fuel efficiency, achieving up to $1 million in annual savings per ship.

“Just one ship is like a floating city consuming energy,” says Mike Kaczmarek, Carnival’s vice president of marine technology. “We’re always looking out for new, cutting-edge advances, and this concept is simple, clever, and it works.”

The world’s largest cruise ship company’s quest for energy efficiency comes as the maritime industry, among the world’s biggest polluters, faces sweeping new environmental regulations in January. The new rules are forcing shipping companies to clean up their act, and they’re responding by deploying everything from futuristic sails to supersize batteries.

That said, reducing the environmental impact of shipping is a profound challenge. New technologies, by themselves, can do only so much for an industry that transports a huge chunk of world trade and ferries millions of tourists.

Oil tankers, container ships, and cruise liners guzzle massive amounts of fuel. This “bunker” fuel is chock-full of sulfur, which means it emits more poisonous gases and harmful particles when burned than does motor-vehicle fuel. All told, the maritime industry is responsible for 2.5% of all greenhouse gases along with millions of childhood asthma cases and thousands of premature deaths.

In 2020, the United Nations’ International Maritime Organization will try to reduce that environmental impact by requiring all international vessels except yachts to use fuels that contain no more than 0.5% sulfur, down from today’s limit of 3.5%. The cleaner fuel will drive fuel costs up 30% to 60%, or an estimated $30 billion annually.

“This is the most dramatic improvement in global marine fuels in a century,” says James Corbett, a marine science and policy professor at the University of Delaware who co-led the research that prompted the new rules.

For nine years, Silverstream founder Noah Silberschmidt struggled to get attention with his London-based company’s air lubrication technology. The physics behind the bubble tech was first mentioned in maritime literature in 1865, but big shipping companies only recently started embracing it. In addition to Carnival’s leap into bubbles, Silverstream’s technology is being used by Norwegian Cruise Line, a Royal Dutch Shell oil tanker, and soon, a dozen Grimaldi Group cargo ships. “People weren’t interested in radical thinking,” Silberschmidt says. “Now the industry is waking up.”

Besides bubbles, Carnival is investigating additional techniques to reduce fuel costs and emissions. Scrubbers that cut pollution, sleeker ship designs that reduce drag, and cleaner fuels like liquid natural gas are just some of the possibilities.

Maersk, the Danish shipping giant, has put $1 billion behind a similar effort over the past four years. The company, which operates 700 container ships, intends to be carbon neutral by 2050. “In the next 10 years,” says Ole Graa Jakobsen, Maersk’s head of fleet technology, “we need some big breakthroughs.”

One such innovation may be rotor sails: tall, spinning columns manufactured by Finnish startup Norsepower that work like wind sails but are automated and more powerful. They reduce fuel consumption by 5% to 20%. Maersk and Viking Line have already installed them on some ships.

The rotor sail, see above, is one of many new fuel-saving technologies gaining traction in the maritime industry as it tries to reduce emissions.
COURTESY OF NORSEPOWER

Environmentalists say, however, that new technology will have only a limited impact on pollution. Transport & Environment, an organization pushing for cleaner transportation, argues that even with the new rules in 2020, ships will still belch 100 times as much sulfur as Europe’s 260 million passenger vehicles.

Emissions are not the industry’s only pollution problem. In 2016, Carnival was hit with a $40 million fine and five years of probation for discharging plastic and food into the ocean, while also illegally dumping “gray water” from showers and kitchen sinks. This summer it received another $20 million fine for violating that probation.

Given the industry’s spotty track record, environmentalists are concerned that some companies will flout the new rules. In many cases, enforcement will fall on countries with lax oversight, like Liberia and Panama, where an increasing number of vessels are registered.

Whatever the case, Carnival’s Kaczmarek says his company is committed to reducing its environmental impact, and bubbles may play an important role. “Our ships have to be in compliance. There’s not a ton of R&D in cruising, so we have to figure it out.”

A version of this article appears in the November 2019 issue of Fortune with the headline “Big Ships Tack to a Greener Future.”

—Plunging costs make solar the renewables leader as world struggles to meet Paris Accord
—Norway is a green leader. It’s also drilling more oil wells than ever
—The World Bank and its peers get poor marks for funding renewable energy projects
—The Future 50 sustainability all stars
—How 3 PG&E execs decide when California businesses go dark to stop wildfires
Subscribe to The Loop, a weekly look at the revolutions in energy, tech, and sustainability.