Louis Vuitton and Tiffany Are Talking About Tying the Knot 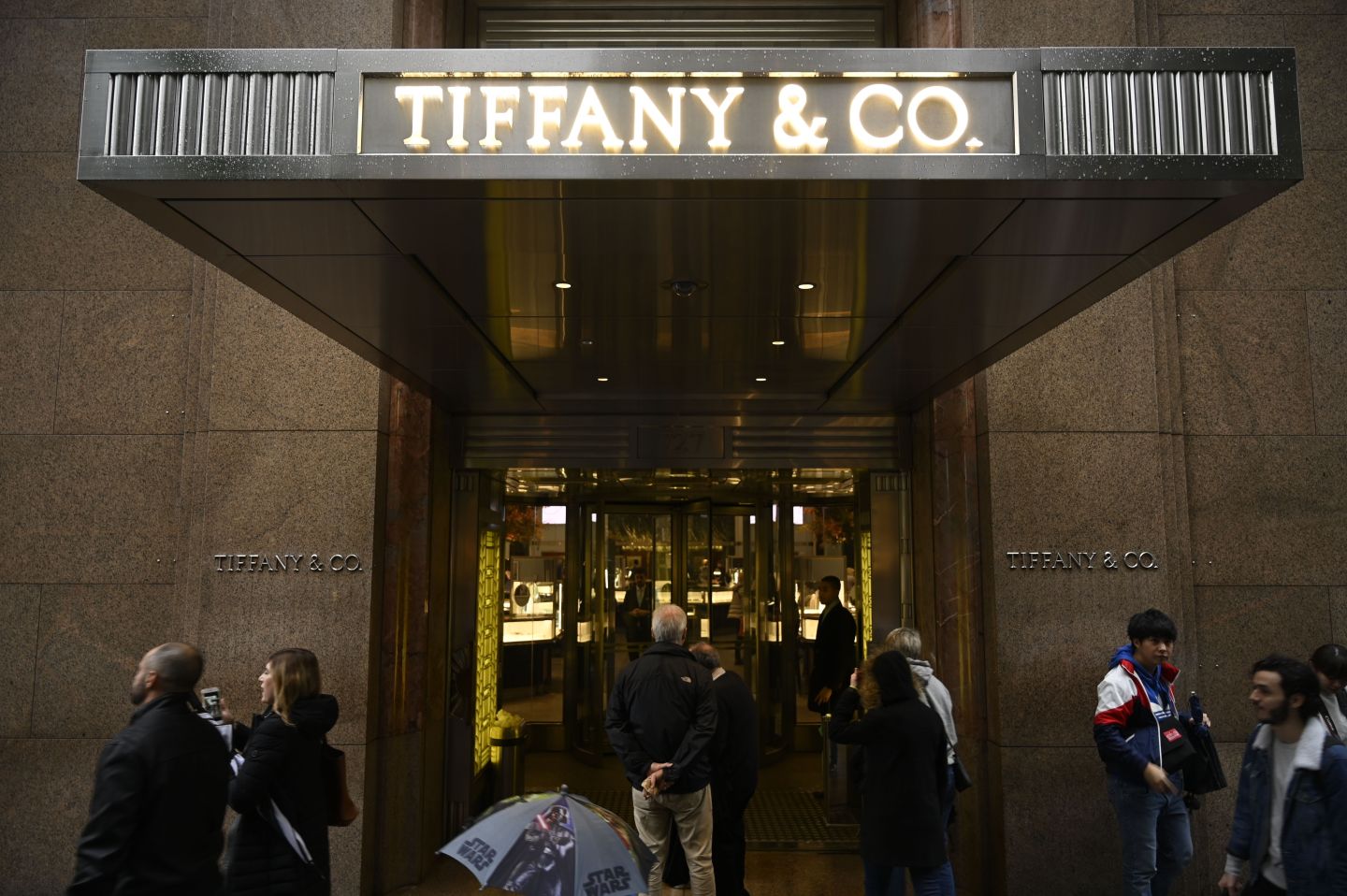 People walk past the headquarters of luxury jewelry and specialty retailer Tiffany & Co on 5th Avenue in Manhattan on October 27, 2019 in New York City. - LVMH, the French owner of Louis Vuitton, is exploring a takeover of Tiffany & Co to expand in the US jewelry market, according to reports. (Photo by Johannes EISELE / AFP) (Photo by JOHANNES EISELE/AFP via Getty Images)
JOHANNES EISELE—AFP via Getty Images

LVMH, the French owner of Louis Vuitton and Givenchy, said it has held preliminary discussions with jeweler Tiffany & Co. on a possible takeover.

There’s no assurance that the discussions will result in any agreement, the French luxury giant said.

Bloomberg reported earlier that LVMH has offered about $14.5 billion, or $120 a share, for the jeweler in a deal that would expand its access to U.S. luxury shoppers. That would be about 22% more than the Oct. 25 closing price.

“Tiffany could prove an interesting fit to LVMH, which is still underpenetrated in jewelry,” said Deborah Aitken, senior luxury-goods analyst at Bloomberg Intelligence. With branded jewelry growing at about 6% a year — about 200 basis points faster than high-end watches — she said buying Tiffany could help LVMH compete against companies such as Swiss rival Richemont SA, the owner of Cartier and Van Cleef & Arpels.

Tiffany is expected to reject the offer as undervalued, the Financial Times reported Sunday, citing people familiar with the matter.

If successful, though, the purchase would be the biggest deal yet for LVMH founder and Chairman Bernard Arnault, Europe’s richest man. An acquisition would give LVMH an iconic 182-year-old U.S. brand known for its robin’s egg blue boxes and its role as a favorite haunt of Holly Golightly in Truman Capote’s “Breakfast at Tiffany’s.” The French company also owns the Bulgari jewel and watch brand, Sephora cosmetics stores, Hublot watches and Dom Perignon Champagne.

Paris-based LVMH rose about 1%. It has jumped about 50% this year, giving it a market capitalization of about $215 billion.

A fair valuation of Tiffany would be about $160 a share or higher, according Cowen & Co. analyst Oliver Chen. He wrote in a note Sunday that Tiffany’s “strategic positioning as a gifting authority, brand DNA as a diamond and bridal authority, are leading qualities and deserve an exceptional premium.”

A takeover of Tiffany would be bigger than the $7 billion LVMH paid for the rest of Christian Dior in 2017. For 70-year-old Arnault, it would be his first major transaction since the purchase of luxury hotel chain Belmond last year, and potentially among the largest deals by a European company in 2019.

An acquisition would further diversify the conglomerate, which has been riding a wave of luxury demand in China but faces risks including that country’s trade war with the U.S. and the months-long anti-Beijing protests in Hong Kong. The company nonetheless beat analysts’ estimates with a 19% sales gain for its key fashion and leather business in the most recent quarter.

LVMH is looking to sharpen its focus on the U.S., the company’s second-largest region by revenue behind Asia. Earlier this month, it opened a new Louis Vuitton factory in Texas in a ceremony that included President Donald Trump and his daughter Ivanka.

Tiffany, after a difficult period when it lost track of consumer trends and suffered from a slump in U.S. tourism, has been bouncing back under Chief Executive Officer Alessandro Bogliolo, revamping its New York flagship store with major investments targeting younger shoppers.

Bogliolo, a former executive of Bulgari and jeans label Diesel who was hired by the U.S. jeweler two years ago after hedge fund Jana Partners pushed for changes, has refreshed Tiffany’s marketing. The CEO said last month that he plans to open more stores in mainland China as a weak yuan deters the country’s consumers from spending overseas.

“Tiffany would become a better company and stronger competitor under the ownership of LVMH,” according to Rogerio Fujimori, analyst at RBC Capital Markets. He wrote in a note Sunday that jewelry is one of the most attractive categories in the luxury sector, “with only a handful of truly global players, and Tiffany has a proven brand equity in Asia.”

In jewelry, LVMH isn’t as dominant as in fashion. Adding Tiffany would expand the French giant’s potential market with somewhat more accessible offerings. Unlike Bulgari’s more-rarified offerings, such as 2 million euro ($2.2 million) wristwatch, Tiffany is better known for engagement rings that might cost a couple months’ pay.

Arnault is already the world’s third-richest man with a fortune of $96.5 billion, according to Bloomberg Billionaires Index. A deal for Tiffany would keep him ahead of Richemont’s Johann Rupert and Gucci owner Kering’s Pinault family in the race to consolidate the luxury industry. With sales of more than $50 billion, LVMH dwarfs Tiffany, which has about $4.4 billion.

If an agreement is reached, it would mark the latest push by a French acquirer to tap growth in the U.S. French technology company Dassault Systemes SE agreed in June to buy Medidata Solutions Inc., a software firm that analyzes clinical trials, for $5.7 billion. And last year, Axa SA acquired XL Group Ltd. for $15.3 billion, seeking to capture a bigger slice of the U.S. property and casualty market.

—The world’s biggest lighting company makes promises for a WiFi alternative—but 5G awaits
—As U.K. turns its back on the EU, Georgia desperately wants in
—A.I. regulation is coming soon. Here’s what the future may hold
—How a Chinese developer at Tencent is shaping the future of gaming
—Gojek’s founder resigned to join the Indonesian government. What’s next for the $10 billion startup?
Catch up with Data Sheet, Fortune’s daily digest on the business of tech.