What Is Oyo? Behind SoftBank’s Latest High-Growth, High-Valuation Bet 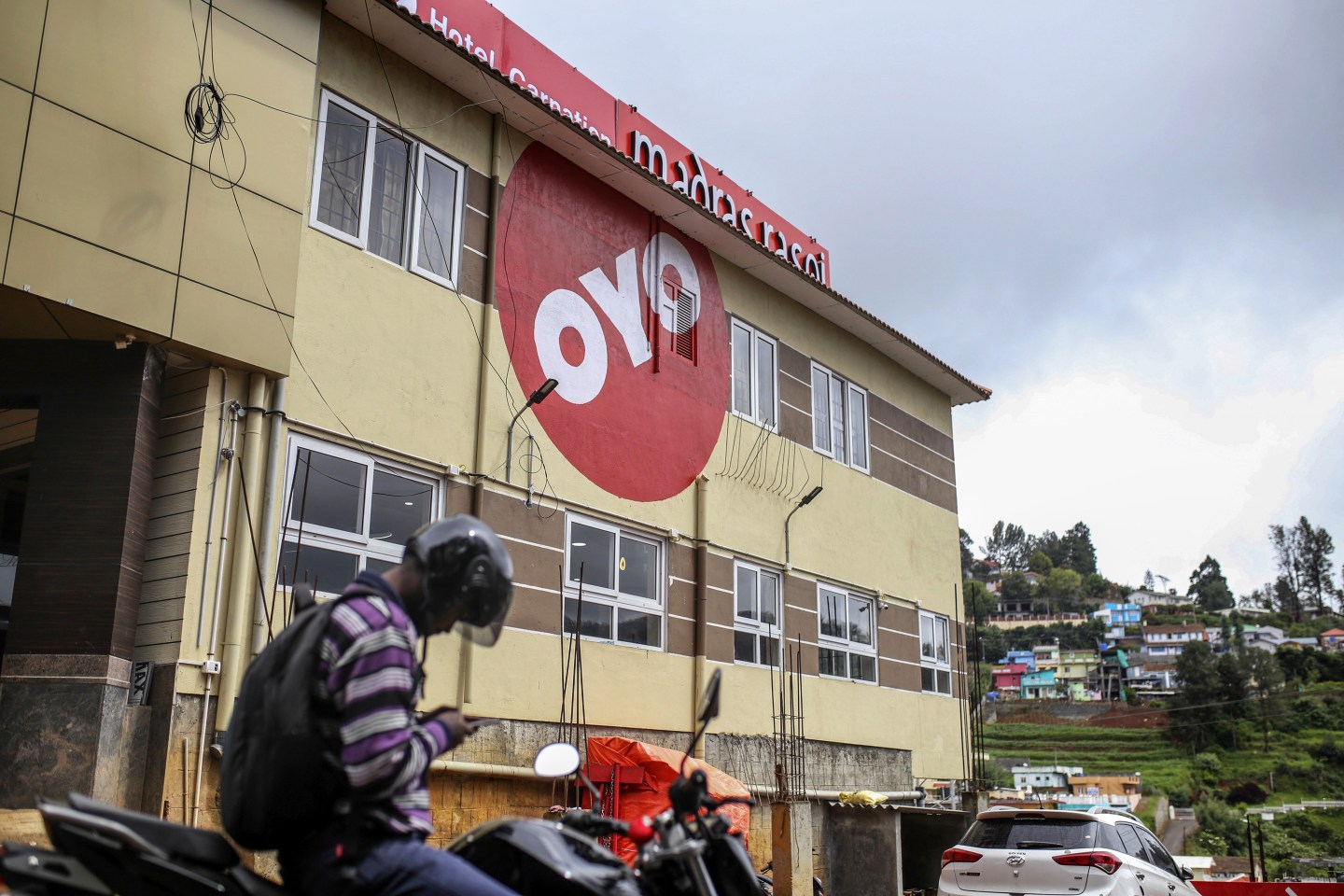 This Softbank-backed company has a wild valuation. Sky-high growth. Potential to disrupt an entire industry. And no profits in sight.

No, we’re not talking about WeWork. Meet Oyo. The hotel startup—based in India—renovates existing buildings and upgrades services to meet a set of uniform standards that has made it a global leader in the hospitality market. And it doubled its valuation to $10 billion after the company announced last week it is raising $1.5 billion in capital to expand its presence in foreign markets, including the U.S. and the U.K, according to a company statement.

Founder Ritesh Agarwal will lead the round financing, putting up $700 million, while other investors such as SoftBank and Sequoia India will pick up the rest of the tab. Agarwal secured loans worth $2 million from Mizuho Financial Group and Nomura Holdings, which he will use in part to purchase new shares of Oyo, according to Bloomberg.

Agarwal plans to use the rest of the loans to buy $1.3 billion worth of shares from Oyo’s existing investors as part of his previously announced plan to increase his stake in the company to 30%. He will use an entity called RA Hospitality Holdings to complete the transactions.

Oyo, which operates 1.2 million rooms in 80 countries, has been aggressive in its push to grow outside of India’s borders in recent months, and last week’s announcement falls in line with the company’s plan. Abhihav Sinha, chief operating officer for Oyo, told Fortune India in June the company wanted to “be in 15-20 large countries across the globe.”

The company purchased Amsterdam-based @Leasure, a vacation rental company, for $410 million in May while in the U.S., Oyo drew in Airbnb as an investor in April and also purchased the Hooters Casino Hotel in Las Vegas in August. The acquisitions excite investors who see Oyo dominating the hotel industry in the future.

But this unprecedented growth comes with some concern the company won’t be able to deliver a “high-quality living experience consistently” given the pace of expansion. Agarwal said in the interview with Fortune India that company has been profitable on a year-over-year basis at the building level after previously refusing to comment on when the company would be profitable to The Wall Street Journal in July. According to an October 7 press release, the company says EBITDA has improved by 50% on a year over year basis, and that losses as a percentage of NRV (net realizable value, an accounting term referring to a fixed or current asset’s worth when held in inventory have) “been on a steady and significant declining curve.”

Agarwal is certainly putting his money where his mouth is. While unusual for a founder to lead a financing round, the move seems to be an encouraging sign for investors, said Anat Alon-Beck, an assistant professor who studies unicorn companies at Case Western Reserve University.

“He’s not just maintaining control without putting money in—he’s also playing the game,” Alon-Beck said. “He’s showing investors, ‘Look, I can bring in money, too, from my own pocket. I took out loans. I have skin in the game. I’m risking my own capital.’”

Others, however, question whether it’s a red flag that Agarwal did not secure an institutional investor to head the round. Getting a well-known firm to be the lead equates to a vote of confidence for other investors, said Ken Ngyuen, CEO of Republic, an investment platform.

“The optimal approach would be to get an external institution,” Nguyen said.

While Nguyen said there’s nothing wrong with what Agarwal is doing, it’s a rather unique scenario for an individual to secure a loan of the size the 25-year-old was able to get. Nguyen thinks institutional investors are a “little more cautious” with Oyo now.

The company, which was founded in 2013, had raised $1.7 billion in previous rounds of funding and was valued at $5 billion before the recent funding news, according to Crunchbase. Agarwal keeps attracting high-profile investors like SoftBank, which will keep driving Oyo’s valuation higher, Alon-Beck said.

“You don’t need public markets for money if you’re a unicorn,” Alon-Beck said. “Once you’ve joined the unicorn club, you’re going to get plenty of investors.” Earning SoftBank’s seal of approval has been one of the first steps in reaching that goal because the investment fund brings “incredible validity to startups,” said Gabe Uribe of L.A. Tech House.

For SoftBank, it furthers the company’s move into India, where it has also invested in the country’s most-valuable startup Paytm, a digital payment firm that is valued around $15 billion.

That comes as other investments such as Uber and WeWork have left CEO Masayoshi Son “embarrassed and impatient” because of his recent track record.

But Uribe does not see these investments as indicative of SoftBank’s ability to spot value. He puts the failing performances on the startups themselves. “The fund’s job is to recognize and identify innovative technologies, which it has and continues to do,” Uribe said. “The fund is a tech incubator, not a financial advisory group. So I don’t think it’s fair to see mishandled IPOs as a reflection of Softbank.”

That may be, but certainly SoftBank is hoping that this high growth, high valuation bet turns out better than WeWork.

—How the man who nailed Madoff got GE wrong
—Is a “viral recession” coming? Why social media could amplify the next economic contraction
—10,000 jobs on the line as HSBC mulls its future in Europe
—Why the repo market is such a big deal—and why its $400 billion bailout is so unnerving
—If you think there’s something strange about the 2019 IPO market—you’re right
Don’t miss the daily Term Sheet, Fortune’s newsletter on deals and dealmakers.