This DaVinci Statue Could Go for $50 Million. But Is It Real? 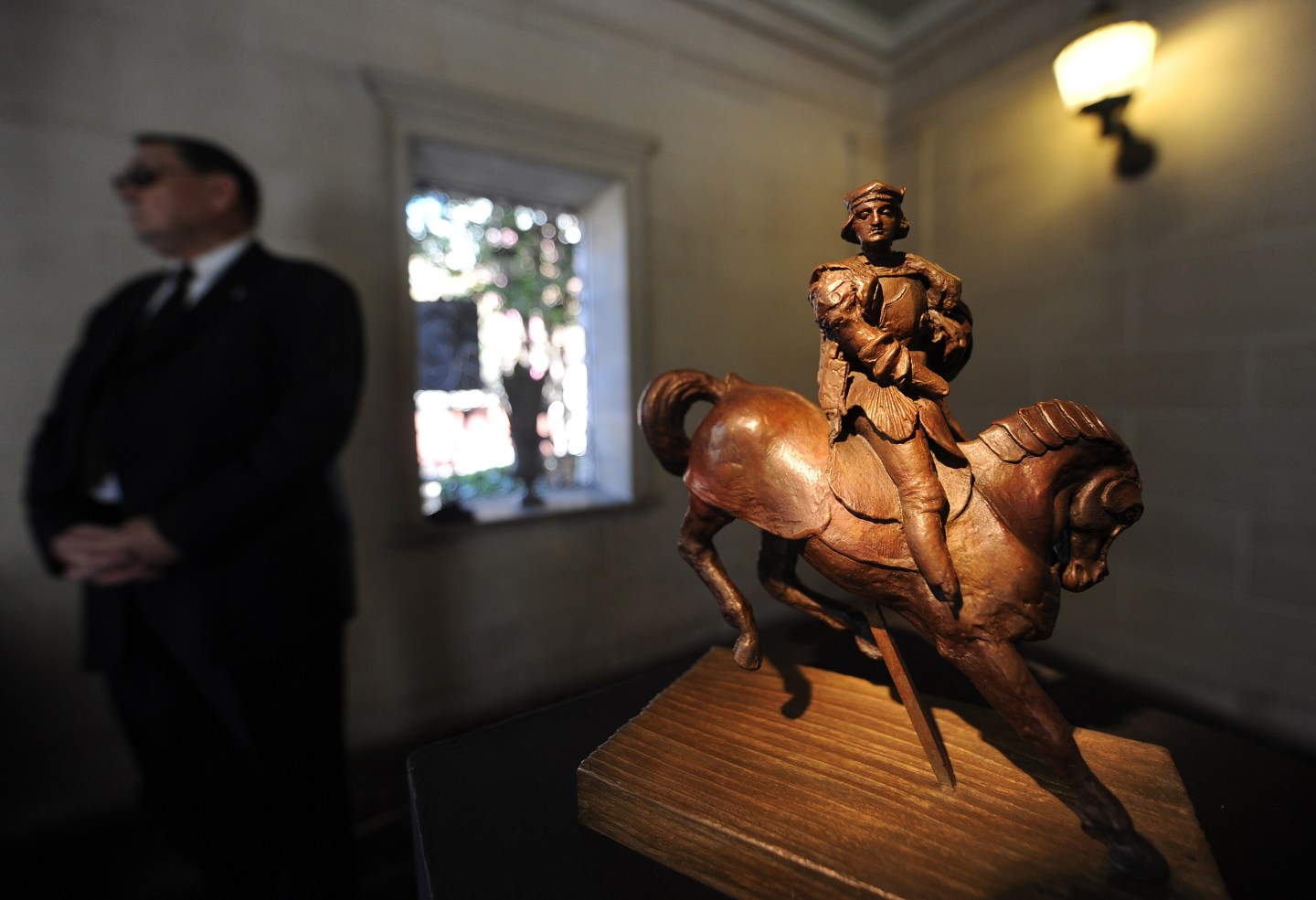 An 11-inch bronze sculpture said to be linked to Leonardo da Vinci sits in a bank vault on Manhattan’s Upper East Side.

“Horse and Rider” carries an estimate of $30 million to $50 million and is being offered for sale at the Pierre Hotel in New York this month, according to Guernsey’s auction house. But not everyone is convinced of its da Vinci origins. Dozens of similar bronzes already exist, raising more questions about whether the one hitting the auction block is truly unique.

The work depicts a nobleman on a bucking horse — purportedly da Vinci patron Charles d’Amboise, a French governor of Milan — in full military regalia. It was cast in 2012 with a mold taken from a beeswax model created more than five centuries ago, according to Guernsey’s. While the original’s current whereabouts are a mystery, late da Vinci scholar Carlo Pedretti, who wrote scores of books on the Italian Renaissance master, examined it in 1985, around the time it was made.

“In my opinion, this wax model is by Leonardo himself,” Pedretti wrote in a typed letter that the auction house cites in its promotional materials.

“It seems to me not credible as a Leonardo sculpture,” said Martin Kemp, a da Vinci authority and emeritus professor of art history at Oxford University who examined the model several times over decades. It “has none of the characteristics of understanding horse anatomy and Renaissance armor that you would expect from Leonardo.”

Francesco Caglioti, an art history professor at Italy’s prestigious Scuola Normale Superiore whose expertise includes medieval sculpture, said a good scholar should study an object directly before making a determination. But in this case he made an exception.

“Sometimes a work is so ridiculous and impossible that a scholar like me feels authorized to speak,” he said. “This thing has nothing, nothing, nothing to do with Leonardo. I can’t imagine it was done before the late 19th century. It looks like a revivalistic work by the hand of somebody who tried to imagine a Renaissance horse and rider.”

Scholarly disagreement is common whenever a work attributed to da Vinci surfaces. There’s still a debate over the exhaustive restoration of Salvator Mundi, which fetched $450 million at Christie’s in 2017, becoming the most expensive artwork ever sold.

Arlan Ettinger, Guernsey’s president, said he struggled to put a price on “Horse and Rider.” Only four contemporary sculptures, three by Jeff Koons and one by Louise Bourgeois, fetched more than $30 million at auction, according to Artnet data.

“The sale of Salvator Mundi doesn’t mean that everything automatically gets swept up in that craziness,” he said in an interview in a viewing room at the JPMorgan Chase & Co. branch that’s safeguarding the statue. “You can say, ‘How can a contemporary bronze be worth millions of dollars?’ But without a precedent you can argue that it is the only lingering example of this work of art that survived the centuries, and hence it is important.”

Guernsey’s, which Ettinger helped found in 1975, specializes in collectibles. It has auctioned off items including the baseball Mark McGwire hit for his then-record-breaking 70th home run, Jerry Garcia’s guitars and Princess Diana’s jewels.

The auction house will offer the bronze without a reserve, meaning it can sell at any price. The lot also includes the latex mold from which it was made.

Silverpoint Holdings, a Nevada-based investment group, bought the mold and the bronze from Richard Lewis, a real estate developer who owned the mold for about three decades until his death in 2017. His widow Karen Lewis said her husband took ownership of the mold because it was collateral for a $40,000 loan to a friend who failed to repay it, and he mostly kept it in a closet in their Indianapolis home.

“He brought it out during dinner parties,” she said in a phone interview. “He had a real affection for it.”

Then the 2008 financial crisis struck and the couple, then in their 60s, lost almost everything and filed for bankruptcy.

But they still had the mold, and it provided a financial lifeline.

The foundry also made a broader edition of “Horse and Rider,” with four different patinas.

At least 70 pieces were made and sold, said Rod Maly, chief executive officer of a Las Vegas art gallery who helped promote the project with Lewis, and later for Silverpoint, where he’s a manager.

Maly said the appraisal that Guernsey’s used to set its estimates for the auction was done by his son, Brett Maly, president of the gallery and a certified appraiser.

The mold was created in the mid-1980s to preserve the original beeswax figure, then owned by David Nickerson of Mallett antiques in London. It was in poor shape. The horse’s ears and one limb were missing, as were the rider’s leg and hands.

“Beeswax wasn’t designed to last 500 years,” Rod Maly said. “The latex mold was made to ensure the integrity of the figure. That wax may be a pile of chips by now.”

But with scores of other bronzes in circulation, is the one being offered for sale on Oct. 30 truly one-of-a-kind? Language on a website used by the foundry to promote the replicas creates more doubt because it asserts that they, too, were created directly from the mold.

“The language was incorrect on our website,” said Brett Barney, the foundry’s president. When asked how this happened, he said he had used information provided by Lewis.

The foundry created just one bronze from the 1985 mold that touched the original beeswax figure, Maly and Barney said. That bronze was then used to make two second-generation molds for the limited edition, they said.

Bronzes in the subsequent edition are slightly smaller and less precise than the bronze being offered by Guernsey’s, he said.

—Most Powerful Women 2019: See who made the list
—Meet the women leading Netflix into the streaming wars
—How Starbucks got its buzz back
—Old Navy is about to sail away from Gap Inc.—and into some choppy waters—The world champions of women’s soccer—and equal pay
Subscribe to Fortune’s The Loop newsletter for the latest on the revolutions in energy, technology, and sustainability.