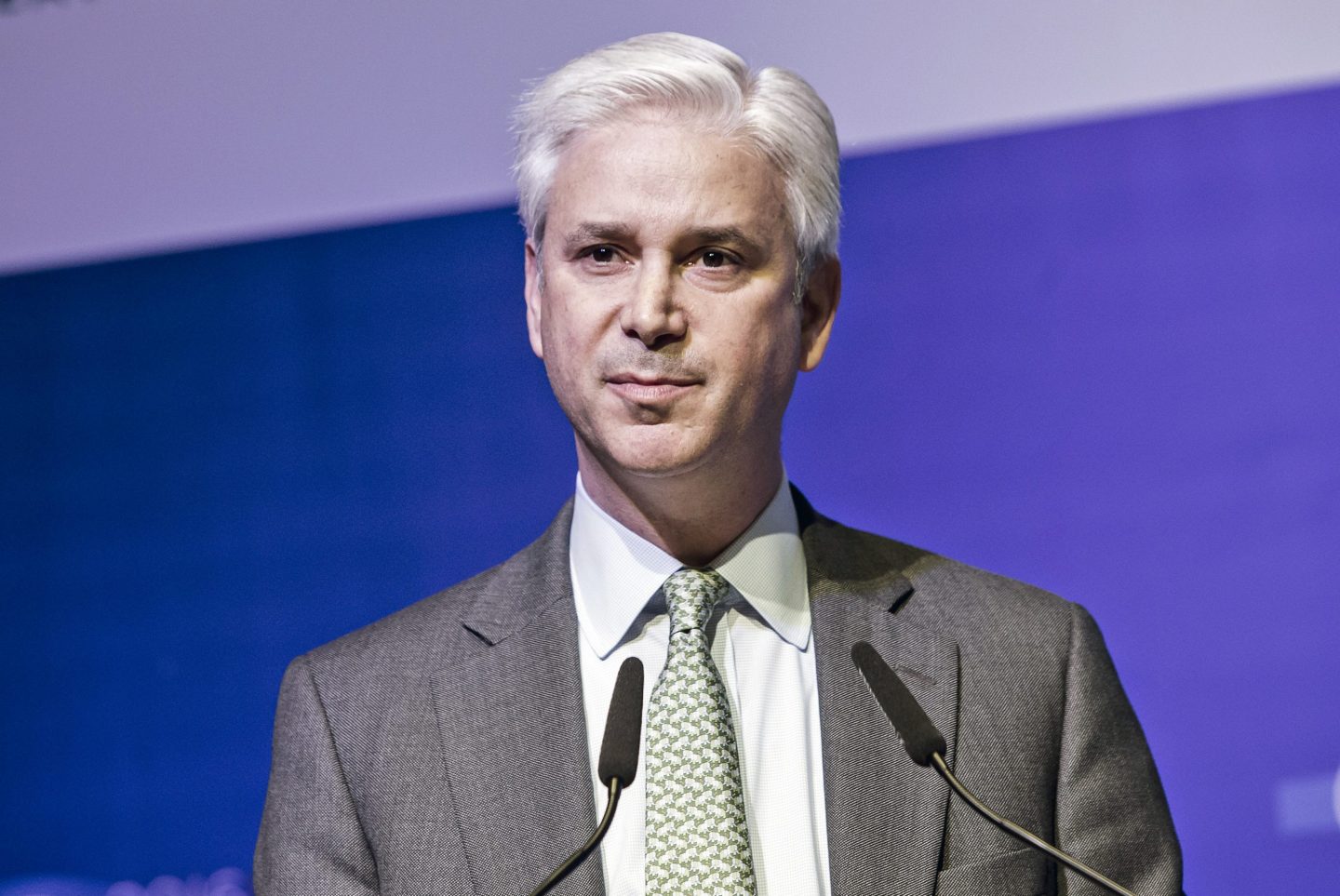 On Tuesday, the San Francisco-based financial services giant announced that Charles Scharf, the CEO of Bank of New York Mellon, will take over as Wells Fargo’s CEO and president starting Oct. 21. The news caps off a months-long search for a permanent successor to Tim Sloan, who resigned as CEO in late March amid mounting pressure from federal regulators and Capitol Hill legislators. (Allen Parker, Wells Fargo’s general counsel, has been serving as interim CEO since Sloan’s departure.)

In Scharf, Wells Fargo has found a savvy, experienced banker who’s made the rounds at some of the nation’s most important financial services firms. Having started his career at Commercial Credit Corp. in the late 1980s—where he became a protege to one Jamie Dimon—he went on to hold top roles at Citigroup’s investment banking division and, later, JPMorgan Chase’s retail banking division.

But it is 54-year-old Scharf’s more recent endeavors that Wells Fargo surely looked to in tapping him to lead the troubled firm. In 2012, he left JPMorgan to become CEO of Visa, holding the top job at the credit card and payments behemoth until leaving for the same role at custodian bank BNY Mellon in 2017.

It is that blend of experience—in the realms of both traditional banking and the more forward-thinking, tech-driven world of electronic payments—that led Wells Fargo to Scharf as the man to guide the bank out of the most tumultuous period in its 167-year history.

He certainly has his work cut out for him. The bank is still dealing with the fallout from numerous scandals over the past decade—from its high-profile fake-accounts scandal, to its questionable mortgage and auto lending practices, to red flags in its foreign exchange and wealth management businesses.

The consequences have included billions of dollars in penalties and a Federal Reserve-imposed asset cap that has hindered Wells Fargo’s ability to grow its balance sheet. The bank has also become a punching bag for Washington’s war on Wall Street greed—with Democratic presidential candidate and Massachusetts Sen. Elizabeth Warren proving a particularly vehement critic.

Scharf’s arrival alone won’t change that dynamic. In addition to the Federal Reserve’s asset cap, Wells Fargo remains under the watchful eye of the Treasury Department’s Office of the Comptroller of the Currency (OCC) via an April 2018 consent order related to its myriad scandals. As a result of that order, the bank had to run its selection of a new chief executive by the regulator, and an OCC spokesman confirmed to Fortune that the agency provided a “supervisory non-objection” on Scharf’s hiring.

While Scharf may have gotten the all-clear from regulators, that doesn’t account for the continued scrutiny he’ll face in D.C. from the likes of Warren and the Rep. Maxine Waters-led House Financial Services Committee. Even a 110-page independent investigation into Wells Fargo’s sales practices that cleared Tim Sloan of wrongdoing wasn’t enough to spare him the ire of the bank’s political opponents—and Scharf shouldn’t expect to be treated any differently.

“There’s going to be a tremendous amount of attention on him from the House Financial Services Committee, and certainly on the Senate side from Senators Warren and [Sherrod] Brown,” says Mayra Rodriguez Valladares, managing principal at capital markets consultancy MRV Associates. “They’re going to be looking at everything he does, and analyzing it with a fine-toothed comb… He’s not going to have any honeymoon.”

Scharf himself seems to be well aware of regulatory waters he’ll have to navigate. “We know we have a series of regulatory issues that we need to complete the work on,” he said on a Friday morning conference call discussing his appointment. “And so that is clearly the first priority—it’s been the first priority. And we’re going to make sure we don’t miss a beat on that.”

A good place to start, according to Valladares, would be for Scharf to “make clear to the entire organization that he is very serious about eradicating the abuses” that have thrown Wells Fargo off-course.

That sentiment was echoed by the Committee for Better Banks (CBB), a bank employee advocacy organization, which noted that Scharf’s predecessors made only “incremental shifts that kept Wells Fargo’s toxic work culture in place.”

“Mr. Scharf has an opportunity to actually listen to us, to help us feel safe enough to steer the bank toward better consumer protections, and actually be open to hearing when management is behaving dangerously,” Alex Ross, a Wells Fargo bankruptcy specialist and CBB member, said in a statement. Ross is among the Wells Fargo employees who have publicly voiced concerns about the bank’s sales practices, as well as a retaliatory work environment against those who speak out against them.

But beyond regulatory and cultural issues, there is the matter of an actual depository institution to run. And in Scharf, some analysts believe Wells Fargo has found the ideal leader to guide it through a rapidly evolving banking sector.

“For [Scharf], it’s about building a vision for the company going forward,” says Kyle Sanders, an equity analyst at Edward Jones who covers both Wells Fargo and BNY Mellon.

That vision must place a greater emphasis on technology, which has helped some of Wells Fargo’s competitors become “much more productive and efficient” while Scharf’s new firm has been left behind.

“If you compare Wells Fargo to some of their peers, they’re grossly inefficient,” Sanders adds. “[Technology provides] a huge opportunity to reduce costs and take out branches. We’re talking about being able to process loan applications quicker, and using artificial intelligence to determine credit risks.”

Sanders says he believes boosting Wells Fargo’s technological infrastructure is “where [Scharf’s] focus is going to be,” given how he took similar measures to improve and streamline BNY Mellon’s own legacy tech platform. “That’s why [BNY Mellon] brought him in [from Visa]; he made a lot of changes, in terms of increasing investments in technological capabilities,” Sanders notes.

Scharf, for his part, said on the Friday morning conference call that he arrives at Wells Fargo with no “preconceived notion that there’s got to be some kind of dramatic change” at the bank.

“You don’t know what you don’t know about [Wells Fargo’s] franchises until you get inside,” he said. “I think the business model itself is fundamentally sound, and it’s the question of how we go about driving the business.”

So far, Wells Fargo shareholders appear to be optimistic about what the Scharf era may hold. The bank’s stock shot up nearly 4% on Friday, closing at $50.71 per share.

But as Federal Reserve chairman Jerome Powell noted earlier this year, there is no quick fix to the “deep-seated” issues at Wells Fargo. That’s something that Scharf himself may be about to find out.