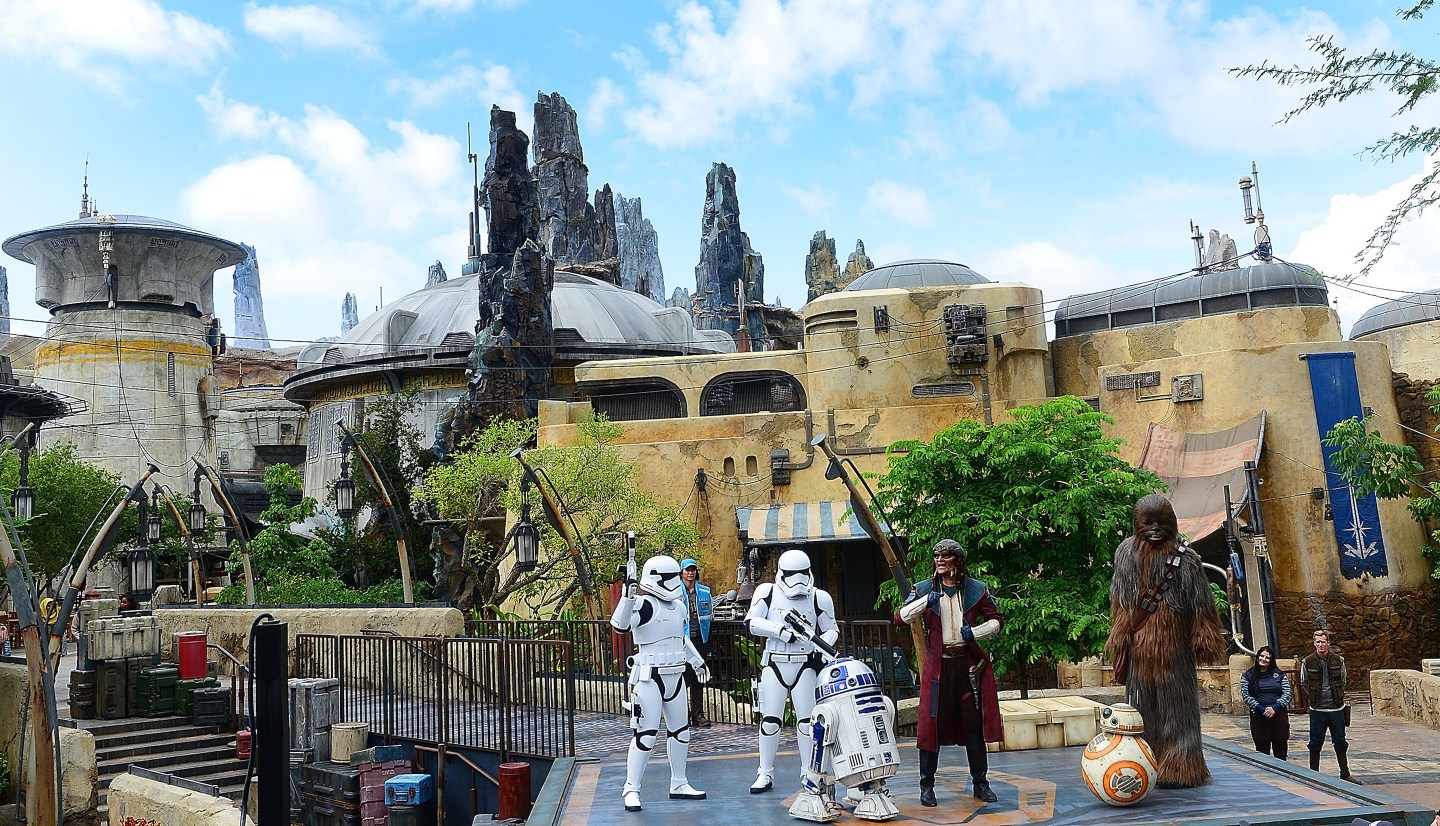 The Force is strong with Disney and Star Wars, but it may be no match for Hurricane Dorian.

But the weather was expected to deteriorate each day as Dorian approaches.

As of 11 a.m. EDT Friday the storm was just 1 mile per hour below the 111 mph (178 kph) threshold for becoming a major hurricane. Meteorologists expect it to become a major storm later in the day and keep growing until it becomes a Category 4 intense hurricane.

Dorian is forecast to hit southern Florida with winds around 140 mph late Monday or early Tuesday, according to the National Hurricane Center. There’s increasing talk among experts about the possibility, still unlikely, of a Category 5 storm with winds of 155 mph or more.

“It is the perfect storm,” said Dennis Speigel, president of International Theme Park Services Inc., an Ohio-based consulting firm. “Here they’ve been waiting to open this — the attraction was delayed from the earlier part of the season — and they finally get situated to get it opened and they have a hurricane.”

In the long run, it may be just a blip for Disney, but the storm’s impact for the week could cost Disney $60 million to $90 million as locals stay away to make hurricane preparations and out-of-town tourists cancel their reservations, Speigel said.

Disneyland in California also opened a Star Wars land earlier this summer, and that too had smaller crowds than expected.

In an earnings report earlier this month, Disney CEO Bob Iger said that some people had stayed away from Disneyland out fear there would be huge crowds at the Star Wars land. That contributed to a 3% dip in attendance at U.S parks for the third quarter.

The Star Wars land wasn’t the only thing opening this week at Disney World.

The resort was kicking off its beloved annual Epcot International Food and Wine Festival on Thursday and its annual Mickey’s Not-so-Scary Halloween Party is revving up.

Before Hurricane Dorian started menacing Florida, Jessica Armesto and her 1-year-old daughter, Mila, planned to go to the Halloween party and attend a breakfast with Minnie Mouse, Donald Duck and Goofy at Disney World. Instead, Armesto now plans to be sheltered at her mother’s hurricane-resistant house in Miami with a kitchen full of nonperishable foods in case the power goes out.

“It felt like it was better to be safe than sorry so we canceled our plans,” Armesto said.

During past hurricanes, Disney World in Florida has closed the gates to its four parks — Magic Kingdom, Epcot, Hollywood Studios and Animal Kingdom. Disney World hotels remained open, but the parks were closed briefly during Hurricane Irma in 2017 and Hurricane Matthew in 2016.

On any given day, Disney World can host more than 300,000 visitors.

Disney World’s policy says that if a hurricane warning is issued within seven days of a planned vacation, the guest can reschedule or cancel. Armesto said she had no problems with that, though there was a tinge of regret with the character breakfast since she had stayed up until 2 a.m. one night trying to land a hard-to-get reservation with the classic characters.

An inquiry to Disney World about the number of cancellations or change requests this week wasn’t answered.

Ben Cline, his wife, Jen, and their two grade-school-age children were ending their Florida vacation to head back to North Carolina a little bit earlier than planned on Saturday because of the hurricane.

“We don’t want to be caught traveling,” he said.

But the family managed to get into the Star Wars land in the wee hours Thursday by arriving at Disney’s Hollywood Studios by 3:45 a.m. They said the visit was worth it, despite the prospect of getting stuck in traffic with people fleeing Florida ahead of the storm.

“It’s amazing! The details of it are out of this world, literally,” Cline said. “It’s certainly worth coming down for.”

—Dorian nears major storm status as it churns toward Florida
—What D23’s newly revealed mega slate tells us about Disney+
—Franchise fever is taking over Disney’s theme parks
—If Martin Scorsese can’t end Netflix’s battle with movie chains, who can?
—The Joker and The Laundromat are among the buzziest trailers as Venice kicks off