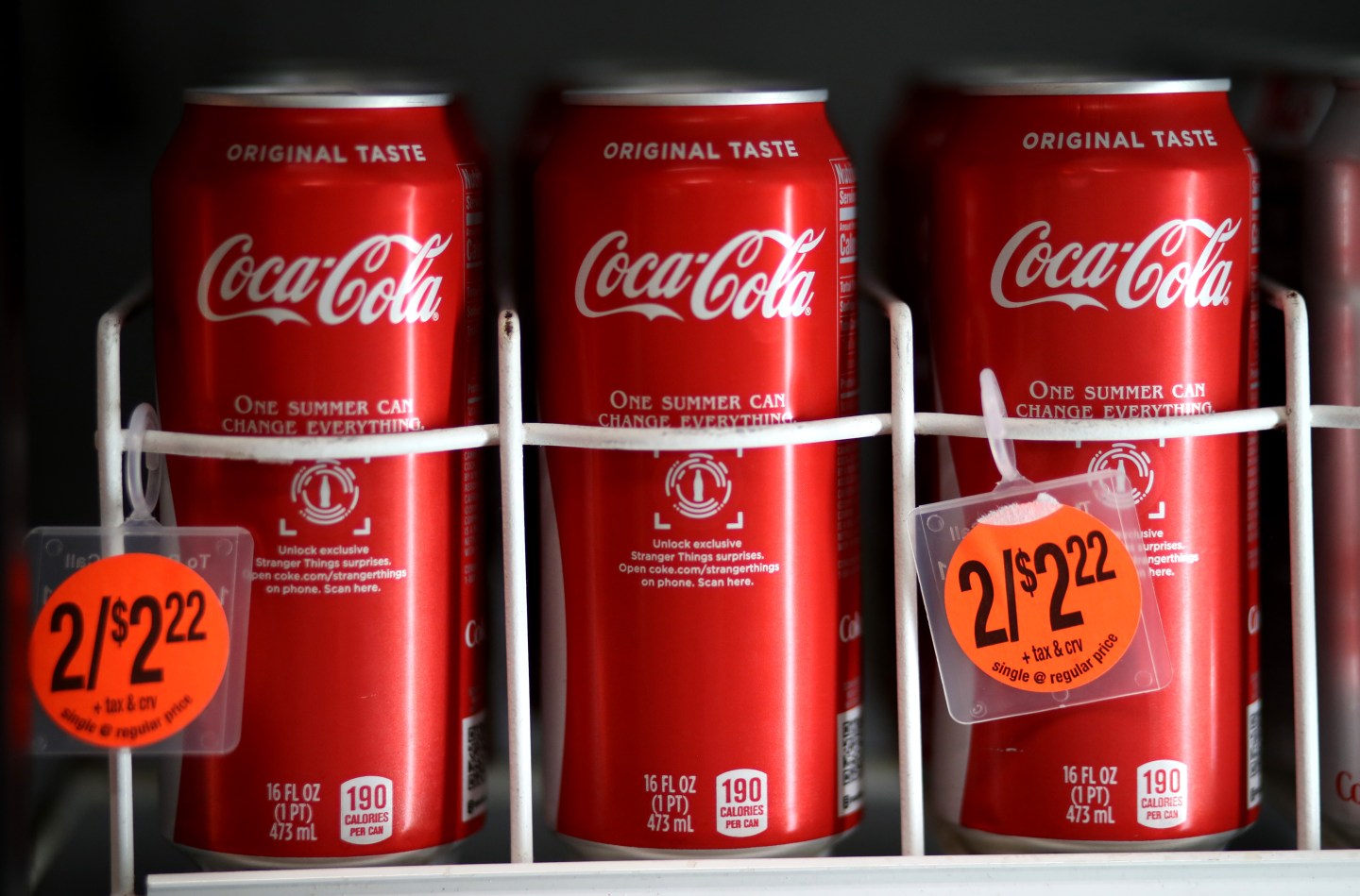 Drink makers are increasingly using cans of different shapes and sizes, driving up shares of companies such as Ball Corp. SAN RAFAEL, CALIFORNIA - JULY 23: Cans of Coca Cola are displayed on a shelf at a convenience store on July 23, 2019 in San Rafael, California. Coca Cola beat analyst expectations with second-quarter earnings of $2.6 billion, or 63 cents a share compared to $2.3 billion, or 54 cents one year ago. (Photo by Justin Sullivan/Getty Images)
Justin Sullivan—Getty Images

It’s had an absolute ball of a year.

Ball Corp.—a company that most consumers only know obliquely through the Ball-branded mason jars it once sold, beat out biosciences and tech companies that have often dominated the rankings recently to become the second best performing stock on the S&P 500 index over the past 12 months.

Nearly a century-and-a-half old, Ball enter the war against plastic early, and now controls about 33% of the global market share for metal cans. And now, that, combined with jittery markets and a boom in so-called healthier beverage choices have benefitted the company, which spun off its jar business in the 1990s and now runs an aluminum packaging business as its crown jewel.

While the S&P 500 index returned a paltry 2% over the past 12 months in part due to escalating trade war tensions, shares of Ball Corp. have soared 91%.

The $25 billion company by market capitalization, that serves the likes of Anheuser-Busch InBev and Coca Cola, ranks just behind MarketAxess, a bond trading platform, in terms of returns over the past 12 months.

For several years, consumer demand for the bread and butter of the industry—soda and beer—had been declining due to health concerns and dragged on the Ball’s shares. But seltzers, ready-to-drink-cocktails and other options have taken their place, boosting beverage sales 3% to $56 billion in 2018, per Nielsen’s data.

Roughly 90% of Ball’s $11.6 billion revenue comes from beverage packaging (the other 10% comes from the company’s aerospace unit).

“If you went into a convenience store in 1986, the bottles and cans maybe had different colors,” said Chip Dillon, a partner at Vertical Research Partners. “With the number of beverage brands out there, to get people to notice you, you need many different sizes and shapes. Number two, plastics have become the bad guys—and the cheapest alternative to plastic is aluminum.”

Take Liquid Death for example. In May, the company raised $1.6 million in seed funding and sells canned water branded not only to appear comically “hardcore,” but also to emphasize how metal is more sustainable than plastic. Alongside the catch phrase “murder your thirst,” the can also features the hashtag, “DeathToPlastic.” While 70% of an aluminum can is recyclable, the label claims, just 3% of a plastic bottle are.

“The sun is setting on the age of plastic packaging,” he said in May.

Advocates have long warned consumers of plastic build up in beaches—but the movement against plastic, especially of the single-use variety, hit the U.S. market full force this year.

Cities including Los Angeles and Vancouver are in the process of banning or restricting the use of plastic straws, while major companies including Starbucks, Hyatt, and Hilton plan to shrink their plastic footprint. Pepsi said it plans to serve Aquafina-brand water in aluminum cans. China, which was the dumping ground for much of the world’s recycling in the past, ended such imports in 2018 and, in the process, created a trash crisis stateside.

Seeing a pushback against plastic, Ball has been a bet on sustainability for some investors.

The can maker is also doubling down. In an answer to red solo cups now native to any college campus or cookout, the company plans to release reusable aluminum cups.

Can the run continue?

By one measure, the stock is expensive with a price-to-earnings ratio is at a 47 times earnings. In 2018, that figure was 27. “That is a run,” notes Wayne Wicker, Chief Investment Officer with Vantagepoint Investment Advisers. “Is the stock vulnerable to a pull back? It’s not outside the realm of possibility.”

Moreover, the stock’s rise can’t entirely be attributed to the company. Recession fears have also pushed investors into defensives stocks like Ball, that feature steady growth and low volatility. The S&P 500 Consumer Staples Index, which includes the likes of Procter & Gamble, Coca-Cola, Pepsi, and Walmart, has risen 12% in the past year.

“There’s been greater uncertainty with some geopolitical and tariff concerns, many of those things clouded investors outlooks in terms of future earnings growth,” added Wicker.

But for now, the bulls have kept the Ball rolling.

—Boeing adds a second flight control computer to the 737 Max