What Is Article 370? The Kashmir Crisis Explained 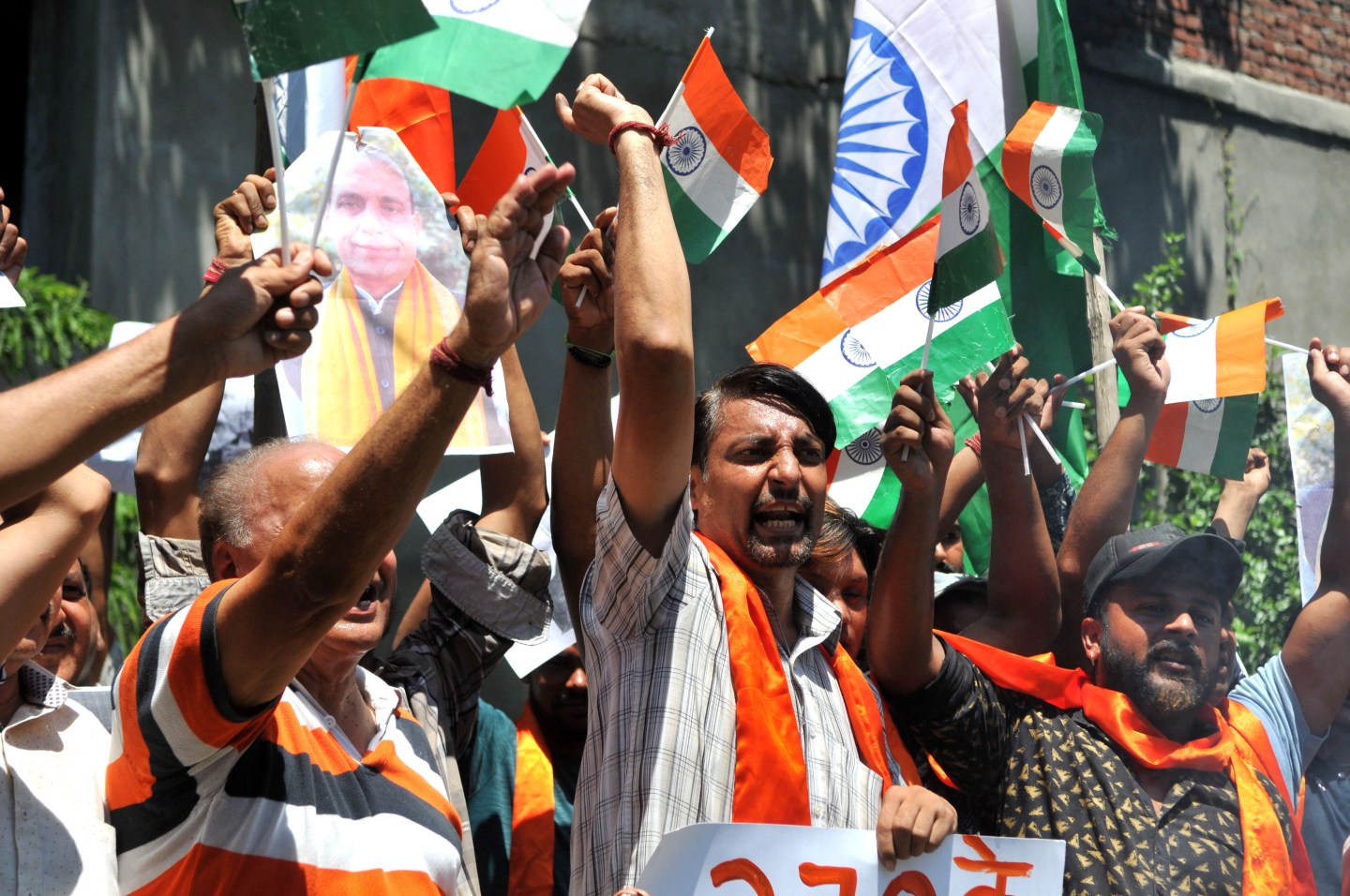 Members of the Dogra Front shout slogans against Pakistan during a protest demonstration on August 8, 2019 in Jammu, India. According to the news reports, Pakistan announced to unilaterally downgrade diplomatic relations with India in the wake of Indian government move to revoke special status for Jammu and Kashmir. Indian Home Minister Amit Shah moved a resolution in the parliament that repeals Article 370, and said the state will be split into two Union Territories, Kashmir with an Assembly and Ladakh region without one.
Nitin Kanotra—Hindustan Times via Getty Images

The United Nations is the latest to weigh in on the crisis involving Kashmir and India. The world body said Prime Minister Narendra Modi’s actions earlier this week “will exacerbate the human rights situation.”

The Indian government has cut off telecommunications to the region of Jammu and Kashmir, driven out tourists and journalists, stationed approximately 35,000 additional troops there, and revoked the section of the Constitution pertaining to the region’s sovereignty over a tangled web of economic development, politics, and religion.

This is just the latest in a decades-long conflict. India and Pakistan have fought multiple times over the region, which also borders China to the east, and this is at least the 51st time India has pulled the plug on mobile and internet communications—in 2019 alone.

Rupert Colville, spokesperson for the UN High Commissioner for Human Rights, said in a video posted to Twitter that India has taken “what is already a bit of a pattern to a new level.” In the UN’s estimation, the Indian government has cut off communications as a method to “muzzle dissent” from within the region.

Here are some important points to note about the current situation that has dragged on all week.

Article 370 is a constitutional provision that gave Jammu and Kashmir its special status. The origins go back to 1947, when India earned independence from the British and subsequently split with what is now Pakistan. Jammu and Kashmir had, effectively, been the only majority-Muslim state to join India at the time.

A series of presidential orders passed from 1950 onward gave Jammu and Kashmir the ability to have a separate constitution and autonomy over state laws regarding ownership of property, citizenship, and other laws that specifically covered rights under a sub-section referred to commonly as 35A.

The entire article, including 35A, was revoked on August 5, but this is not the first time the government has attempted to curtail the sovereignty of Jammu and Kashmir.

Ather Zia, a professor at the University of Northern Colorado who also hails from Kashmir, told Fortune “the onslaught to 370 has happened under all governments, so meddling with it is nothing new—but this the vilest of it all” because she considered an attack on democracy from the world’s largest democracy.

Suchitra Vijayan, who founded hybrid journalism and research organization The Polis Project, told Fortune it was a “well planned and executed” attack on democracy carried out just months after holding an election with 900 million voters. In her estimation, Delhi has taken the democratic rights away of at least 13 million of its citizens by revoking Article 370.

Is it a matter of economics, political posturing, or religion?

The short answer is, yes. While there are Hindus living in Jammu and Kashmir, it is a Muslim-majority state and Modi is renowned for his Hindu nationalist leanings. In 2005, under the George H.W. Bush administration, Modi was denied a U.S. visa for his support of Hindu extremists during riots in his home state of Gujarat. After his first victory in 2014, Modi tried to assuage critics by waxing poetic on economic development and strides in renewable energy projects. It had worked well enough for a victory in May of this year, but some have said the timing of this is to distract from the current economic downturn.

Modi recently said during an address that Jammu and Kashmir, largely undeveloped and far less densely populated than the rest of India, could be a massive tourist hub and destination to film Bollywood movies.

Supporters of the decision cite statistics from the Reserve Bank of India on how per capita income for the “average Indian” has increased four-fold in the last decade, but for those within Jammu and Kashmir income has only doubled. Still, they fared better than the far eastern states in India which have been largely ignored by the capital for decades.

Proponents also argue the biggest advantage to revoking Article 370 is to open up property ownership to the rest of India.

“If things improve with time, the Valley might not remain a union territory always and the people will be able to choose their own representatives soon,” Modi said, suggesting the current status is temporary. However, he did not address why that necessitated cutting off landline, internet, and mobile phone lines in and out of the area.

Others point to a consistent pattern of anti-Muslim rhetoric from the ruling Bharatiya Janata Party (BJP) as the underlying reason behind the decision, with economics used as a convenient front. Zia said Kashmiris fear this sort of “demographic terrorism” to open Kashmir’s culture, land, and sovereignty in a bid to make it more like the rest of India, the “saffronization” of the state, as she called it.

Revoking Article 370 has been on the BJP agenda for years and was openly discussed during the May elections. However, Vijayan said part of the problem is a lack of awareness among the Indian electorate about the gravity of this fundamentally undemocratic decision.

Zia explained, Kashmiris “are not attached to article 370 as their means of loyalty to staying with India,” but it had become a legal fixture over time despite various administrations’ attempts to chip away at it and bring the region into the fold of Delhi. Really though, the “movement of self-determination” is an essential part of understanding the relationship between Kashmir and India, said Vijayan.

Is this even legal? What happens now?

Dr. Ayesha Ray, a political science professor at King’s College in Pennsylvania, told Fortune she questioned the legality of it. Technically, it could be removed with the permission of the Jammu and Kashmir Constituent Assembly, which Ray explained had dissolved itself in 1957 and essentially made Article 370 permanent. Treme Court had ruled in 2018 that “Article 370 had acquired permanent status making its abrogation impossible.”

Through a series of presidential orders and citing this lack of a state government, Delhi decided to change the words “Constituent” to “Legislative Assembly” in 2018. For about a year, Kashmir was run by a governor appointed by the ruling BJP after it broke ties with a local political party.

The Legislative Assembly was dissolved last June, opening the door for the current situation. The question now is if changing that term is just semantics and whether the Supreme Court ruling should be upheld.

Calling Article 370 “the glue” which had essentially bound Kashmir to India and was, at times, used as the justification for conflict with Pakistan, Ray said the decision brings up a series of international law questions.

Because of the provisions laid out in the article, India only really had issues of foreign affairs, defense, and communications. But Ray asked, “Does the revoking of Article 370 make Jammu and Kashmir an independent state? And if that’s the case, does it make India an occupier? Because as long as the article was tied to the Indian Constitution, India could still have legitimate claims to Kashmir.”

Modi argued in his speech days after the decision that Article 370 “did not give anything except separatism, corruption, terrorism, and family rule. Pakistan used Article 370 as a tool to spread terrorism.” However, Ray explained revoking it may actually just “embolden Pakistan’s claims” on the region. Islamabad just announced it was downgrading diplomatic ties and putting a freeze on trade with Delhi in light of the situation.

Specifically, she noted it “plays right into the hands of terrorist groups making it easier for them to radicalize disenfranchised Kashmiri youth,” who have grown frustrated from repeatedly being cut off from the rest of the world, constant police and troop presence, and, in part, not being included in the same foreign aid and development schemes as the rest of the country has been.

A day after the decision was made, a bill came to Parliament proposing that Jammu and Kashmir become Indian territories, legally somewhat akin to Puerto Rico and the U.S., but if thousands of U.S. troops occupied San Juan. Jammu and Kashmir would have a legislature and Ladakh, the eastern region bordering Tibet and China would be a territory as well, albeit with no legislative body at all.

Vijayan compared the relationship to that of Israel and the West Bank. Ray noted: “One cannot make the case for integration, peace, and prosperity through brute force…One can’t hold your own people hostage.”

—After the El Paso shooting, a call for stronger protections for Mexicans in America