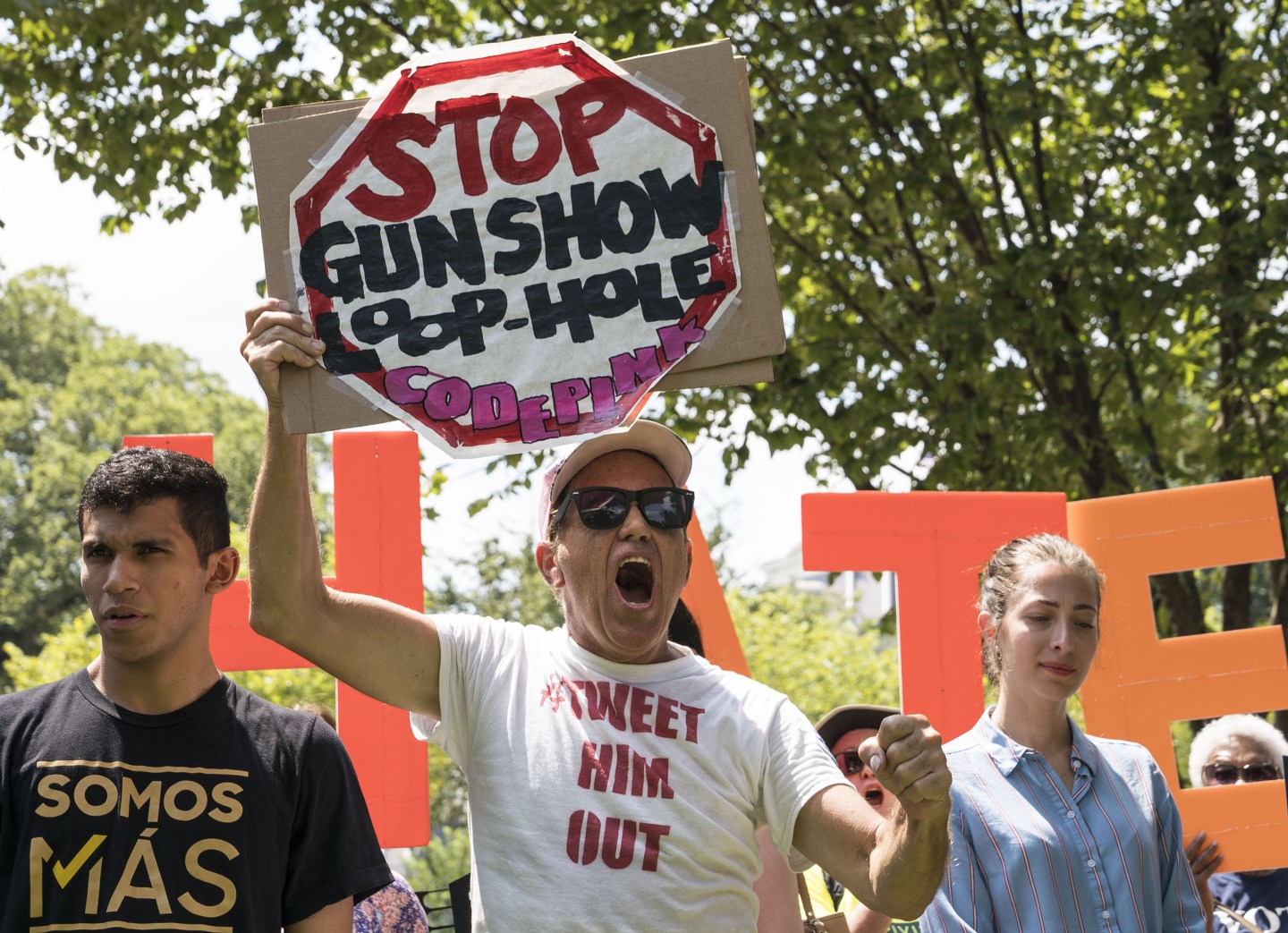 Demonstrators protest in support of gun control legislation outside the White House in Washington, D.C., U.S., on Tuesday, Aug. 6, 2019. President Trump is looking at the background-checks legislation passed by the House and other bills, and the administration would consider solutions, laws or executive actions that actually make people safer, an aide says. Photographer: Sarah Silbiger/Bloomberg via Getty Images
Sarah Silbiger—Bloomberg via Getty Images

Even if you’re anti-gun, you might be surprised to find that you’re supporting the gun industry.

Indeed as communities in Ohio and Texas deal with the aftermath of two more mass shootings, the thought that the average investor might be supporting gun companies may seem farfetched. But it’s not: some of the world’s biggest funds and ETFs, run by companies such as Vanguard, BlackRock, and others are among the largest shareholders of publicly traded gun stocks.

The Vanguard Group, holds stakes in three publicly traded gun manufacturing companies via its funds. According to data from Morningstar Direct, Vanguard holds 4,927,112 shares in American Outdoor Brands across 14 funds, 1,769,788 shares in Sturm Ruger & Co. Inc. across 19 funds and 5,891,492 shares in Vista Outdoor Inc across 20 funds.(While Vista Outdoor recently sold its gun manufacturing sector it remains in the ammunition business.)

A spokesperson from Vanguard said that “a modest subset of Vanguard funds owns firearm stocks” adding that 23 out of the firm’s 417 funds hold shares in the country’s top two gun manufacturers.

“We are deeply saddened by the senseless tragedies of gun violence across the United States. We share concerns about public safety and hope that policymakers take appropriate actions to protect Americans from gun violence,” a spokesperson from Vanguard told Fortune over email.

Vanguard also says that investors can use their online tool to search where exactly their money is being invested. “We believe choosing to divest from certain securities is a personal decision. Vanguard understands that some investors may want to reflect their personal beliefs in their investment holdings, and may wish to avoid certain companies. We offer investment options that enable clients to reflect those personal beliefs in their investments.”

As for the world’s largest asset manager, a spokesperson from BlackRock, acknowledged that after the tragedy at Parkland, the firm launched two new ETF funds that would include screens to exclude civilian firearms: iShares MSCI USA Small-Cap ESG Optimized ETF (ESML) and iShares ESG US Aggregate Bond ETF (EAGG).

A BlackRock spokesperson explained that in general, 401k plans do not include ETF funds, so part of the firm’s response to Parkland included strategies that offered “pooled funds available to certain institutional investors such as U.S. pension plans seeking firearm-free funds for employee retirement programs such as 401k plans,” BlackRock said in a client update.

The firm also released a statement on “BlackRock’s Approach to Companies that Manufacture and Distribute Civilian Firearms” that outlines the firms approach to engaging with gun stocks.

Some non-profit leaders are encouraging investors to do their homework. Penny Okamoto, executive director at CeaseFire Oregon, says she often counsels people looking to “unload their 401ks” to reduce gun violence. “Make sure,” she says, “that you are not unwittingly supporting gun manufacturers.”

Morris Armstrong, founder of Armstrong Financial Strategies, suggests investors make use of socially responsible fund screens, should they “abhor the idea of investing in a manufacturer of weapons.”

Anyone can access Morningstar’s individual investor website which shows the top 20 firms invested in a given company, at no additional cost. The company also offers a deeper dive through its investment analysis platform called Morningstar Direct.

For supporters of gun control, it’s one concrete step towards making sure guns—and your money—don’t fall into the wrong hands.

—The trouble with regulating big tech

—Will A.I., blockchain, 5G, and VR give companies a competitive edge?