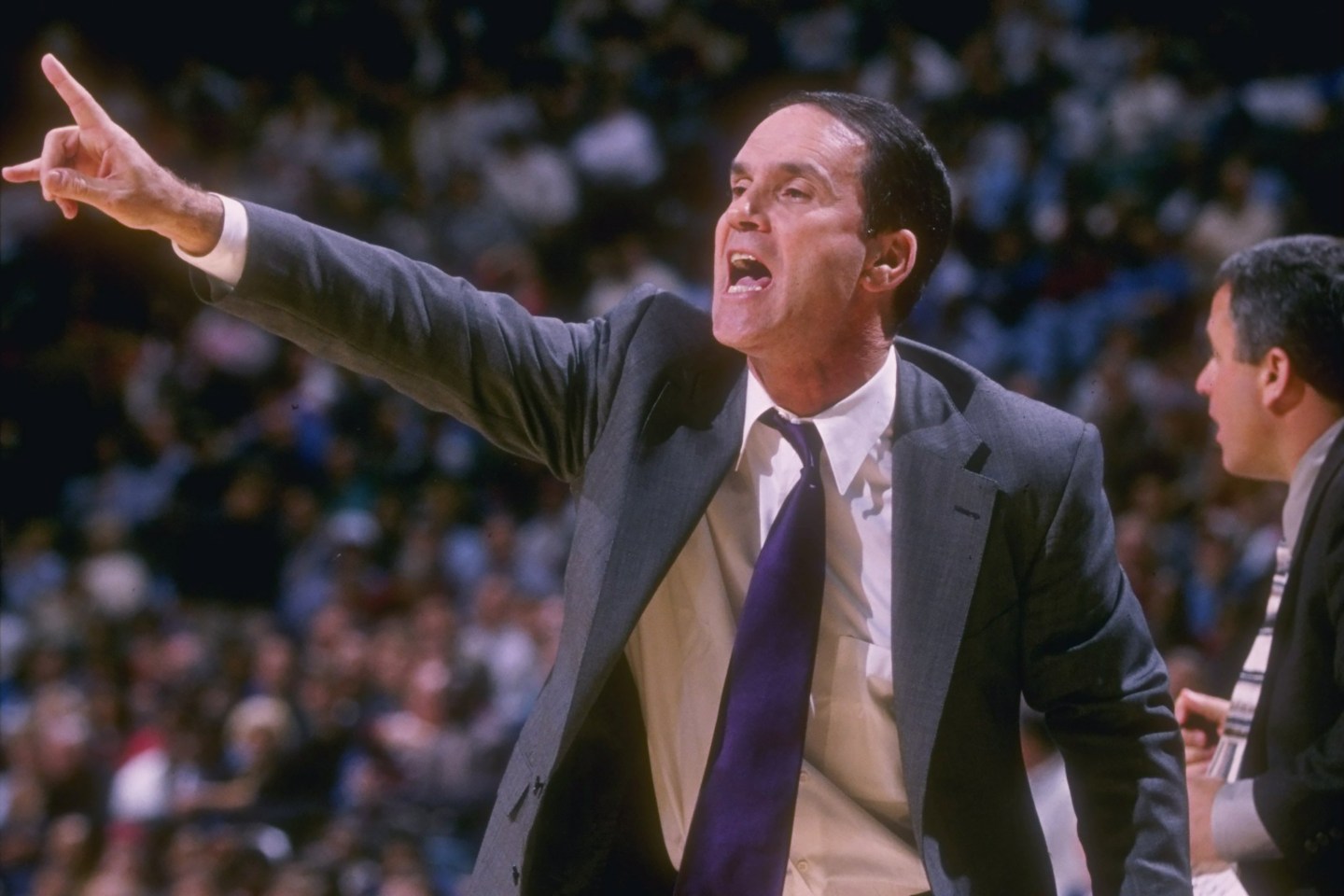 One year into her new job as the athletic director at the University of Pittsburgh in early 2018, Heather Lyke was facing the most important decision of her tenure. Men’s basketball coach Kevin Stallings was in the midst of a winless season in the Atlantic Coast Conference, and a change was in the offing. Hiring a new football or men’s basketball coach are among the most important decisions that a high-major athletic director will make, as millions of dollars are invested on a yearly basis into those programs and the coaches make seven-figure salaries. So before Stallings had even coached his last game for the Panthers, Lyke found herself in South Carolina meeting with former coach-turned-hiring consultant Eddie Fogler about filling her soon to be vacant job.

“These searches are significant undertakings,” said Lyke, who had previously worked at Ohio State, where Fogler had been involved in its coaching search the year prior, but did not know Fogler personally before 2018. “It’s something that we plan very thoroughly and thoughtfully. I wanted to be overprepared if anything as it related to this search. I thought it was an extraordinary experience and I think very highly of Eddie Fogler.”

With the help of Fogler, Lyke and Pitt hired Duke assistant Jeff Capel to fill the Pitt coaching vacancy. Fogler’s job as a consultant for Pitt came to a close with the signing of the contract, yet in October he flew up to Pittsburgh on his own dime to meet again with Lyke and watch Capel and the Panthers practice.

“I feel like I am now invested in Pitt basketball,” said Fogler, who watched from afar as Pitt, under Capel, won six more games than they had the previous season and showed significant improvement as the year went on. “It’s extremely gratifying when a guy that you helped place has success, just as it’s hard when you help place a guy at a school and the program struggles. It’s an inexact science and I can’t guarantee results. If I could, I would charge a lot more.”

The NCAA pulls in over $1 billion per year, with the lion’s share of those earnings coming from college basketball and the television revenue that the NCAA Tournament hauls in annually, so finding coaches capable of guiding a team deep into March Madness has become all the more important.  Fogler, now 71, has become one of the true  go-to guys for finding the perfect basketball coach. From the early fall until the nets are cut down at the Final Four in April, Fogler can be found either sitting in front of multiple screens watching coaches from all over the country or on the road and in arenas watching them coach in person. He says that he watches games every night, focusing not on the big-name guys, but instead on up-and-comers at the low- and mid-major level. His clients are athletic directors, but he still is a member of the coaching fraternity, and brings a certain amount of institutional knowledge to his searches that comes from knowing what makes coaches tick on a personal level. Plus, he knows basketball.

“I think I have as good a feel as anybody doing this as to who can really coach,” Fogler said. “In all aspects. We’re talking about style of play, bench decorum, X’s and O’s, clock management. I’m looking at all of this through an ex-basketball coach’s eyes, not some corporate headhunter.”

But he sort of stumbled into the whole coaching consulting gig. He was always a basketball junkie, and had seen his fair share of success during his coaching career. He spent 15 years as an assistant at his alma mater, North Carolina, during which time the Tar Heels won legendary head coach Dean Smith’s first national title in 1982 when a freshman named Michael Jordan nailed the game-winner jumper to beat Patrick Ewing and Georgetown (Fogler had been instrumental in the recruitment of Jordan). Four years later, Fogler took his first head coaching position at Wichita State, where he led the Shockers to two NCAA tournament appearances in three years before moving on to Vanderbilt, where he reached a Sweet 16 in 1993. South Carolina was next, where he coached for eight years before “surrendering,” as he puts it, from coaching in 2001.

He tried his hand at broadcasting for a few years to stay in the game, working for both CBS and Fox Sports as color commentator. After the 2005 season, Fogler got a call from an old friend. Tim Weiser, who had worked with Fogler at Wichita State was now the athletic director at Kansas State and was looking for some help in finding the school’s next basketball coach. Fogler helped the Wildcats land former Cincinnati coach Bob Huggins to lead the program, but didn’t think he had stumbled into a new career at the time.

The next offseason, Fogler was talking to Big Ten commissioner Jim Delany, a good friend and former teammates of Fogler’s when the two played at UNC in the late 60s. Delany told Fogler that he might receive a call from the athletic director at Michigan, who was looking for a new head coach. After the Wolverines, with Fogler’s help, landed West Virginia coach John Beilein (ironically, Huggins would leave Kansas State after one season there to take the now open job at his alma mater, West Virginia), Fogler Consulting was born.

“My search business has been all word of mouth amongst athletic directors,” Fogler said. “Most AD’s who are making coaching changes talk to other people about who they used, and I get referenced. I stick to what I know, and I think that I can give good, sound advice.”

The biggest criticism around search firms in college athletics has been the appearance of nepotism in who gets shortlisted for openings. And a firm that places both coaches and athletic directors must be vigilant to guard against conflicts of interest. Fogler, who only deals with basketball coaches, bristles at the idea of nepotism playing a role in who gets what jobs.

“I have people who I know and who have coached with me that tell me that I would not believe the number of assistant coaches who would like to meet me,” he said. “They think it’s like ‘get to know Fogler and he’ll set you up,’ and it really kind of ticks me off. “Your resume gets you the job, not me,” he added, saying that he hasn’t even met the coach he just placed at Idaho State this year, Ryan Looney.

Fogler, who this past spring guided searches at Arkansas, UNLV, Mercer as well as Idaho State, is a one-man shop, which he argues affords him the opportunity to be a bit more hands-on in the search process, as well as give each of his clients a more personal attention.

On the other end of the spectrum is Glenn Sugiyama and DHR International. DHR is one of the true boldfaced names in the executive search business and Sugiyama is the head of the firm’s sports practice.

“There are a lot of different sized firms in our space,” said Sugiyama, citing one-man firms like Fogler’s or others run by former athletic directors. “We’re different. We’re one of the largest executive search firms in the world. We have offices in 22 countries. We look at this very corporately. We use the same business practices that we use say in our financial services practice. The fact of the matter is there are millions of dollars on the line in college athletics these days. It’s big business, and there is a lot of pressure on our clients to get it right. But we do more searches in a year than most athletic directors will do in a lifetime. So we’re able to help normalize the process.”

Over the past decade, there has been a noticeable drop in the number of minority coaches hired to lead top jobs. The job of athletic director used to be little more than an emeritus position for old coaches who would “retire” to the front office once their days on the field or court came to an end. Now, as more and more money has poured into college athletics via television deals, most people in the role have either spent their careers on the administrative side of athletic departments or come to the job with business experience, but little to no pedigree in athletics. Both Sugiyama and Fogler stressed that the athletic directors, not the search firms, decide which coaches are hired.  But as in all business environments, people in hiring positions tend to hire either people they know or people who remind them of themselves. Just 10 of the 65 coaching jobs at the Power 5 level in college basketball are currently filled by people of color, as opposed to 24 of 73 jobs at the end of 2005-06 season (that year, 26.2 percent of all Division I college basketball head coaching jobs were filled by minorities, a high-water mark in hiring diversity according to research done by The Institute of Diversity and Ethics in Sport.) Whether corollary or causality, this dip has coincided with the rise in importance of search firms in the hiring sphere.

Sugiyama would not go as far as to say that search firms have been a part of this problem, but did admit that he is one of only a few, if not the only, prominent minorities in this field. Five schools from the seven major basketball conferences hired African-American coaches this past spring. Michigan, which hired alum and former NBA star Juwan Howard, and Vanderbilt, which hired former NBA player Jerry Stackhouse, both feature athletic departments that are headed by African-Americans. (Warde Manuel at Michigan and Malcolm Turner at Vanderbilt are two of the just ten African-American AD’s at Power Five schools). Temple, Tulane and St. John’s, all of whom are not in Power 5 leagues and were the only other universities in the major conferences to hire an African-American head coach this past cycle, did not use search firms.

Sugiyama, who is a fourth generation Japanese-American whose grandfather was sent to an internment camp during World War II, said that he is mindful of the issue and tries to make sure that the he puts a diverse pool of candidates in front of his clients. But he acknowledged that a problem does exist.

For this year, the college basketball coaching carousel has stopped, which means that for Sugiyama it’s time to take a deep breath and move on to conducting other sports-related searches for professional teams and for administrative positions within college athletics. For Fogler, he’s prepping for a fall trip to Pocatello, ID, to finally shake hands with Looney at Idaho State and take in a couple of practices to observe the Bengals new head man.

“I like getting out to see the campuses and say hi to the AD and see how and check in on the coaches and say hi and see if they need anything,” Fogler said. “I get vested with these guys. I really do.”