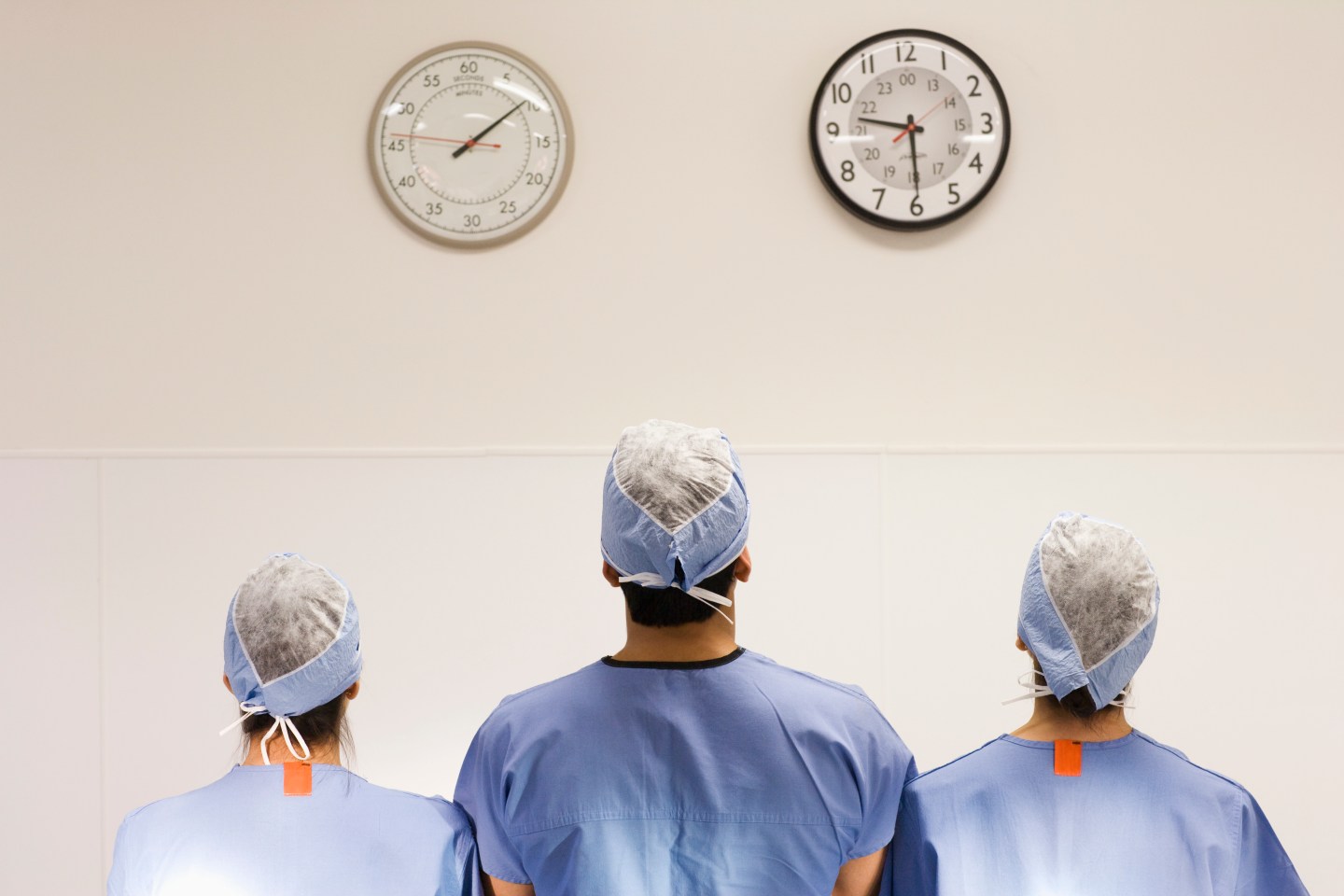 It’s arguably the most prominent case of centralized workforce planning in U.S. history. Result? Our aging population has exposed that freezing the supply of specialist physicians is an Rx for long waits, inflated prices, and an unhealthier America.

For the past quarter century, the following conviction’s been a cornerstone of U.S. healthcare policy: America has too many heart surgeons, neurologists, psychiatrists and the like, and far too few primary care doctors. That’s a nice theory, but it’s not what the marketplace is showing. The on-the-ground bidding for newly-minted doctors by that hospitals, HMOs and big medical groups that now employ almost 90% of all newly hired physicians, is signaling that America needs more of every kind of practitioner. And the biggest need is precisely for the specialists whose ranks our Congress and federal health care agencies are determined to cap.

A new survey from from America’s top physician recruiting firm (“2019 Review of Physician and Advanced Practitioner Recruiting Incentives”), Merritt Hawkins of Dallas, presents strong evidence that the gap between demand and supply is even more acute for specialists that for primary care physicians, and that the gulf is growing. (Merritt Hawkins is a unit of AMN Healthcare, the nation’s largest healthcare staffing firm.) No observer has better real time data on doctor market than Merritt Hawkins; it’s survey is based on the 3,131 search assignments it conducted for employers in the 12-month period from April 1, 2018, to March 31, 2019. The report covers the average number of searches for each type of practice, the salaries and other compensation offered in twenty categories of doctors by hospitals and medical groups, and the trends in pay over the past few years.

Here are Merritt Hawkins’ findings that underscore how demand for specialists has surpassed even the still-robust bidding for family physicians.

Merritt Hawkins conducted 78% of its assignments in medical specialties in the 12 months ended in March, compared to 67% four years ago. By contrast, searches for primary care practitioner, a category that encompasses family doctors, internists and pediatricians fell from one-third to less than one-fourth.

In many specialty categories, the surge was stunning: The number of searches jumped from 24 to 148 for radiologists, from 36 to 86 for cardiologists, and 18 to 70 for anesthesiologists.

The demand for specialists versus primary care practitioners is especially pronounced when the volume of assignments is measured versus the number of doctors practicing in each category. By that yardstick, the top nine practice groups are all specialists, led by neurology, psychiatry, gastroenterology, and hematology/oncology.

Phil Miller, the Merritt Hawkins communications chief who authors their reports, notes that family physicians graduating from residency programs are still in high demand, and typically receive multiple job offers. That specialists are even more sought-after underscores how hot that market has become.

Because public policy has driven a higher proportion of medical graduates into primary care, the flow of younger doctors into many specialties has slowed. As a result, a large proportion of the practitioners in those fields are nearing retirement age.

Sixty-one percent of all psychiatrists, and sixty percent of cardiologists, are 55 or older. Roughly half of America’s neurologists, orthopedic surgeons and urologists have reached or surpassed that milestone. Over one-third of all doctors in New Mexico, Hawaii, New Jersey and Maine are over 60. Since the number of young doctors entering those specialty fields trails the older practitioners who are leaving, the shortage in specialties crucial to seniors will only get worse.

Salaries don’t reflect these doctors’ full compensation. Seventy-percent of the offers included signing bonuses averaging $33,000, more than two-thirds of the recruits were also promised incentive compensation based on such metrics as revenues generated, and patient outcomes.

What about student debt? Doctors in average leave school with $191,000 in loans. One-third of employers offered forgiveness programs averaging $102,000.

New doctors get loads of offers

In a survey of 20,000 physicians entering the marketplace (“2019 Review, Final-Year Medical Residents,”) issued earlier this year, Merritt Hawkins found that two-thirds of the new MD’s received 52 or more recruiting offers, and 45% got over 100. The volume of overtures to specialists and primary care doctors is about the same, highlighting that far more positions are available than new practitioners to fill them for virtually every area of practice.

Waiting times are long and getting longer

Because hospitals and medical groups can’t hire nearly as many doctors as they need to serve the growing ranks of their mostly-older patients, it’s no surprise that Americans are faced with longer and longer waits to see a family practitioner or orthopedic surgeon. In still another report (“2017, Survey of Physician Appointment Times”), Merritt Hawkins’ data showed that the average wait for an appointment in fifteen large metro areas increased 30% from 18.5 to 24.1 days from 2014 to 2017.

The booking-to-visit period for family medicine was around a month in most cities, including Portland, Miami, Atlanta, Denver and Detroit. For specialists, the delays were also in the month-long range for cardiology, but even longer for other specialties, notably OB-GYN at 49 days in Seattle and 39 days in Atlanta, and dermatology, 78 days in Philadelphia, 51 days in Denver, and 35 days in L.A.

This tightest-of-tight markets shows that the U.S. isn’t producing nearly as many doctors as employers can put to work. The result is a severe shortage of physicians, a situation acknowledged by the profession’s education establishment. By 2030, the Association of American Medical Colleges predicts a total undersupply of as many as 121,300 doctors, equivalent to 15% of the MD’s active in the U.S. The AAMC forecasts that 55% of the shortfall will be for specialists.

What accounts for the chronic, and growing, shortage? The doctor headcount entering the market each year is governed by the number of residency positions where tomorrow’s doctors must train in order to obtain licenses to practice in the U.S. Those programs are funded primarily by the Centers for Medicare and Medicaid Services (CMS). In 1997, Congress froze funding for medical residencies, based in part on the view that minting more doctors, especially specialists, inflated healthcare costs, and capping the supply would help keep expenditures in check.

The upshot of the novel “lowering the supply curbs cost” strategy is that residency positions have expanded by just 24%, from 23,000 to around 29,000 over the past forty-one years, a period when America’s population has expanded 43%, and the ranks of folks over 65 has surged from 25 to 55 million.

Virtually all of the super-modest growth in slots has gone to primary care positions, in part to better staff urban and rural areas hardest-hit by the doctor deficit. In general, the CMS has focused on shifting the mix of residency slots from urology, psychiatry, cardiac surgery and the like to primary care, while more or less imposing a hard cap on the total number of physicians produced each year.

It’s rapidly becoming clear that the longstanding policy of tightly controlling the size and composition of the doctor supply is failing the needs of a medical marketplace that’s moving in a different direction. The dominant, and fastest growing, source of revenues for hospitals and group practices are aging patients that need more heart surgeries, hip replacements, counseling for depression and the sundry services and procedures furnished by specialists.

“It’s a study in ‘demography as destiny,’ says Miller of Merritt Hawkins. “It’s obsolescence, peoples’ bodies and minds break down, and they need to go to the orthopedist, the urologist, or the cardiologist. Their utilization rate of the procedures and screenings keeps growing. What they need most is specialists.” He points to a report from the Healthcare Cost and Utilization Project finding that between 2000 and 2014, the number of hip replacements in the U.S. rose more than two-fold from 160,000 to 372,000.

By penalizing what had been rampant over-utilization, and driving patients to use a primary care doctor as their “quarterback,” the new model did manage to squeeze out costs. America’s overall health bill kept increasing, but the pace slowed from 7% from the 1990s through 2007, to 3.9% last year. But the shift was more of a tourniquet than a cure. The CMS now projects that health care costs will rise by 6% a year, four points faster than inflation, through 2026.

When you couple fast-rising demand with a cap on supply, the logical result would a rapid escalation in costs. And after a brief respite, that’s just what America is getting.