Suburban Sticker Shock: Why Does the Same House in L.A. Cost Three Times as Much as Atlanta? 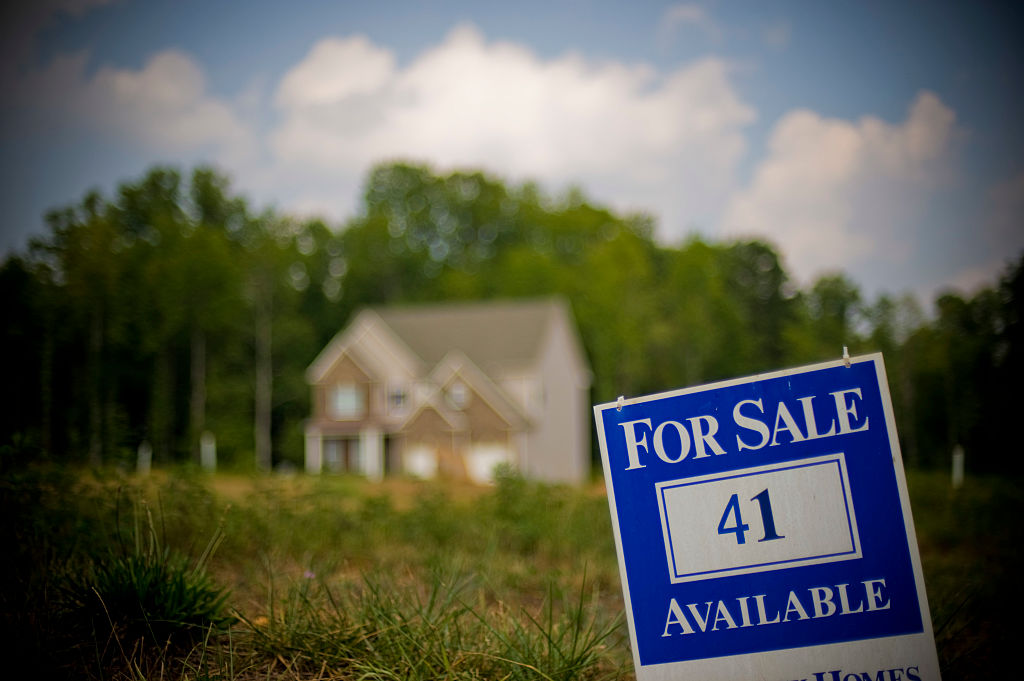 Brace yourself for the ultimate sticker shock in the life of an American family.

Your company is relocating its headquarters from Atlanta to Los Angeles, and since you prize the middle manager job you’ve held for 20 years, you’re making the move with your wife and two kids. You want to live in the kind of average-sized, three-bedroom, two-bath, sub-2000-square-foot house that you own in Atlanta. But as you learn house-hunting in the L.A. ‘burbs, a home with the same living space as your old one, in Spanish-style stucco instead of brick, in another 1990s subdivision where olive trees supplant Atlanta oaks, on another postage-stamp-sized lot, costs over three times more, around $680,000 compared with under $220,000 in your old home town.

Sure, you’ll get a raise because L.A. is so much more expensive than Atlanta. But you’ll still face the no-win financial choice families dread: Exchange your roomy ranch-with-a-yard for a cramped but affordable garden apartment, or trade the box in Atlanta for what’s essentially the same box in L.A. that costs almost half-a-million dollars more. Stretching to own means living house-poor, cutting contributions to the kids’ college fund, and spending vacations driving to Disneyland and Venice Beach instead of jetting to Bermuda.

This incredible disparity between prices for the average home in Atlanta and L.A. exemplifies the gulf between two separate Americas in housing. One is what I’ll call the “Gridlocked Coasts,” a category that encompasses the metro areas of New York, Boston, Washington, D.C, Miami, Seattle, Portland, San Francisco, and of course L.A., among others.

The second I’ve titled the “Bargain Belt,” consisting of around two-dozen Sunbelt cities, among them Atlanta, Dallas, Houston, Memphis, Raleigh, Nashville, and in an exception to the premium-priced pattern on coasts, such Florida markets as Jacksonville and Orlando. (The Bargain Belt also includes such highly affordable rust belt metros as Columbus, Pittsburgh, and St. Louis, but they differ from the Sunbelt cities in generating much slower job growth. So for purposes of comparison to the coastal markets, I’ll limit the analysis of low-cost cities to the Sunbelt.)

So what explains the puzzler that if you could uproot the same house, on the same lot, in Nashville, and transplant the property in another aging row of tract houses in Seattle, it would cost 88% more ($481,000 versus $256,000)? An obvious explanation would posit that the coasts are generating more jobs and hunger for housing. But the opposite is true: Employment since 1990 grew 77% in Dallas, 76% in Nashville, and 98% in Orlando, dwarfing the numbers in Washington, D.C. (33%), San Jose (28%) and Boston (22%).

In fact, the big price disparity between the Bargain Belt and Gridlocked Coasts arises from the interplay between the number of people arriving to take new jobs, and the dearth or abundance of newly-built homes going on sale. Let’s examine those dynamics. When cities attract workers, households bid up prices in the market for older, existing homes. But as American Enterprise Institute economist Ed Pinto puts it, “Homebuilders respond to increasing home prices with differing degrees of intensity in different places.”

In cities where land that’s zoned for new housing is plentiful, and developers can divide those tracts into lots at relatively low costs, builders will pounce on the trend of rising prices by constructing sundry new homes. In general, that picture is typical of the Sunbelt, though even there constraints are increasing. By contrast, in metro areas with restrictive zoning — with high fees on land development and regulations requiring developers to spend five years or more to turn raw land into finished lots — new subdivisions rarely rise even as the prices of existing homes surge. And because minting building lots is so expensive, homebuilders tend to erect homes aimed at the top of the market, affordable only to the affluent. That’s the scenario in L.A., Seattle, and the rest of the Gridlocked Coasts.

In other words, it’s chiefly about the cost of land rather than the expense of labor and materials, which are relatively consistent across the country.

Put simply, what makes the Bargain Belt a great deal, and gouges homebuyers on the coasts, is the amount of new construction, which in turn depends on the cost of creating the building lots those houses sit on. A little-known urban economist named Richard U. Ratcliff made this point in a 1949 treatise, and Pinto credits him in a recent report. The solution to housing affordability, wrote Ratcliff, “is the rate of housing production that will release a sufficient number of used dwellings to successively lower income groups.”

If workers are moving into a city, even at a low rate as in many coastal metros, and new construction is minimal, the new buyers will bid only on what’s for sale, almost exclusively existing homes. The folks who sell can’t move up to new houses, because few are being built, so they also have to buy an older home. Because both the new buyers, and the sellers who become buyers, are all bidding for a fixed stock of older houses, aging homes sell at lofty prices that spike even higher anytime employment waxes even modestly.

On the other hand, where medium-priced construction is plentiful, arriving families have the option of purchasing a new house or more likely, an existing abode that’s, say, fifteen years old, for a lot less. Think of how new car buyers put their used vehicles on the market, creating options for young and lower-income folks. The families that sell don’t exert nearly as much pressure on the static pool of existing homes (which in fact shrinks because many old houses fall apart and get demolished). That’s because there are plenty of new houses for them to buy. And when they sell and move into a spanking-new subdivision, they put their older home on the market, swelling the supply of existing homes for sale. It’s that chain of buyers’ moving up from older to new homes, and replenishing the stock of those older, cheaper homes that middle-class buyers can choose from, that holds prices in check.

For that process to work, it’s crucial that a large portion of the new construction come in the lower and middle price ranges. As Mark Boud, chief economist at Metrostudy, a leading provider of market data and analysis in housing, put it, “In short, as new home supply increases, price increases should moderate or slow. It will be very difficult to bring on enough new home supply in the lower price ranges, but that is what is needed to slow price appreciation.”

Metrostudy provided Fortune with statistics on median prices and new construction in two Sunbelt and two coastal markets that illustrate how a strong flow of new homes––even when employment growth is robust––keeps housing affordable, while a chronic shortages of new-builds makes prices both extremely high, and highly volatile.

The bargain cities are Atlanta and Raleigh, the ultra-pricey locales L.A. and Seattle. It’s important to note that when the numbers start in Q1 of 2008, near the top of the bubble, median prices in L.A. at $505,000 and Seattle at $366,000 were already a lot higher than in Atlanta ($175,000) and Raleigh ($214,000). Even in that peak period, Atlanta was building four times as many homes as the much bigger L.A.-Long Beach-Anaheim metro, and three times the volumes in Seattle-Tacoma-Bellevue.

Relatively tiny Raleigh was turning out more houses than either of the coastal giants. As those numbers show, it was a dearth of fresh construction, over many years, that exerted immense pressure on the only game in town, the aging stock of existing homes, causing ultra-high prices in L.A. and Seattle.

From early 2008 to low points ranging from 2009 to 2012, prices in all four markets fell sharply––but the declines on the Gridlocked Coasts were more pronounced. Values toppled by 29% in Seattle and 31% in Los Angeles, versus 21% in Atlanta and an extraordinarily minuscule 5.4% in Raleigh. That’s because construction held up a lot better in the Bargain Belt. For example, in Q4 of 2011, L.A. was erecting just 663 houses, 40% fewer than in Raleigh. It’s clear that healthier rates of new construction blunted the declines during the financial crisis in the Bargain Belt, and sharpened volatility in the Gridlocked Coasts.

The divergent fortunes of the coastal and sunbelt markets over the past four years shows how decisively new construction governs prices. From the start of 2015 through Q1 of this year, the work force in Raleigh grew fastest at 12.7%, followed by Seattle at 12%, Atlanta at 7.6% and L.A. at 7.6%. Even though the ranks of folks earning paychecks, and hence the pool of potential home-buyers, rose 58% faster in Raleigh than in L.A., prices in the City of Angels rose 23% over those four-plus years, the same rate as in Raleigh despite the latter’s big influx of workers. Seattle grew at the same 12% pace as Raleigh, but prices jumped almost twice as fast, by 39% versus 21%. Atlanta’s workforce rose a bit more slowly than Seattle’s but its prices rose 16 points less, 23% versus 39%.

What restrained prices in Raleigh and Atlanta and fueled outsized increases relative to job growth in Seattle and L.A.? You guessed it: The yawning gulf in the amount of new construction. Seattle has a workforce of 2.1 million, but in Q1 of this year, it was building 2,492 homes, 331 fewer than Raleigh with an employee base one-third the size at 683,000. L.A. is now erecting 1,809 single family houses, two-thirds as many as Raleigh and one-third the number in Atlanta, even though its workforce of 6.2 million is almost ten-times Raleigh’s and more than twice Atlanta’s.

By now, you’re probably getting dazed by statistics. But I can’t resist leaving you with this beauty. Little giant Raleigh is now building one house for every 278 members of its workforce. Atlanta trails, but is also doing well, posting a worker to new house ratio of 457. In Seattle, one house rises for every 843 workers. And Los Angeles, a pacesetter in everything from green energy to high-speed rail to avant-garde architecture, is the superstar in suppressing new housing. One single-family home is now being built for every 3,427 resident with a job, one-seventh as many as in Atlanta and one-twelfth the number per worker as in Raleigh.

That’s not surprising. The L.A.-Long Beach-Anaheim markets make it so costly to get new building lots approved that the little new private-sector construction that exists is mostly aimed at multi-millionaires. If a city’s rules and regulations encourage new construction, the market will work by providing an ample supply of affordable single-family housing. For proof, look at abundance in the Bargain Belt, and the man-made scarcity on the Gridlocked Coasts.