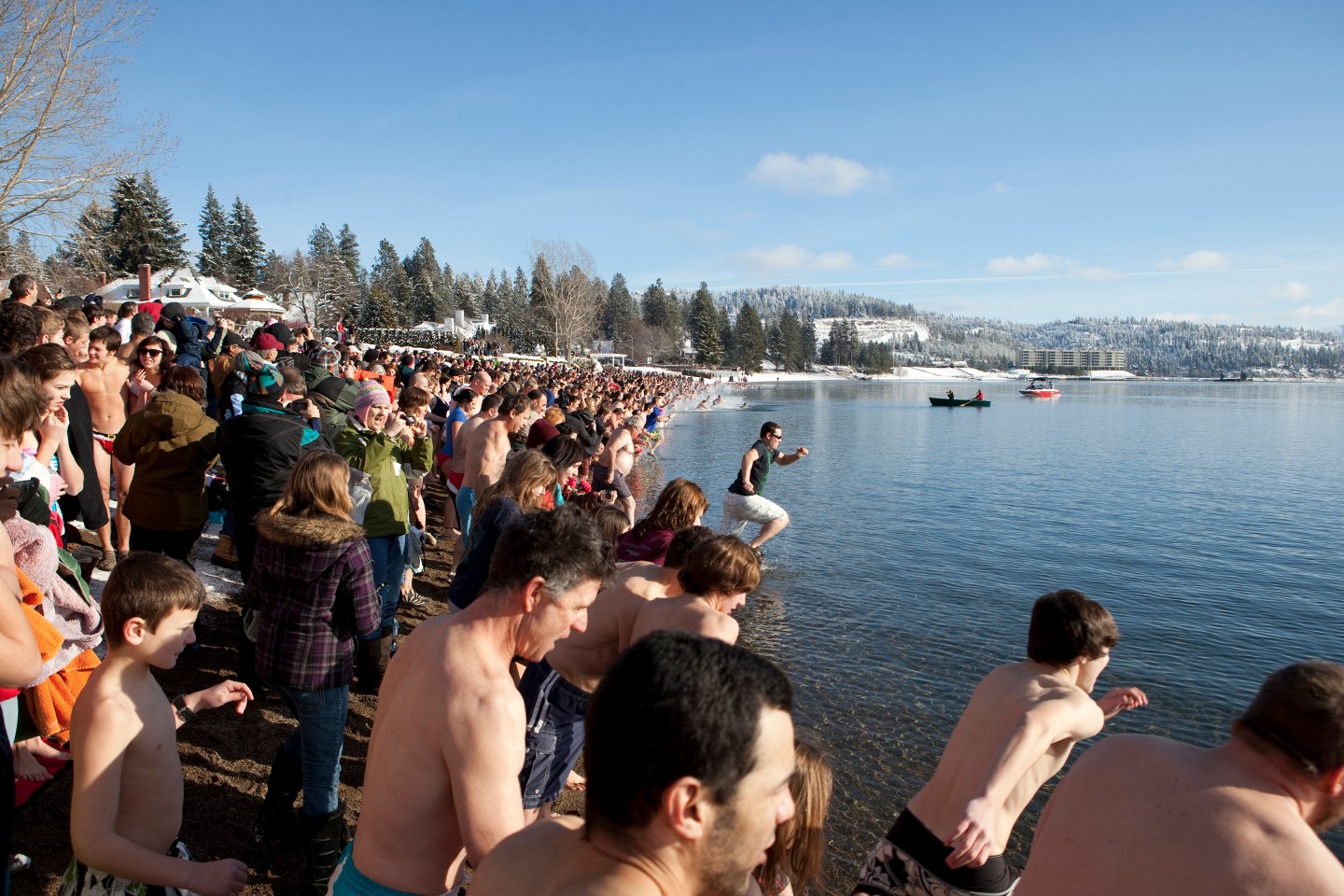 As you prepare to enjoy the uniquely American holiday, we’re re-running a column which offers a deep dive into the modern American character via extended road trip. Enjoy.

In this insightful and remarkably funny TED talk, writer Rich Benjamin shares the insights he gained about the American character from his two and a half year investigation of “Whitopias” – rapidly growing white communities that are brimming with affability, order, low-key charm.

It’s an interesting spin on flight. Benjamin defines a Whitopia as a place that has seen a six percent population gain since but only from primarily white migrants. “And third,” he says, “the Whitopia has an ineffable charm, a pleasant look feel, a ‘je ne sais quoi.’”

He traveled around the country examining the attributes of these communities, but he lived for an extended period in three: St. George, Utah; Coeur d’Alene, Idaho; and Forsyth County, Georgia.

As a black man, he stood out while he tried to blend in and he approached his adventure as if he were a sweetly bemused anthropologist, intrigued by the behaviors around him. He asked local people to help him learn their passions for fishing, golfing, target shooting and poker, and he went all in as a mega-church member. He even crashed a weekend conference of Aryan Nations members! They were…surprised to have him but it went okay!

By the time you get used to his Whitopia-ish delivery, he brings the goods:

But what does it all mean? Whitopian dreaming, Whitopia migration, is a push-pull phenomenon, full of alarming pushes and alluring pulls, and Whitopia operates at the level of conscious and unconscious bias. It’s possible for people to be in Whitopia not for racist reasons, though it has racist outcomes. Many Whitopians feel pushed by illegals, social welfare abuse, minorities, density, crowded schools. Many Whitopians feel pulled by merit, freedom, the allure of privatism — privatized places, privatized people, privatized things. And I learned in Whitopia how a country can have racism without racists.

Listening to him from 2015, it’s easier to see the foundations of the political division yet to come, and the underlying reason why immigration is one of the key triggers for people who have come to embrace the Whitopian promise.

“[M]ost white people in Whitopia are neither white supremacists or white separatists; in fact, they’re not there for explicitly racial reasons at all. Rather, they emigrate there for friendliness, comfort, security, safety –reasons that they implicitly associate to whiteness in itself.”

Nike cancels plan for a Betsy Ross flag-themed sneaker after Colin Kaepernick and others raise concerns
According to sources familiar with the matter and The Wall Street Journal, the special Air Max 1 USA was created for the July Fourth holiday, but was abruptly removed from shelves after the apparel giant learned that it referenced the colonial-era flag, which symbolizes white supremacy to some. While Kaepernick himself has not commented, the flag has been banned from at least one school district in the past, and the NAACP has warned that the thirteen star flag also been co-opted by white supremacist groups. Arizona Governor Doug Ducey took to Twitter to express his displeasure. “I’ve ordered the Arizona Commerce Authority to withdraw all financial incentive dollars under their discretion that the State was providing for the company to locate here,” he said referring to Nike’s decision to open a manufacturing facility in Goodyear, Ariz. The plant promised 505 full-time jobs. Wall Street Journal

Nivea loses its advertising agency over allegations of homophobic speech
Interpublic's FCB agency is dropping Nivea’s account after an executive allegedly said, “we don’t do gay at Nivea,” during a call about a creative campaign. Among the people on the call was a gay FCB executive. FCB is a massive network of agencies; according to the company, some configuration of their affiliated shops have worked on the Nivea brand for 100 years. "There comes a point in every longterm relationship when you reflect on what you've accomplished together and set your sails for where your journey will take you next," says FCB Global CEO Carter Murray in his kiss-off memo. "Sometimes that journey ahead demands tough choices that lead down different paths." Click through for the image that turned off Nivea, and to read the entire memo which ended the relationship. Ad Age

Inside a secret Facebook group where border patrol agents joked about migrant deaths, made racist and misogynist comments
This investigation from ProPublica comes at a time when law enforcement in many arenas are under fire for inappropriate behavior in online forums. Now, that conditions at the border are so alarming, the comments are particularly upsetting. The postings are often juvenile in nature — after a 16-year-old Guatemalan migrant died in custody, a member posted a picture of Elmo with the caption, “Oh well.” Others are far worse. And when members of the Congressional Hispanic Caucus arrived to inspect facilities, things became particularly vile. One post included a photoshopped image of Rep. Alexandria Ocasio-Cortez performing oral sex on the president. The group was created in 2016 and has more than 9,500 members. ProPublica

High school journalist discovers that his school used prison labor for remodeling work
It’s an interesting story. Spencer Cliche, who just turned 18, was one of many journalism students from the Amherst-Pelham Regional High School in Massachusetts who were inspired by a school screening of the film Spotlight, about The Boston Globe’s investigation of a sex abuse scandal in the Roman Catholic Church. On the hunt for his own scoop, he followed up on a rumor that the school had contracted with a firm that used incarcerated people to reupholster the seats in their auditorium. They paid just pennies for the labor. He confirmed the rumor. While it turns out the work is controversial, it is meaningful to many incarcerated people, so his story was more nuanced than he first expected. “The dilemma is that the system is profoundly broken with extremely low pay and few safety protections,” said one of his adult advisers. Then the real twist: The young journalist discovered that the school opted not to use a different firm for the work, one that employed formerly incarcerated people but paid a competitive wage. New York Times

What does it mean to be Wasichu?
I first heard the term on one of my visits to the Pine Ridge Reservation in South Dakota, which is one of the poorest parts of the country. "Wasichu" is the Lakota term for non-Indian white person, but it also means "the one who takes the best meat for himself." This painful history of colonial aggression, greed, violence, and treaties made and broken is the subject of this TEDx talk delivered by Aaron Huey, a Wasichu photographer who has spent much of his career documenting poverty in the U.S. and ultimately within the Lakota-Sioux community of Pine Ridge. The reservation, he says, “is sometimes referred to as Prisoner of War Camp Number 334,” a nod to the 1871 Indian Appropriation Act that made all Indians wards of the federal government. And current conditions reflect that: Unemployment hovers at 90%, and average life expectancy doesn’t hit 50. TED

Paris, France has become the new center of queer-ballroom culture
It's a title which was once held by New York City and memorialized by the magnificent documentary Paris is Burning, now 30 years old. Both underground scenes feature mostly black and Latinx members of the L.G.B.T.Q., according to this wonderful dispatch from The New York Times, and there are dance competitions and drama and spectacular showpersonship. (Only one can legitimately claim to be the birthplace of voguing, however.) But the ballroom scene is part of an important tradition of resistance and inclusion for people of color in what was way back in the day a largely white counterculture movement. Come for the history, stay for the icons. New York Times

All the racist bones
When people of color attempt to correct people of no color when their commentary wades into territory that references, even unwittingly, racist ideas, it is customary for others to defend them thusly: “But, [this person] doesn’t have a racist bone in their body!” This must end, says The Root’s Michael Herriot. “Recent advances in prejudice technology have finally given scientists the ability to identify the racism bone, revealing that many of the previously accepted self-diagnoses may not be medically sound,” he says in this important essay. While Herriot may be living with tongue-in-cheek syndrome, the disease he describes sounds dire. “Congenital Osteowypiposis is a communicable disease that affects nearly 53 percent of white women and more than 62 percent of white males,” he says. It spreads to the brain quickly and “results in severe delusion, the desire to say the n-word in retail stores, chronic apathy and an allergic reaction to people with melanin in their skin.” The Root

"Lift every voice and sing / Till earth and heaven ring / Ring with the harmonies of Liberty; / let our rejoicing rise, / high as the list'ning skies, let it resound loud as the rolling sea / sing a song full of faith that the dark past has taught us, / sing a song full of the hope that the present has brought us; / facing the rising sun of our new day begun, / let us march on till victory is won.