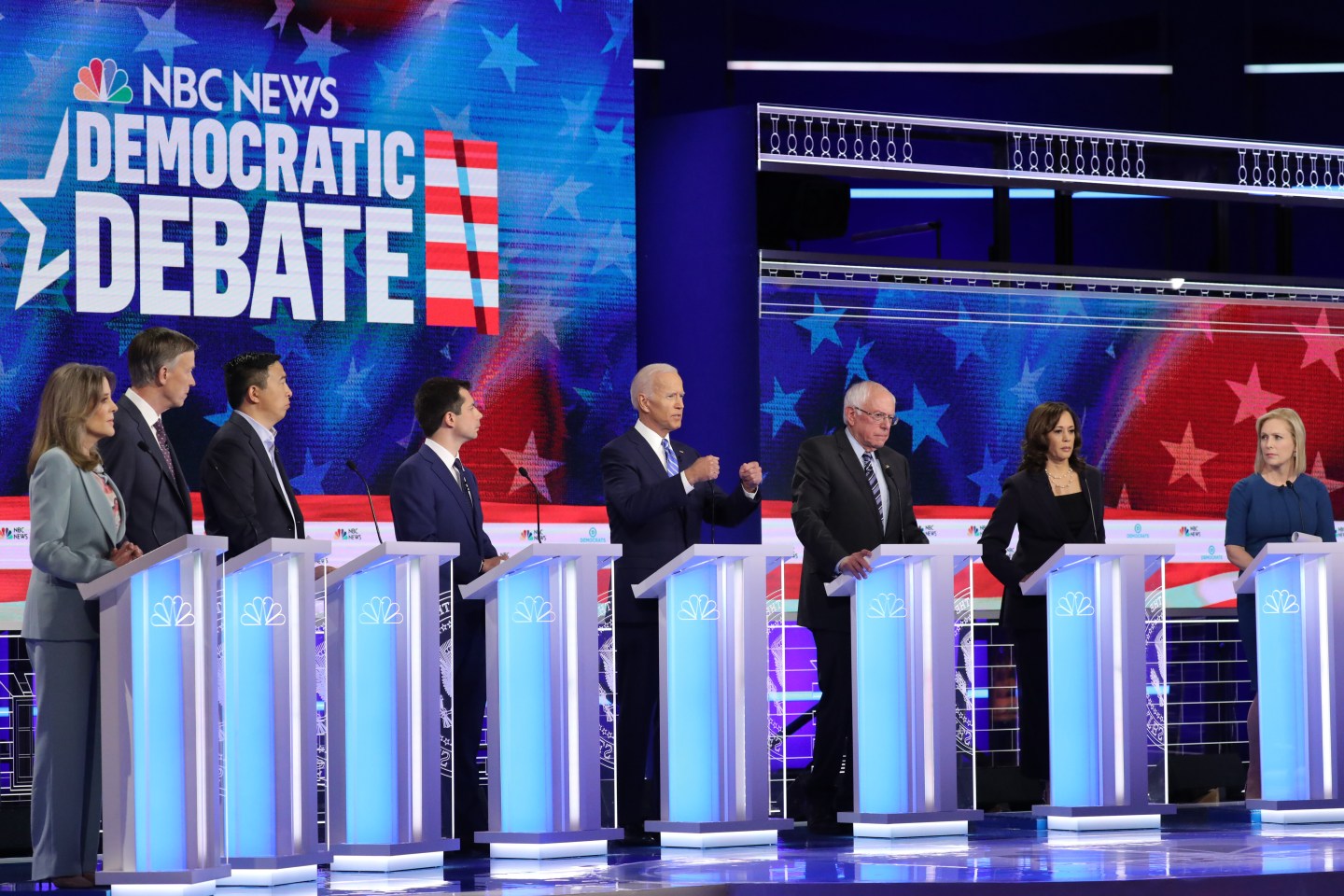 Weeks ago, the Democratic National Committee refused a request to hold a debate solely focused on one of the most important issues to be discussed in the 2020 election: climate change.

After the two nights of debate in Miami, Fla., included less than 20 minutes of discussion on the topic and public pressure, a DNC official told Fortune its executive leadership will consider two resolutions to hold either a forum or full debate on climate change with the presidential candidates.

“We need a damn climate debate,” Varshini Prakash, executive director of the youth-led climate activist group Sunrise Movement, said, as the group held a three-day sit-in outside of the DNC’s Washington, D.C., headquarters.

DNC officials have refused to meet with any of the group’s members but the same official confirmed to Fortune the two resolutions were introduced at a meeting of the executive leadership in Pittsburgh, Penn., last Friday, after the first two nights of debate. Leadership agreed to refer the items to its resolutions committee for consideration at a meeting in San Francisco on August 23.

According to Sunrise Movement, a vote will be taking place at that meeting but the DNC could not confirm whether that was guaranteed. Still, there does seem to be some hope for activists who have been enumerating the reasons to hold an issue-specific debate.

Executive Director of 314 Action, a “pro-science advocacy group” which pushes to elect scientists to public office, Josh Morrow told Fortune after the first night of debate: “climate change is the single biggest issue facing humanity and it got barely seven minutes of airtime with only five candidates answering.”

Approximately seven to nine minutes was spent on climate change during each night despite the costs of hurricanes in the last few years skyrocketing into the hundreds of billions of dollars in the U.S. alone, the Pentagon pointing to coastal erosion and drought as national security threats, and thousands of teenagers going on school strikes to call for political action.

Prakash said before the decision to hold a vote that “officials from the DNC refused even to meet with young people demanding a debate to focus public attention on the climate crisis,” despite dozens of people from the organization sleeping outside for days.

Washington state Governor Jay Inslee led the charge on the first night, as expected since he has largely based his campaign championing the Green New Deal and looping the issue of jobs. Senator Elizabeth Warren also tied in the economy, commenting about the potential of a $23 trillion market for green energy products and 1.2 million jobs.

While former Texas Congressman Beto O’Rourke discussed carbon capture and storage, a procedure in which carbon emissions are stored in the ground, moderators failed to press him on how several climate scientists and advocates have railed against it since it does not discourage oil and gas companies from actually curtailing emissions.

Moderators also appeared to think South Bend, Ind., Mayor Pete Buttigieg was veering away from climate change when he mentioned “local and state” actions, but much of the environmental regulation and climate action has taken place by the 1,000 or so mayors, governors, and CEOs who pledged to do so in light of the Trump administration starting the withdrawal process from the Paris Agreement.

Former Housing and Urban Development Secretary Julián Castro was the only candidate on either night to mention Puerto Rico. The U.S. island territory was devastated in 2017 by Hurricane Maria and waited nearly 18 months for extended federal disaster relief. While Senator Kamala Harris addressed climate change on the second night of the debate, she made a pivot away to a larger agenda and left those wanting to know about her plan without a clear picture of it.

Inslee’s campaign told Fortune that none of it was enough.

“We will not defeat the climate crisis with 60 second sound bites,” the governor said.   “We need ambitious plans and a real agenda. And we need questions that delve into the tough questions.”

“Democratic Party leadership said there shouldn’t have a climate debate because climate change is just a ‘single issue,'” Prakash pointed out. “Try telling that to the 1,000 workers in Philadelphia who lost their jobs today because one of the biggest oil refineries in the country exploded.”

It is a point several advocates have highlighted: the wide-ranging effects of climate change include public health, jobs, Wall Street (as it evaluates the viability of divestment from the fossil fuel industry), military bases, conflict around the world (as competition for natural resources increases), and geopolitics (as the U.S. continues to ignore the Paris Agreement on climate change signed by nearly 200 countries in 2015—and countries vie for territory in the melting Arctic circle).

The lack of attention paid to climate change is obviously not something new. In all of the 2016 debates combined, only 1.5% of questions were devoted to it.

But as Prakash noted, her generation has no time to waste not having candidates openly and fully discuss their plans to combat what she called an “existential threat…to every aspect of our lives, from housing to healthcare to the economy,” adding that “business as usual is a death sentence for my generation.”

While DNC chair Tom Perez came under fire for his comments in a Medium post in which he wrote though “Climate change is an urgent threat to our nation and our planet” the DNC felt it would be “unfair and unrealistic to ask the candidates” to debate on the requests for 50 or so issue-based debates.

Washington state Democratic Party Chairwoman Tina Podlodowski said back in June: “I think whoever the next American president should be [and] needs to be able to talk about these issues and show the breadth of what Democrats are doing around us.”

The hesitation on Perez and executive leadership’s part could be a concern that other issue-specific debates will be requested from everything on trade, gun control, reproductive health, or immigration. One sign in favor of the climate debate: the DNC official said it was unanimously referred for consideration. Christine Pelosi, a DNC Executive Committee member, tweeted “We need a survival plan in contrast to the polluter in chief. I moved for a #ClimateDebate…See you in San Francisco (sic)”

Some have argued perhaps cost was an additional concern on top of logistics and pure politics. 314 Action decided to take care of that with a pledge of $100,000 to hold a full climate-focused debate in case cost was considered a hurdle large for the DNC or other groups to shy away from a full debate.

Morrow said he hopes the “party leaders, state chairs, climate scientists and activists” his group has been in touch with will take them up on the offer to foot the bill. If the DNC does not vote to pass either of the resolutions, all hope for a climate-focused debate may not be lost. Morrow noted the “15 candidates who have already indicated they’d participate in a debate on climate change can come to us so we can organize the debate independently.”