She’s 31, a Ship’s Captain, and She Just Torpedoed Italy’s Relationship With EU Partners 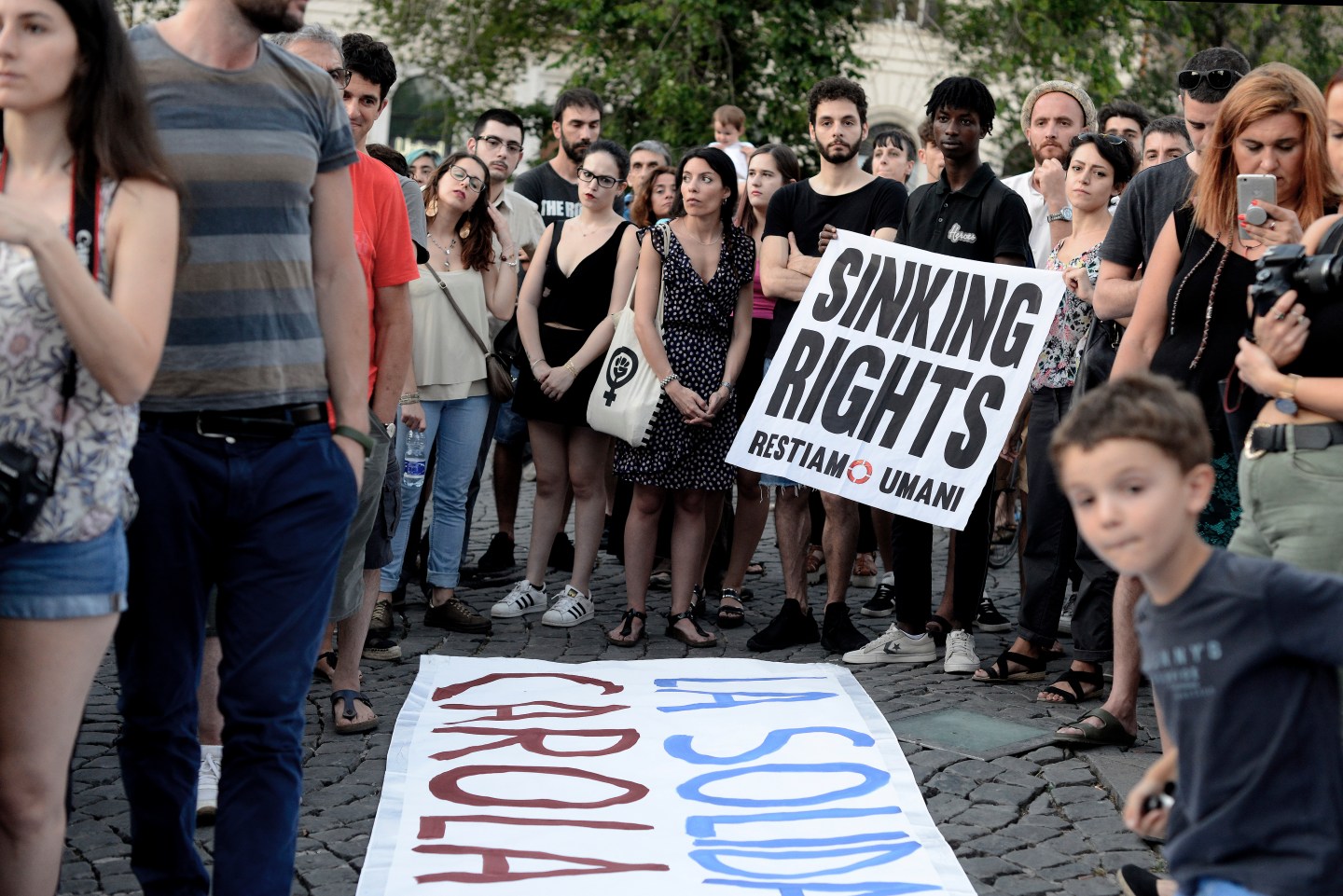 Europe’s migrant crisis has a fresh new face: a 31-year-old German ship captain who was arrested over the weekend for defying Italy’s zero-tolerance “closed ports” policy.

With a cascade of boos pouring down from onlookers, the dreadlocked Carola Rakete, captain of the aid boat Sea Watch 3, was taken into custody by armed Italian officers at a port on the tiny Mediterranean island of Lampedusa. Rakete faces a fine of 50,000 euros and possible jail time for bringing 40 ailing migrants, stranded at sea for much of June, to shore.

The timing of Italy’s arrest of the young German, captaining a Dutch-flagged ship, couldn’t have come at a more fraught moment for Italy and the European Union. In the hours before her arrest, the European Commission had tried to broker a deal to avoid a diplomatic row, proposing that the migrants be distributed between five European countries. That olive branch failed to diffuse the showdown at the port, however.

At the G20 Summit in Japan, Italian Prime Minister Giuseppe Conte scrambled to address the matter in the hours after her arrest, but his comments did little to lower the geopolitical tensions back home. Hours later, Germany expressed its indignation with the arrest of one of its own. Foreign Minister Heiko Maas was particularly critical of Italy’s heavy-handed approach. “It’s a humanitarian duty to save lives,” he wrote on Twitter. “It is on the Italian judiciary to swiftly clarify the accusations.”

For weeks, the Sea Watch saga has played out daily on social media, in the press and even in the halls of the Vatican where Pope Francis weighed in to defend the aid group. The latest episode risks further dividing the bloc down a Left-Right fault line, pitting civil society groups, clearly in the corner of Rakete, against hardliners such as Salvini who’s staked his rise to power on cracking down on mass migration reaching Italian shores.

Salvini also couldn’t have been all that pleased with the outcome. The ordeal in Lampedusa occurred as European leaders met in Brussels over the weekend in an intense fit of horse-trading to secure the bloc’s top positions, including a successor to European Central Bank President Mario Draghi. That, and the presidencies of the European Commission, Parliament, Council are all up for grabs. Traditionally, member states put aside their differences during these negotiations, trading favors and striking alliances to get their preferred candidate the plumb assignments.

And Italy, more than ever, could use some friends in Brussels. The country has run afoul of European Union budget rules, and is facing a possible 3.5 billion euro fine plus demands to introduce more austere spending measures. Salvini, meanwhile, has repeatedly urged Brussels to back off as he hopes to deliver tax cuts to Italian businesses and taxpayers. This impasse over Italy’s budget has raged for much of the past year, at times roiling global stock markets and sending the so-called “risk spread” between Italian and German bonds soaring.

On Monday morning, the spread was little moved, but that’s mainly because the markets believe another Italian – ECB president Draghi – is poised to cut rates and re-introduce a new tranche of bond-buying in his remaining months, two moves that would serve as a lifeline to Salvini and his governing coalition partners in Rome.