The Bahrain Conference: What the Experts and the Media Missed 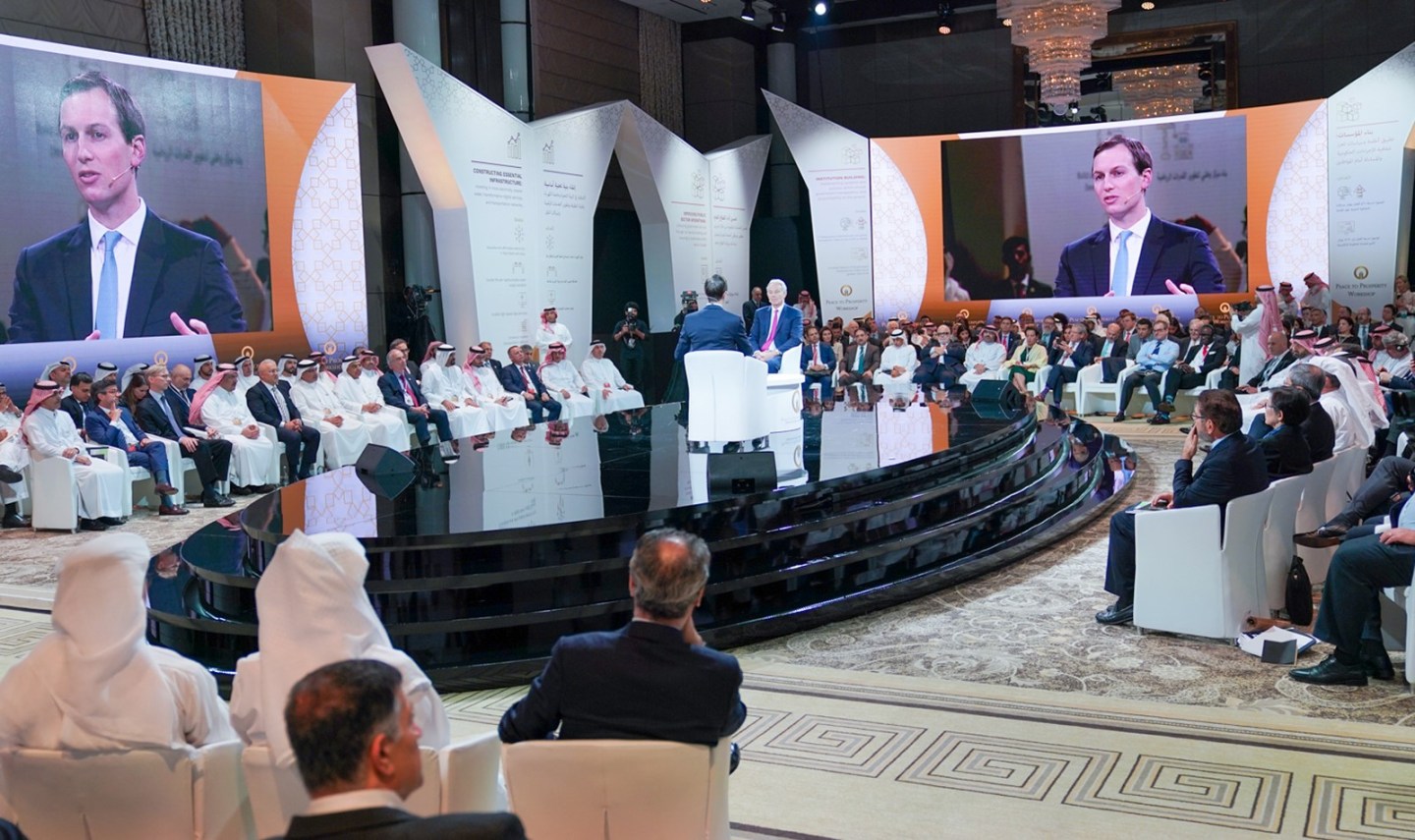 Amid the constant recycling of commentary about the recent Democratic Party candidate debates, you might have thought the world was riveted only by this intra-family food fight. If you didn’t read or hear anything about last week’s Bahrain economic summit, you are not alone.

But while U.S. media largely ignored this event, the global media saw something remarkable and historic unfold. The summit, organized by the U.S. government and hosted by Bahrain’s crown prince, showcased different voices with new ideas and the economic resources to bring to life dreams of progress in Palestine.

Over 300 top delegates came from 30 countries, from Australia and Argentina; Dubai and Delhi; Nigeria and Norway; and even such unlikely pairings as Saudi Arabia and Qatar or Greece and Turkey. The explicit purpose was to reverse the sequence of the past 50 years of peace efforts (e.g. Oslo, Paris, Annapolis) – that is, to share an economic vision before delving into divisive political real estate battles. (I served as a volunteer moderator at one panel during the summit.)

White House Senior Advisor Jared Kushner unveiled a $50 billion economic plan, one whose implementation would be predicated on a future political peace agreement. His plan gives the opposing parties a chance to visualize what the quality of life could be like when tensions subside. Drawing on the remarkable economic-development successes in other countries that have been torn by past political violence, including Bangladesh and South Korea, the proposal details highly specific uses of grants, low-interest loans, and private investment intended to double the size of the Palestinian economy, create one million new jobs, reduce Palestinian unemployment from 30% to single digits, and reduce Palestinian poverty by 50%.

Roughly 190 specific projects in the Bahrain plan would aim to increase export revenue from 17% to 40% of Palestinian GDP; ensure reliable electricity; double the drinkable water supply; connect more schools to high-speed data services; increase women’s participation in the work force; and generate a 500% increase in foreign direct investment. The plan would boost investment in key industries such as tourism, agriculture, digital services, housing, and manufacturing; it would also provide for infrastructure enhancements such as a $5 billion high-speed highway connecting Gaza to the West Bank. While many of these projects echo goals of earlier development plans from the World Bank and other organizations, this is the first plan that aims to comprehensively integrate these efforts—and to adequately fund them.

U.S. business leaders, including Blackstone Group CEO Stephen Schwarzman and AT&T CEO Randall Stephenson, were present to give these plans their endorsement. They and dozens of other executives cited the proposals as attractive investment opportunities, with very reasonable financial targets, in an environment where the rule of law could help them thrive.

A hush fell over the Four Seasons banquet hall in Manama during Wednesday’s closing panel, led by U.S. Treasury Secretary Steven Mnuchin. Top officials, diplomats and business leaders, including the host, Crown Prince Salman bin Hamad Al Khalifa, watched approvingly as foreign affairs and finance ministers from the Gulf Coast countries joined Bahraini Foreign Minister Khalid bin Ahmed Al Khalifa on stage. The minister proclaimed: “Israel is a country in the region and it is there to stay, of course. As much as Camp David was a major game-changer…if this succeeds, and we build on it, and it attracts attention and momentum, this would be the second game-changer.”

Much media coverage focused on who was not present in Bahrain. The Palestinian Authority called for a boycott of the conference. Hamas, which effectively rules the Gaza Strip, condemned it. And due to Israeli political turmoil, the administration of Prime Minister Benjamin Netanyahu did not send a delegation. But if anything, this event demonstrated that “absence makes the heart grow fonder.” In the absence of Palestinian and Israeli politicians who have been frustrating each other for decades, and with no risk of the event being packaged as a campaign rally for Netanyahu, who faces upcoming elections, dialogue and comity could grow.

To cynics, the absences provided ammunition to condemn the conference. Opponents allied with both the Palestinians and Israeli sides have argued that diplomatic agreements must precede economic ones. More specifically, many oppose the Bahrain approach because it doesn’t provide for a so-called two-state solution that creates a sovereign Palestinian nation.

Jared Kushner addressed this mindset in his opening comments on Wednesday, saying, “Enough of the old broken record” of handwringing over how things cannot change. Schwarzman told the attendees that “it is important to think big and to have a dream.”

As a discussion facilitator, I attended virtually every second of the formal and informal elements of this event. I did not hear even passing anti-Zionist comments, as much as I would have expected them in an atmosphere where Israel’s historic critics outnumbered its allies. Instead, Arab leaders echoed comments like Kushner’s and Schwarzman’s. Negotiation experts talk of the importance of separating the emotions of people from the positions they take, and then separating divisive positions from issues where there may be common ground. The Bahrain summit seemed to accomplish that, and spirits soared over what was said and who said it.

Over many centuries, relations between Jews and Palestinians have fluctuated between long periods of violent conflict and peaceful coexistence. At this conference, prominent Palestinian business leader Ashraf Jabari, who heads a large clan in Hebron on the West Bank, explained how he has advanced bonds with Jewish settlers—even creating a business association for Palestinian and settlement businesses to work collaboratively. As he said on Wednesday, “I have no problem working with Israel. It is time to move on.” Smiling and nodding as he spoke were not only a dozen fellow Palestinian leaders but also the dozen Israeli business leaders present, including shipping magnate Shlomi Fogel.

Despite the well air-conditioned ballroom, Jabari’s brow glistened with sweat as he addressed the group. I went to shake his hand after he spoke and he gave me a bear hug. Since then, I’ve learned what he put at risk by being there and speaking out. Sadly, another member of the Palestinian delegation was arrested by the Palestinian Authority at a family event upon returning home; other delegation members saw their homes raided. “The Palestinian Authority does not want peace. They told the families of the businessmen that they are wanted for participating in the Bahrain workshop,” Jabari told the Jerusalem Post,adding that the workshop was “a big success and that’s why [PA President Mahmoud] Abbas is very worried.”

The Bahrain summit’s projection of a spirit of hope, from Palestinian and Israeli business leaders and their peers around the globe, provides a welcome response to the growing dismay among younger people in the region—and a counter to growing cynicism about the failures of Israeliand Palestinian political leadership. Weary of decades of violence, younger people are demanding change and are open to direct appeal from their Arab neighbors. The plans discussed in Bahrain offer younger people a path to become relevant and effective.

That’s especially true of the Palestinians, whose communal identity has been trapped for too long in the default position of “refugee.” A senior Saudi diplomat recently said Palestinian should stop thinking of themselves as victims, the better to empower themselves.

Mohamed Allabar of the United Arab Emirates, founder of Emmar Properties and one of the world’s biggest commercial builders, told the conference, “The younger generation will not let us continue trapped by our past. Palestinian people are our people. We get up every morning positive, and we want to do more…By generating jobs, income opportunities and filling gaps in delivering basic services, the private sector can help build momentum behind a fragile economy and instill hope in the people of the region.”

Conflict management experts, including Kurt Lewin and Herbert Kelman, have cautioned that the diversionary details of plan execution are less valuable than a shared vision of how life could be after a transformation. Before a political solution can be sold, all parties have to imagine a highly desirable scenario far better than the status quo.

Perhaps unschooled in this research, the New York Times in an editorial on Fridaydismissed the Bahrain initiative as “big-dream plans divorced from reality,” echoing the historically unfounded cliché that diplomatic solutions must precede economic plans. What the Times overlooks is the failed history of “political solution first,” which so far has usually meant there will be no solution. There are myriad self-interested advocacy groups, international bodies, and politicians, unfortunately, who read from the same script.

People who witnessed the spirit of Bahrain feel otherwise. As former Obama administration Mideast peace envoy David Makovsky said to me at the event, “My hope is that after Bahrain…we’re not just saying we’ve put forth a compelling vision of an endgame, but we’re starting down that road to make it more tangible in the short term. Israeli-Arab cooperation has been going on for years under the table, but the table seems to be levitating, because it’s very crowded under there.”

It was under that levitating table that Palestinian business leaders joined with Arab leaders from around the Gulf Coast, along with Israeli, African, European and American sponsors. The self-interest of these leaders has been put on alert as confusion in the region gives way to pragmatism. Let’s hope leaders embrace the opportunities for regional vitality with economic resources and investments across the boundaries of religions and ethnicities.

Jeffrey Sonnenfeld is Senior Associate Dean and Lester Crown Professor of Management Practice at the Yale School of Management. He served as a moderator of the Bahrain “Peace to Prosperity” economic summit.