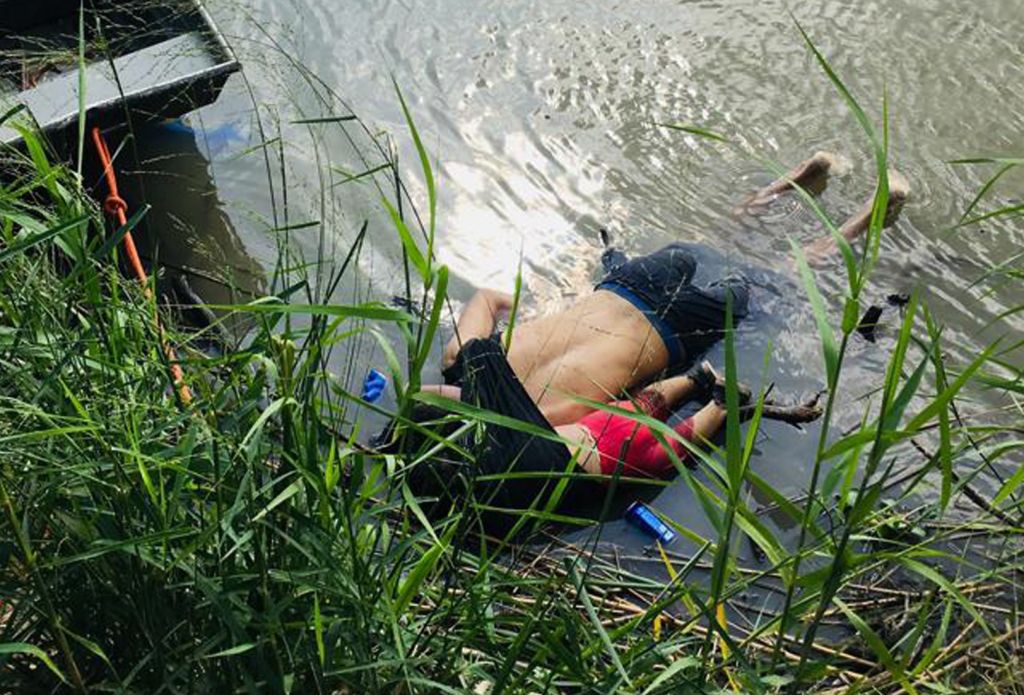 View of the bodies of Salvadoran migrant Oscar Martinez Ramirez and his daughter, who drowned while trying to cross the Rio Grande in Matamoros, state of Coahuila on June 24, 2019. (Photo by STR / AFP) (Photo credit should read STR/AFP/Getty Images)
STR AFP/Getty Images

From the Vatican to the U.S. Congress and campaign trail, expressions of anguish, empathy and outrage poured out Wednesday over the photos of a migrant father and young daughter who drowned while trying to cross the Rio Grande from Mexico to enter the United States without legal permission.

The photos show the bodies of the man and his 23-month-old daughter lying face down near the river bank. Her arm was draped around his neck, suggesting she clung to her father in their final moments. The photos published by the Mexican newspaper La Jornada were distributed worldwide by The Associated Press.

Oscar Alberto Martinez Ramirez and daughter Valeria were fleeing from El Salvador, which is wracked by violent crime. The mother, Tania Vanessa Avalos, was still on the Mexican side of the river and survived.

Some of the reaction:

Pope Francis saw the photos and was deeply saddened, a Vatican spokesman said.

“With immense sadness, the Holy Father has seen the images of the father and his baby daughter who drowned in the Rio Grande River while trying to cross the border between Mexico and the United States,” said the Vatican’s interim spokesman, Alessandro Gisotti.

“The pope is profoundly saddened by their death, and is praying for them and for all migrants who have lost their lives while seeking to flee war and misery,” Gisotti’s statement added.

Francis has frequently been vocal in his support of Mexico’s efforts to help migrants and critical of the U.S. for blocking them at the border. During a visit to the U.S.-Mexico border in 2016, he criticized then-presidential candidate Donald Trump, suggesting that anyone who wanted to build a wall along the border was “not a Christian.”

In April, the pontiff donated $500,000 to help migrants in Mexico, offering assistance to local projects that provide food, lodging and basic necessities.

Congress’ top Democrats said they hoped the photos would challenge the Trump administration’s conscience while pressuring the president to ease his efforts to make it harder for people to enter the U.S. A top Republican said the photos should stir Congress to address the crisis on the border.

“This isn’t who we are as a country. We have obligations to humanity that are being completely ignored,” House Speaker Nancy Pelosi, D-Calif., told The Associated Press in a brief interview. “This is a manifestation of behavior that is outside the circle of civilized human behavior.”

Senate Minority Leader Chuck Schumer suggested that Martinez and his daughter might not have died had Trump agreed to Democratic efforts to help migrants fleeing Central American countries to enter the U.S. as refugees.

“How could President Trump look at this picture and not understand that these are human beings fleeing violence and persecution, willing to risk a perilous, sometimes failed journey in search of a better life,” Schumer, D-N.Y., said on the Senate floor.

He added, “If our ports of entry were adequately staffed, we had enough asylum judges and our asylum laws respected, they might not have perished.”

Republican Sen. Ron Johnson of Wisconsin, the chairman of the Homeland Security Committee, opened a hearing Wednesday saying the photo should propel Congress to act.

“I don’t want to see another picture like that on the U.S. border,” Johnson said.

“I hope that picture alone will catalyze this Congress, this Senate, this committee to do something,” Johnson said. “It is well past time. And that picture that all Americans woke up this morning looking at, again should be used as a catalyst for that kind of action.”

The congressional leaders spoke as the photographs rocketed around the internet and were used by news organizations usually hesitant to publish pictures of dead bodies.

They immediately caught the attention of a Congress trying to approve billions of dollars in humanitarian aid for the migrants streaming across the southern U.S. border.

Asked if the photos could alter the immigration debate, Pelosi said, “I would hope so, but we’ve had many challenges to conscience which haven’t. But let’s hope that this just tips the scale.”

The photos also spurred many of the Democratic presidential candidates to criticize U.S. immigration policy.

“Trump is responsible for these deaths,” former Texas Rep. Beto O’Rourke said in a tweet that included a link to the photo.

Pete Buttigieg, the mayor of South Bend, Indiana, said the country needs to summon the political will to fix the immigration system. “If you can look at a picture like that and say that it is acceptable to continue doing what we’ve been doing, then I just don’t understand,” he said on MSNBC.

Sen. Bernie Sanders of Vermont said on Facebook: “This is horrific. Trump’s policy of making it harder and harder to seek asylum_and separating families who do_is cruel, inhumane and leads to tragedies like this. We must stop the deaths. We must restore humanity to our immigration system.”

“People see that photo and they might wonder, ‘What can I do about that?’ What you can do about it is push as hard as you can so that the Unites States government changes this policy of metering,” Castro said in Miami, the sight of the first Democratic debates. “This administration is culpable.”