The GOP Doesn’t Want Roy Moore to Run for Senate. But He’s Doing It Anyway 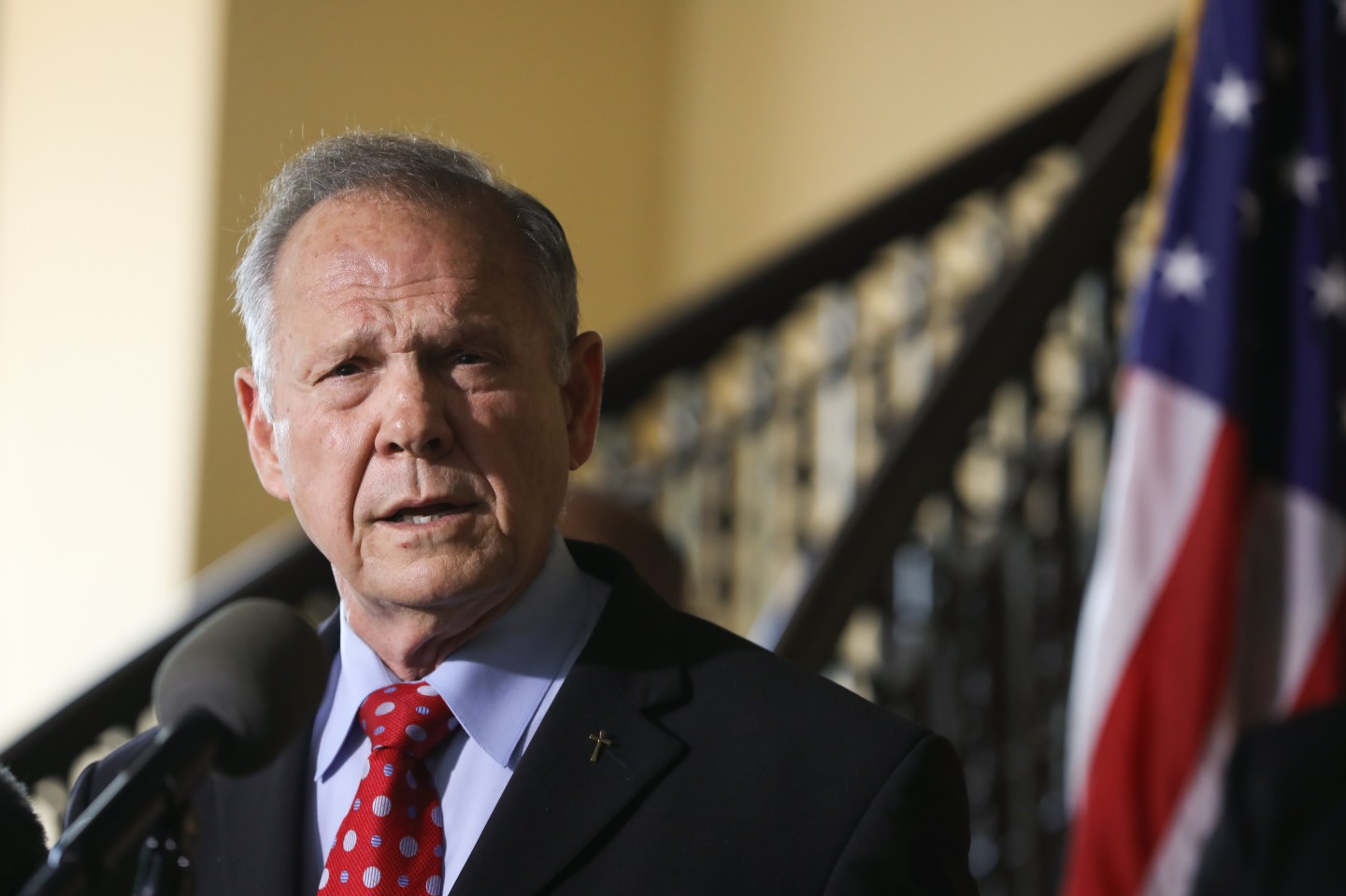 Never one to back down from a fight, Republican Roy Moore is facing a wall of GOP opposition that includes President Donald Trump as he launches another U.S. Senate bid, testing whether he can overcome the sexual misconduct allegations that helped derail his last run.

The question is whether conservative Alabama voters who only narrowly rejected Moore in favor of Democrat Doug Jones will now be willing to side with a maverick known for opposing gay marriage and defending his courthouse display of the Ten Commandments.

Moore, a one-time kickboxer who was twice removed as Alabama’s chief justice for disciplinary reasons, took on national Republican leaders and others in announcing his 2020 campaign on Thursday.

“People in Alabama are not only angry, they are going to act on that anger. They want Washington, and other people outside their state, out of this election,” Moore said. He blamed his 2017 loss to Jones on “a fraud.”

Despite allegations that he made sexual advances on young women decades ago — claims that helped put a reliably red seat in the Democratic column in 2017 — Moore cast himself as a righteous servant who evokes fear inside the Beltway.

“Why does the mere mention of my name cause people to get up in arms in Washington D.C?” added Moore. “Is it because I believe in God, and marriage and morality in our county? … Are these things embarrassing to them?”

“He can do what he wants to, but we’re certainly going to oppose him in every way,” the Kentucky Republican said before Moore’s announcement.

Trump tweeted last month that Moore “cannot win” and said Republicans need to retake the seat to preserve what his administration has accomplished.

“Republicans cannot allow themselves to again lose the Senate seat in the Great State of Alabama,” Trump tweeted.

Asked whether Trump would support or oppose Moore, Erin Perrine — a spokeswoman for the president’s re-election campaign — said only that “I refer you to the president’s previous tweets on the matter.”

During the 2017 race, several women accused Moore of pursuing romantic or sexual relationships with them when they were teenagers and he was an assistant district attorney in his 30s. Two accused him of assault or molestation.

Moore denied the accusations and has said he considered his 2017 defeat, when he lost to Jones by 22,000 votes out of 1.3 million cast, a fraud.

He currently faces a defamation lawsuit from Leigh Corfman, who said Moore touched her sexually when she was 14 after meeting her at the courthouse. Moore has countersued Corfman and other accusers.

Moore retains a strong following among some evangelical voters. He was twice elected the state’s chief justice but was twice stripped of those duties after a judicial ethics panel said he defied, or urged defiance of, federal court orders regarding same-sex marriage and the public display of the Ten Commandments.

His loyal following propelled him to victory in the 2017 primary and could give him another boost in 2020.

“I’m a hundred percent behind Judge Moore,” said Tim Sprayberry of Cleburne County, a supporter at Thursday’s announcement. “Judge Moore is one of the few candidates that I have ever seen that will tell you he is going to do something, and he does it regardless of what the consequences to him personally or his political career.”

Republican pollster Brent Buchanan said the crowded GOP primary will likely head to a runoff and said Moore is in the “catbird seat to have a spot in a runoff.”

But Steven Law, president of a GOP political committee linked to McConnell, said Moore faces tougher challenges this time around. That include competition vying for the same conservative religious voters who comprise the heart of Moore’s support and a less divided GOP, which in 2017 saw former Trump adviser Stephen Bannon helping insurgents like Moore.

“It’s a harder road for him this time,” said Law, who heads the Senate Leadership Fund.