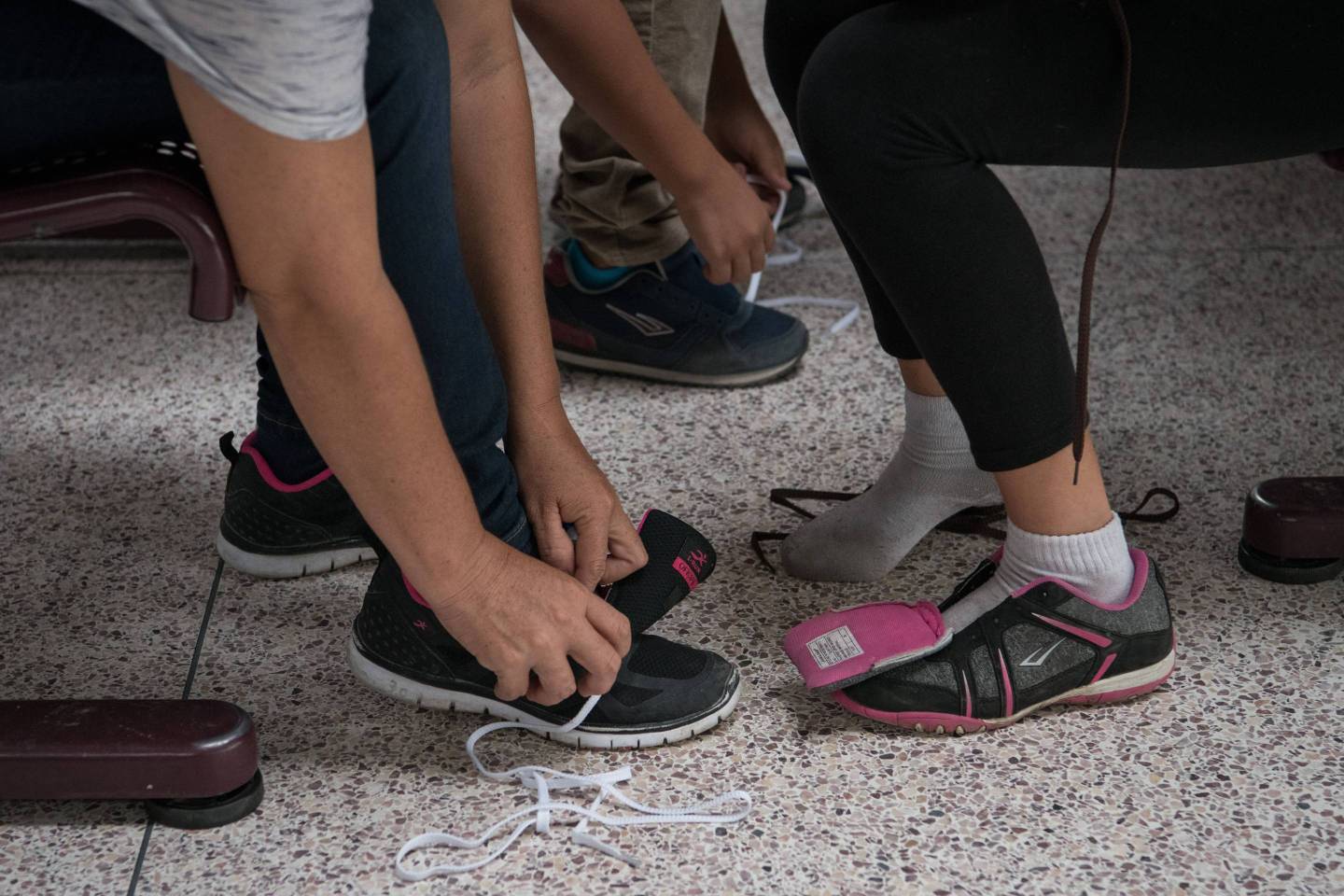 A family of Guatemalan migrants recently released from federal detention put laces back in their shoes after removing them per US Border Patrol apprehension protocol at a bus depot on June 11, 2019, in McAllen, Texas. (Photo by Loren ELLIOTT / AFP) (Photo credit should read LOREN ELLIOTT/AFP/Getty Images)
Loren Elliott—AFP/Getty Images

The teenage girl with pigtail braids was hunched over in a wheelchair and holding a bunched sweatshirt when an immigrant advocate met her at a crowded Border Patrol facility in Texas.

She opened the sweatshirt and the advocate gasped. It was a tiny baby, born premature and held in detention instead of where the advocate believes the baby should have been — at a hospital neonatal unit.

“You look at this baby and there is no question that this baby should be in a tube with a heart monitor,” said Hope Frye, a volunteer with an immigrant advocacy group who travels the country visiting immigration facilities with children to make sure the facilities comply with federal guidelines.

Frye and other advocates said the case highlights the poor conditions immigrants are held in after crossing the U.S.-Mexico border as the government deals with an unprecedented number of families and children arriving daily.

The mother, a 17-year-old from Guatemala, had an emergency cesarean section in Mexico in early May and crossed the border with the baby June 4, Frye said.

She was in a wheelchair in extreme pain when legal advocates found her this week. The girl told advocates she crossed the border through the Rio Grande River but needed people to carry her, and that she also needed help getting into a Border Patrol car when she was apprehended.

The mother and daughter were expected to be transferred to a privately-run facility for underage immigrants without parents on Thursday after outcry on social media.

They were held in an overcrowded McAllen processing facility that holds hundreds of parents and children in large, fenced-in areas and gained international attention last year when it detained children separated from their parents. Advocates describe them as cages and say they are extremely cold. The converted warehouse is the same place where a flu outbreak caused authorities to shut down the facility last month.

The Trump administration has faced daily criticism over conditions in migrant detention facilities.

Five children have died since late last year after being detained by the Border Patrol. Immigrants have been kept outside for extended periods near a bridge in El Paso in conditions that a professor who recently visited the location told the Texas Monthly magazine was like a “human dog pound.”

And an Inspector General report last month found severe overcrowding inside an El Paso processing center, with 76 migrants packed into a tiny cell designed for 12 people. Investigators saw immigrants standing on top of toilets to make room and find space to breathe because the cell was so cramped.

In a letter to Congress this week, the Department of Homeland Security’s acting secretary, Kevin K. McAleenan, and Alex Azar, who heads the Health and Human Services Department, pleaded for emergency supplemental funding.

“We continue to experience a humanitarian and security crisis at the southern border of the United States, and the situation becomes more dire each day,” they wrote.

Customs and Border Protection said its agents are overwhelmed and don’t have the funding or resources to handle the influx. Health and Human Services, the governmental agency in charge of caring for unaccompanied children after they’re released from Border Patrol custody, said it is past capacity with over 13,000 kids in its care at the moment. The agency plans to add new facilities for children in New Mexico, Texas and a military base in Oklahoma.

Families and underage migrants who cross the border are held in Border Patrol facilities meant to be temporary and designed primarily for single adult men — not mothers, newborns and sick toddlers. Families are regularly kept in them for much longer than the allowed maximum of 72 hours.

Frye first met the teenage girl at the McAllen facility on Tuesday. The girl said border authorities made her throw away a backpack with the baby’s clothing and not given her anything else, so the baby was in a dirty onesie bundled in a sweatshirt that another migrant mother gave her.

At one point, the baby got sick and was listless and unresponsive, Frye said.

Frye said the baby and her mother should never have been kept there. She said she not sure how premature the baby was born but described the baby as “minuscule,” with a head was “the size of my fist or smaller than my fist.”

Customs and Border Protection, which runs the facility the girl and baby were held in, has not commented.