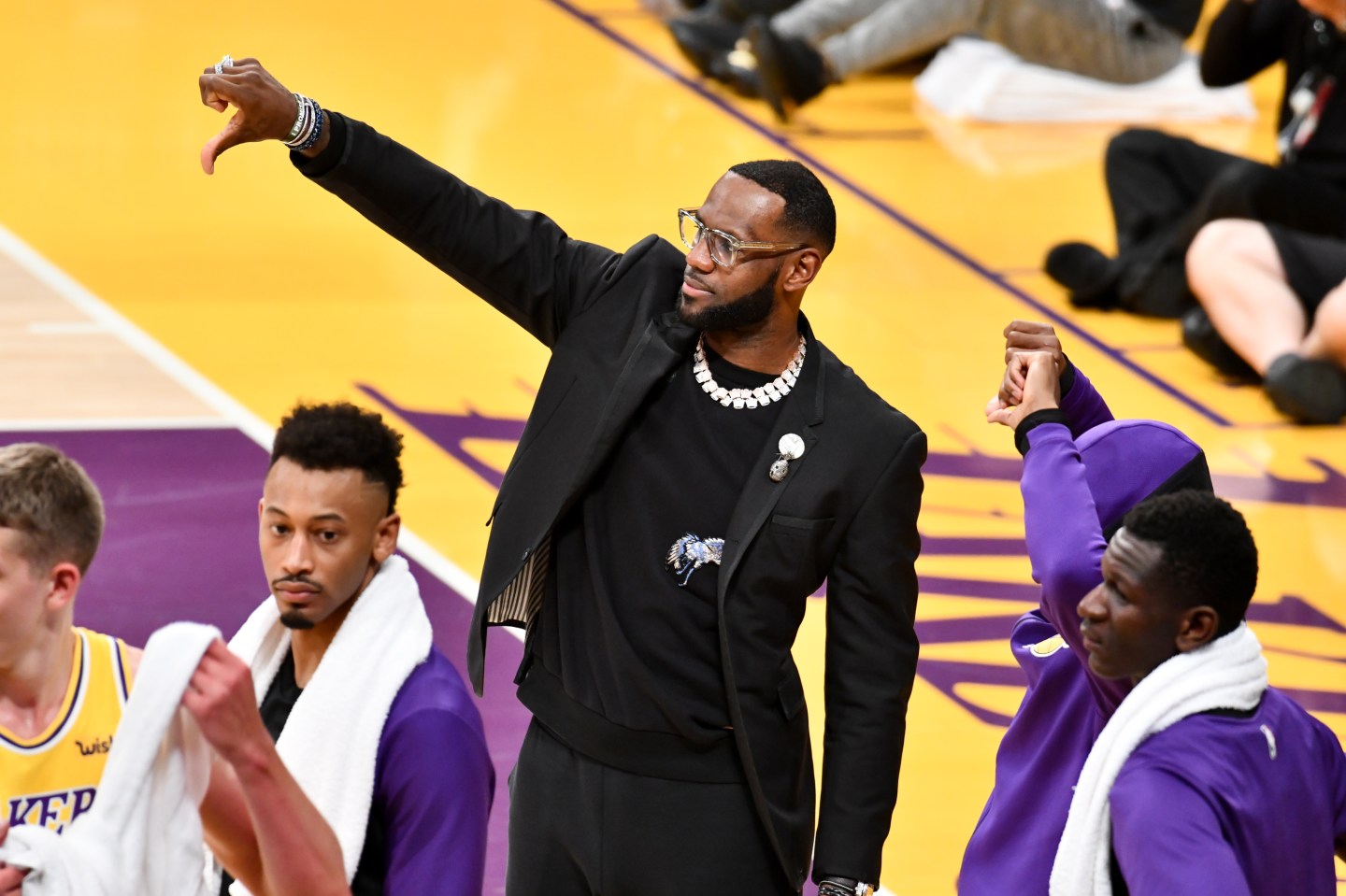 LOS ANGELES, CALIFORNIA - APRIL 09: LeBron James does not like a call against his team during a basketball game between the Los Angeles Lakers and the Portland Trail Blazers at Staples Center on April 09, 2019 in Los Angeles, California. (Photo by Allen Berezovsky/Getty Images)
Allen Berezovsky Getty Images

Even though he has not played in a meaningful game since the end of March, the shadow of superstar LeBron James looms large over this year’s NBA playoffs.

Already James’ move from Cleveland to Los Angeles, or more specifically his move from Eastern Time to Pacific Time, had led to a precipitous drop in television ratings across the league. James, who in this year’s ESPN rankings of the world’s most famous athletes trailed only Portuguese soccer star Cristiano Ronaldo has participated in the last eight NBA finals. His absence this year robbed the league of its most bankable star for its postseason showcase. And the numbers have plummeted.

“There’s no question that the NBA has felt the LeBron factor in this year’s playoffs, as first round television ratings were down 18%,” said Austin Karp, managing editor of Sports Business Journal’s digital platform. “LeBron is in rare air as far as being a marquee television attraction.”

Although there are a few good teams and great players toiling on the East Coast, there simply is not a truly bankable star now that James has taken his talents to Los Angeles, and the television ratings all season long have borne that out. James’ move was felt most by TNT, which saw its regular season ratings this year drop 12% over last year–the network’s lowest mark since 2008. Much of that drop can be attributed to viewership cratering during the early window of the TNT’s national weeknight doubleheaders. Last year, when James played in Cleveland, the Cavaliers were featured 12 times at 8 pm in the Eastern time zone. This year, James’ Lakers only played in primetime on the East Coast four times on TNT, and James was injured for two of those games. Ratings for this year’s opening night doubleheader, which did not feature James in the prime time slot for the first time in years, dropped a whopping 42%.

“There’s no question that LeBron going from east to west was a significant loss for the networks, especially TNT,” said Richard Deitsch, sports media reporter for the Athletic. “The numbers this year make it impossible to come to any other conclusion.”

“The only athlete you could really compare LeBron to as far as moving the needle and turning his games into must-see events for casual sports fans is Tiger Woods,” Karp said. “Without the league’s marquee attraction on the East Coast, there was not really the star power to make up for his loss.”

TNT’s run of bad luck continued this weekend, when the Toronto Raptors eliminated the Philadelphia 76ers in the Eastern Conference semifinals. The Raptors win on Sunday, in which the tip-off time for the game was moved up to 7 pm in order to avoid conflicting with HBO’s Game of Thrones, was coupled with the Milwaukee Bucks victory over the Boston Celtics earlier in the week. That sets up an Eastern Conference finals featuring a team from one of the smallest television markets in professional sports (Milwaukee rates as the 35th largest market in the country) against a team from Canada. Toronto’s continued march in the playoffs is not bad news for the NBA per se, as almost a one-fifth of all Canadians live in or around the country’s largest city. But it stings for TNT, as Canadian viewership is not reflected in the Nielsen ratings.

“They will never say this publicly, but having Milwaukee and Toronto is definitively not what TNT would have preferred,” Karp said. “You are probably looking at a least a double-digit percentage drop in viewership from last year’s Eastern Conference finals (which featured James’ Cavaliers and the Boston Celtics). Toronto would be the third or fourth largest television markets in the United States, but Nielsen just doesn’t measure that in their numbers, which hurts Turner.”

It won’t help TNT, which owns the exclusive television rights to the Eastern Conference Finals, but out west, at least ESPN has the Golden State Warriors. Winners of the last two and three of the last four NBA titles, Deitsch compared the Warriors impact on television viewership to that of the New York Yankees in baseball or the New England Patriots on the NFL – whether people tune in hoping to see them win or praying that they lose, people do tune in. Golden State’s Friday night series clinching win against the Houston Rockets produced ESPN’s second highest-rated conference semifinal game of all-time.

“The Warriors are a national brand, and have become the most popular and polarizing team in the league,” Deitsch said. “As long as the Warriors continue to win, the ratings won’t tank too badly.”

As for ad rates, given that last year’s playoff ratings were high as were the regular season numbers last year were, rates were locked in long before anyone could imagine a playoff season without LeBron. Next year could be where the pain is felt if networks are unable to raise rates for the 2019-20 season

Of course, all this talk of ratings decline is anathema to the legions of hoopheads out there. The NBA’s popularity, especially online, has skyrocketed over the last five years. And close watchers of the league caution that focusing solely on drops in ratings might not tell the whole picture, as streaming services like Sling and Hulu are not factored in to Nielsen’s numbers. But this year’s ratings drop have served as a reality check for all those who have opined about the NBA someday surpassing the NFL for American sports supremacy.

“The NBA has made incredible strides in the numbers, but it is just not in the NFL’s stratosphere yet,” Karp said.

Let’s hope LeBron is using the playoffs to start preparing for a run next year.

—Uber is one of the worst performing IPOs ever