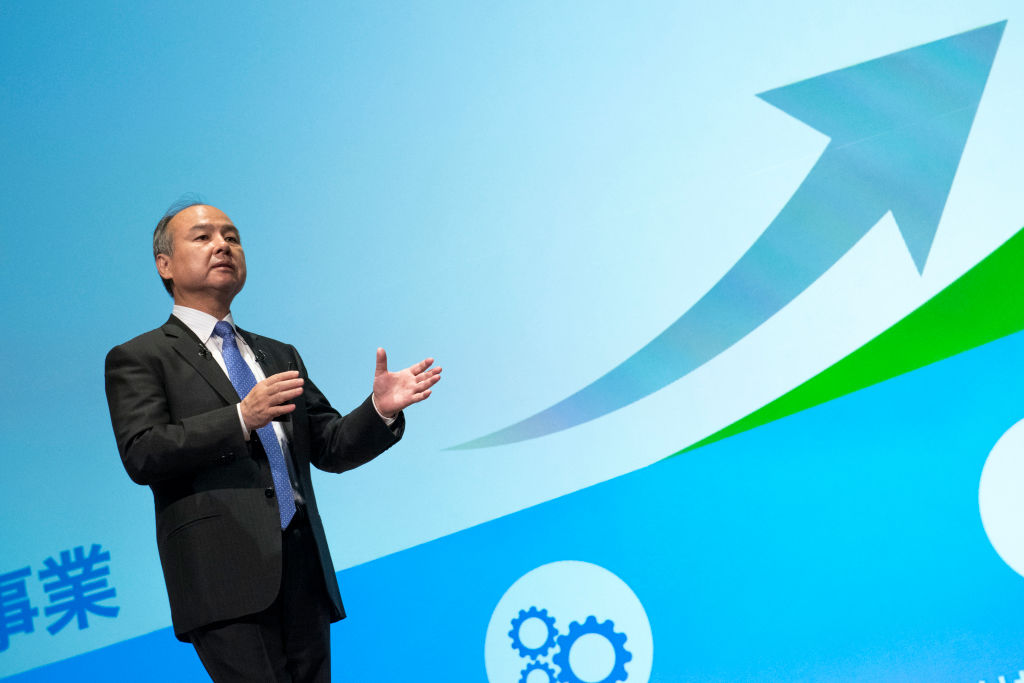 SoftBank’s operating income more than tripled to 494.9 billion yen ($4.5 billion) in the three months to March 31, helped by a 418 billion yen valuation gain from its stake in the ride-hailing giant, the Tokyo-based company reported on Thursday. Uber is going public this week in an offering that may give the company a market value of about $79 billion.

Son has been remaking SoftBank Group from primarily a telecommunications operator into a technology investment firm, and his $100 billion Vision Fund has already emerged as a major contributor to earnings. SoftBank holds stakes in all of the world’s biggest ride-hailing companies, and a successful IPO for Uber could signal more payoffs down the road.

“We only want companies that are No. 1 in their industries,” Son said during a presentation in Tokyo after the earnings. “If you are going to do it at all, may as well be No. 1. I dislike being second, that’s just my personality.”

SoftBank announced a two-for-one stock split along with the strong earnings, while it keeps the same dividend payout per share. That will effectively double the annual dividend year over year.

The Vision Fund and SoftBank’s own Delta Fund contributed 1.26 trillion yen to profit in the fiscal year ended March 31, or slightly more than half of the total. Investments in 29 companies showed an increase in fair value, while 12 reported a decline.

In addition to Uber, SoftBank also booked a 203.4 billion yen valuation gain from its stake in Guardant Health Inc., which went public in October, and a 154.2 billion yen gain in India’s Oyo. It also recorded a 222.6 billion yen loss due to the share price decline in Nvidia Corp.

“The Vision Fund is now the key growth driver for SoftBank and all the attention is on the profits in that segment,” Tomoaki Kawasaki, an analyst at Iwai Cosmo Securities Co., said ahead of the earnings announcement. “There is a growing expectation in the market that profit gains will continue into this fiscal year.”

Son opened the earnings briefing with a slide of a graph snaking sharply up from 1999 to the present time. “Just remember this graph, the rest is error margin,” Son said. “Who knows what this is? Whoever can guess right must be a real expert.”

After dismissing audience guesses of SoftBank Group’s operating income and value of portfolio companies, the reveal—shareholder value. Son said the company is worth 23 trillion yen, or more than 21,000 yen a share. SoftBank’s shares closed at a discount of more than 40% to that number and a market cap of 12.7 trillion yen.

Son has long railed against the valuation gap, but investors are starting to come around. The shares have gained almost 60% this year, thanks to a record 600 billion yen share buyback and prospects of payoffs from Son’s technology bets. The billionaire said Vision Fund has already delivered a 45% rate of return after fees to limited partners on net equity basis. For SoftBank shareholders the return is 62%, he said.

“There is no venture capital or private equity that delivers this kind of return,” Son said. He added that SoftBank plans to set up a second Vision Fund soon and then will get investors on board.

SoftBank also invested into Slack Technologies Inc. in September 2017 in a financing round that valued the seller of chat and collaboration tools to businesses at $5.1 billion. The San Francisco-based company could now be worth more than triple that, at $16 billion when it goes public in June or July.