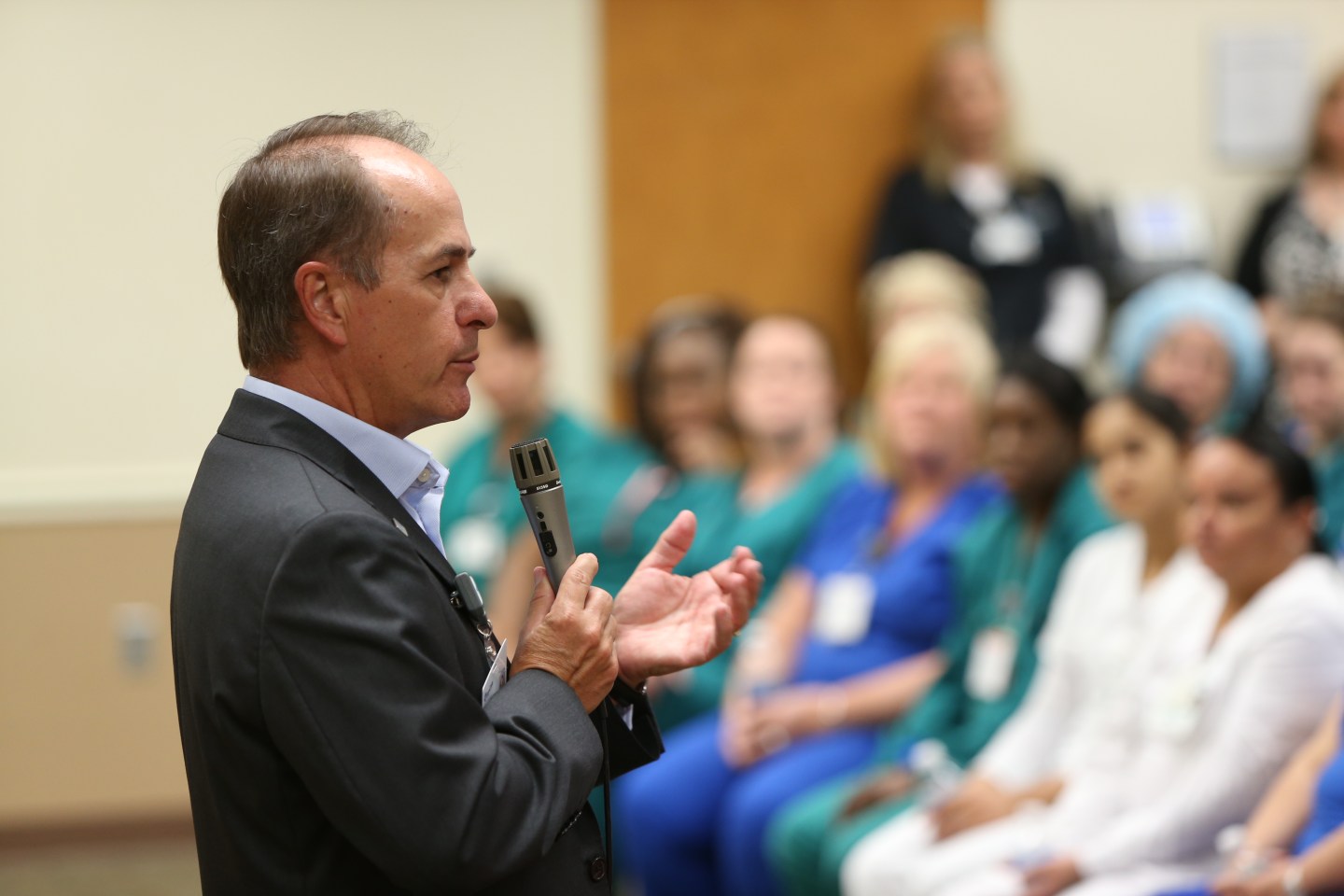 Nina Tolentino-Stephenson will tell you one of the best things about working at a BayCare hospital is coffee break time, but she isn’t talking about a typical coffee break. The assistant nurse manager means the way senior leaders of the Tampa Bay health system sometimes wheel a coffee cart through hospital hallways, serving cups of joe to their 28,000 employees.

The java gestures on the part of her hospital president and director of nursing show Tolentino-Stephenson that she and her colleagues are valued, and that executives are in the same boat as all staffers. “They really make us feel like they’re just one of us,” she says.

With its leaders acting as servants to their people, it’s not surprising that BayCare Health System earned a spot on the newly published 2019 list of the Best Workplaces in Health Care & Biopharma, compiled by people analytics and research firm Great Place to Work in partnership with Fortune.

It’s a tumultuous time for the health care and biopharmaceutical industries. The country’s insurance and payment system remains uncertain, with the Trump administration challenging the Affordable Care Act in the courts. New players are entering the health care arena, including retailers like CVS and Walgreens, and the public is pressuring both health care providers and drug companies to cut costs and improve quality.

What’s more, there’s an ongoing nursing shortage in the United States, and low unemployment overall makes it difficult for organizations in health care and biopharma to find and retain talent.

One positive counter-trend to the tight labor market is that many job-seekers today are keen to find positions with an inspiring purpose. The health care industry and its promise to heal people with services and medicines provides many opportunities to make the world better.

Biopharmaceutical firm AbbVie is doubling down on the purpose piece. AbbVie, which is headquartered in the Chicago area and makes medicines to treat diseases including rheumatoid arthritis, leukemia, and hepatitis C, earned a spot on the 2019 list of the Best Workplaces in Biopharma. In February, the company revealed a new list of “Principles” to employees and the general public. Among the principles are “Transforming Lives,” “Acting with Integrity,” and “Driving Innovation.” The final two tap into wider social concerns: “Embracing Diversity & Inclusion” and “Serving the Community.”

Values statements like these can be little more than a public relations ploy. Not so in AbbVie’s case, says Tim Richmond, the company’s executive vice president and chief human resources officer. Richmond says the AbbVie Principles emerged from conversations with many of the company’s 30,000 employees from all over the world to understand what made them proud to work for AbbVie and what they believe AbbVie stands for.

Richmond expects the new principles to draw and keep talent at AbbVie.

“It’s more important than ever for us to be able to answer the questions: ‘What do we believe in? What do we stand for as a company?’” he says.

Tommy Inzina, CEO of BayCare, has a clear answer to the question of company mission. As a non-profit system of 15 hospitals, clinics, and other health care facilities, BayCare’s ultimate goal is to serve the Tampa Bay community with high quality care.

The main way to do that, Inzina says, is to build an extraordinary team of employees who are motivated to give their best for patients. “Health care, at the end of the day, is a people business,” Inzina says.

He rose up through the ranks as an accountant and finance professional. And 15 years or so ago, when he supervised a remote office with 100 hourly employees, he spent very little time visiting his staff.

“I convinced myself that they wouldn’t care if I went over there,” Inzina says. “I was more your stereotypical finance guy.”

Inzina hasn’t stopped concentrating on the numbers. But he’s focused as well on his people these days. When he became CEO in 2015, he wanted to demonstrate he was a down-to-earth person people could relate to. So he and his team launched a monthly video to the entire staff—with the first ones showing him with his wife and dog. He also began holding town hall meetings every two weeks or so. And twice a month, he has breakfast or lunch with non-management team members at various BayCare facilities.

“The idea is that people can hear you and see you,” Inzina says. “It makes a big difference.”

A difference that shows up in BayCare’s strong performance in hospital rankings, Inzina says. Last month, several BayCare hospitals were named to the prestigious IBM Watson Health™ 100 Top Hospitals® annual study. In addition, St. Joseph’s Hospitals—one part of the BayCare system—was recognized as the only hospital in Florida to earn the “100 Top Everest Award” for greatest improvement over five consecutive years.

Even with the industry honors and a growing market share, BayCare can’t afford to be complacent about its culture or its service quality, Inzina says. In fact, one of his priorities is to help his hospitals take on features typically associated with hotels in order to keep up with patient preferences. “Their expectations are beginning to be more like what they’d expect from hospitality or retail companies,” Inzina says.

That means changes like big screen TVs with cable options, tablet computers in rooms for ordering food, and hospital staff who bring the food acting like high-touch restaurant servers.

All the more reason for those coffee cart days where executives serve Tolentino-Stephenson and her colleagues.