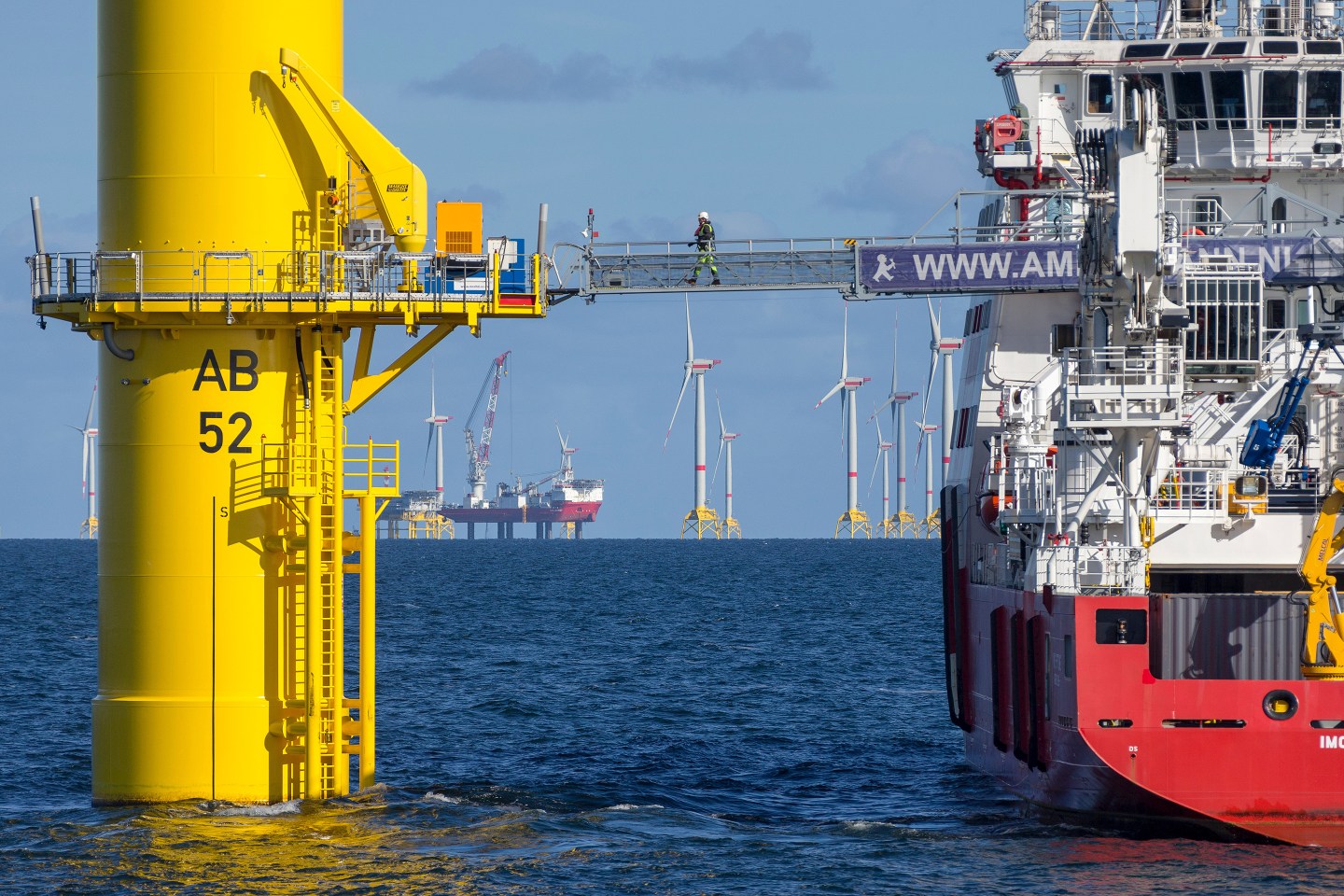 Mandatory Credit: Photo by JENS KOEHLER/EPA-EFE/REX/Shutterstock (9881302e) The Dutch-flagged offshore support vessel 'Vos Stone' has stopped at a wind turbine in the wind farm 'Arkona' in the German Baltic Sea near the island of Ruegen, Germany, 13 September 2017. The currently largest wind farm in the Baltic Sea is in its final construction phase with 40 of the planned 60 wind turbines already built. The last turbine is expected to be installed by the end of October 2018. The wind park with a capacity of producing up to 385 megaWatts of electric power costs 1.2 billion euros. It is planned to start its electricity production at the beginning of the year 2019. Most powerful wind farm in German Baltic Sea, Sassnitz, Germany - 13 Sep 2018
Jens Koehler—EPA-EFE/REX/Shutterstock
The rise of cheap renewable energy is starting to upend the bottom lines of fossil-fuel companies the world over. Initially, that was why so many of them instinctively fought the newfangled technologies. Increasingly, it’s why many of them are shifting strategy, hustling to try to profitably harness the wind and the sun.
In the latest sign of this sea change, Equinor, the Norwegian oil-and-gas giant formerly known as Statoil, will announce today that it plans to pour money into an approximately $180 million investment fund focused on battery and related technologies, Fortune has learned. That tech is intended to spread the use of renewables by allowing them to be stored in ways that make economic sense.
The Chicago-based fund, Volta Energy Technologies, is run by battery and technology-commercialization experts and grew out of the U.S. government’s Argonne National Laboratory, a site of extensive battery research. Volta seeks to serve traditional energy behemoths that have concluded they must play in the emerging battery race but lack the in-house technical expertise to play it smartly. It has made four investments so far and has more in its sights.

Norway’s move won’t require the pension fund to divest from such firms as BP and Shell, both because they refine oil in addition to producing it and because they have renewable-energy operations. And Jensen said Norway’s government doesn’t plan to sell its shares in Equinor. Equinor, moreover, is ramping up its renewables operations, and it began negotiating with Volta long before the government’s announcement. Still, the repudiation of investment in oil-and-gas exploration-and-production companies by the sovereign-wealth fund of Norway, a country whose treasury is based largely on oil-and-gas revenue, underscores the massive change roiling the energy industry.

A growing roster of backers

Volta said Hanon Systems, a Korean maker of automotive energy-management systems, also has pledged to invest in the Volta fund. But Volta wouldn’t disclose how much Equinor or Hanon are ponying up. Similarly, Volta declined to say how much its two existing investors — Exelon (EXC), a large Chicago-based power producer, and Albemarle Corp. (ALB), a Charlotte, N.C.-based producer of lithium, a main material in batteries — have agreed to chip in. Unlike in traditional venture-capital funds, in which investors write checks and leave it to fund managers to dole out the money, Volta’s investors get to decide, for each potential Volta investment, whether to buy in or to take a pass.
Cumulatively, though, the four companies have pledged to invest about $180 million through Volta, and that represents a notable jolt for the burgeoning energy-storage industry. Volta follows other major funds, including Breakthrough Energy Ventures, a pool in which uber-wealthy individuals such as Bill Gates, Jeff Bezos, Jack Ma, and Michael Bloomberg have pledged to invest a cumulative $1 billion over some 20 years in world-changing energy technologies. Among them: batteries.
Volta will invest in battery technologies and in related areas such as artificial intelligence and methods to quickly charge electric vehicles, says Jeff Chamberlain, the fund’s chief executive.
For fossil-fuel giants, the champions of the centralized production of energy from the earth, the rise of decentralized production of renewable energy is a threat. “It’s important to see threats,” he says, “and it’s important to decide whether you want to fight those threats or view them as opportunities.”
Equinor in 2016 established a corporate-venture fund with a goal to invest about $200 million over four to seven years in what the petroleum company calls “new-energy” technologies. That’s a small sum for Equinor. For 2018 alone, the company reported spending on what it calls “organic” capital expenditures of $9.9 billion — money that, as at other petroleum giants, remains focused on fossil fuels. But Equinor, like energy analysts broadly, envisions renewables growing briskly, and it sees energy storage as key, says Gareth Burns, an Equinor vice president and managing director of Equinor Energy Ventures.
Storing oil and gas, Burns notes, is easy: “You just need a really big tanker.” Storing renewable energy for long periods, in contrast, isn’t yet broadly economic — but it’s crucial for a major renewables ramp-up, because the sun doesn’t always shine and the wind doesn’t always blow. “If there were a viable long-term utility-scale storage solution” for renewable energy, Burns says, “that would be a major game-changer for the energy business.” Equinor is working through Volta, he says, because “actually picking the right storage solution is very difficult.”
The calculus is similar at Exelon, one of the biggest U.S. electricity generators. Exelon anticipates spending money rolling out batteries and related equipment for a renewables-friendly electric system just as it has long spent money rolling out traditional energy infrastructure. “And with that investment,” notes Chris Gould, an Exelon senior vice president and the company’s chief innovation and sustainability officer, “comes the opportunity for return.”
Myriad technologists these days are knocking on Exelon’s door peddling what they claim is the ultimate battery. Through Volta, Exelon hopes it’ll get help sussing out what’s real.