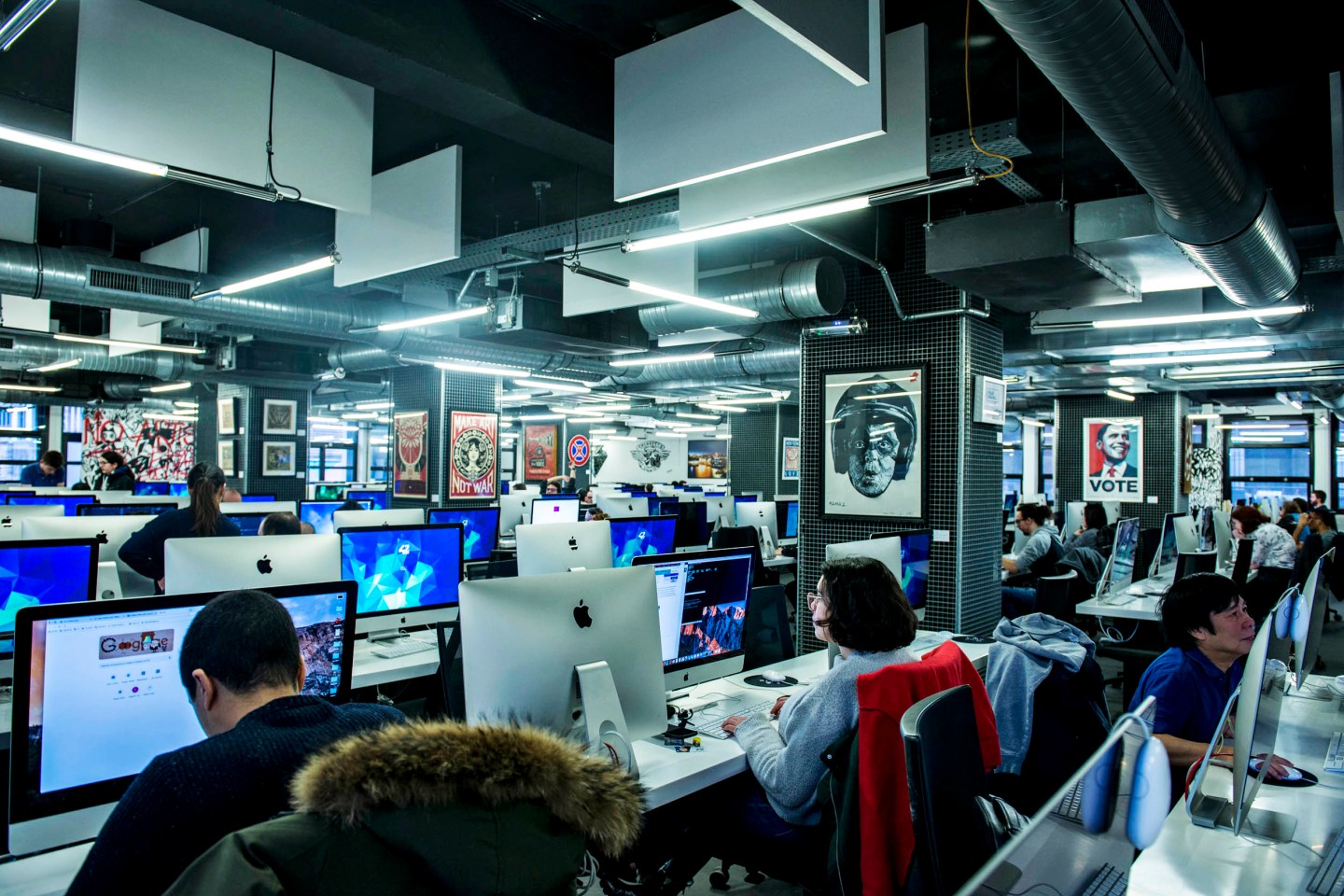 Back in October 2016, James Aylor was scraping by, delivering pizza in Kansas City, having dropped out of college, abandoning his dream of teaching viola. “The voice in my head said, ‘You have no career. No future,’ ” he says.

Then a friend mentioned he had heard about a new, tuition-free coding school 1,800 miles away in Fremont, Calif. Named 42, it required no computer skills or even a high school diploma, and dorm rooms were free. “I said, ‘Yeah, whatever, ha ha, free,’ ” recalls Aylor, now 30. Still, he decided he had “absolutely nothing to lose.” He sold his car and bought a plane ticket west.

When I meet Aylor a little more than two years later, he is in northern Paris, strolling through the lobby of the original 42 school, of which Fremont is an offshoot. The radical educational experiment is geared to solving the tech industry’s chronic shortage of skilled programmers. With his pizza gig a distant memory, Aylor says he is now juggling potential jobs, weighing whether to join a company when he graduates this summer or launch a startup. “There are so many possibilities,” he says.

Back in 2013, I visited 42 for Fortune as its first batch of students was moving in—literally: Many had arrived in Paris with no money, rolling out sleeping bags in 42’s factory-style campus. Takeout cartons and beer bottles littered the rooms. Standing amid the tumult, 42’s founder, billionaire telecom exec Xavier Niel—one of the richest people in France—was thrilled. “We’ll have some impact,” he told me then.

Niel’s brazen idea drew from his own experience. With no college degree, he taught himself coding and created programs (including a sex-chat app he sold for about $50 million) on France’s pre-Internet Minitel service. He went on to found the publicly traded group Iliad, parent of the low-cost telecom company Free, and in 2017 opened the giant tech incubator Station F in eastern Paris. Niel, now 51, says he was increasingly convinced that France’s traditional education (“the worst!” he says) boxed kids into preordained tracks, leaving them bored and uninspired; he felt the effects in his own companies.

The 42 school, which Niel built with $78 million of his own money, tries to shatter those conventions. It has no fees, teachers, or classrooms. Students work their own hours. If they need help, they ask each other or figure it out themselves. In keeping with the rebel spirit, the school’s name refers to the counterculture classic The Hitchhiker’s Guide to the Galaxy, which says “the answer to everything” is 42; the first building had a pirate’s flag outside. About 1,800 students are admitted each year between the two campuses, chosen from about 3,000 who are accepted into 42’s grueling monthlong boot camp called Piscine, French for “swimming pool.” Those 3,000 are picked from the initial 40,000 people who take 42’s online logic test every year.

The pirate’s flag has gone, and there are only a few sleeping bags in the corridors. The walls display an impressive art collection, and President Emmanuel Macron, a cheerleader for the French tech industry, is a frequent visitor. Yet 42 still has the feel of a messy startup, with dozens of people at monitors and a stack of skateboards in the lobby.

RISQUÉ: From sex chats to a stake in a chain of peep shows, Niel’s business history has been colorful. He was convicted in 2006 for embezzling 200,000 euros from one of his sex shops.

HIS WAY: Niel is co-owner of the publishing rights to the song “My Way,” popularized by Frank Sinatra, which was originally written with French lyrics.

NEWSMAN: To the chagrin of former President Nicolas Sarkozy, Niel was part of a consortium that bought the prestigious Le Monde newspaper in 2010.

But how much impact has 42 had, nearly six years in?

Niel is convinced that 42 has proved his point: that programmers need only two things to succeed—a grasp of logic and driving ambition. “You don’t need to know anything to be able to code. You don’t need to be good at math,” he says, sitting atop Iliad’s headquarters, with a sweeping view of Paris. “You can take anyone in the street, and”— he snaps his fingers—“they can become the best coder in the world.” About 40% of the students have not graduated from high school. “The idea was you don’t choose people by seeing if they can do something,” Niel says. “You completely forget what they did before.”

Jasmine Anteunis, 26, joined 42’s first intake after quitting fine-arts school at 21. Two years later, she created an artificial intelligence chatbot, Recast.AI, with two fellow 42 students. They sold last year to software giant SAP. Are you rich? I ask. “Ah, yes,” she says, blushing. One of Anteunis’s classmates, Balthazar Gronon, 25, left Paris in February for San Francisco, where he launched a blockchain company called Ashlar—in a sharp break from his original plan to be an economist, he says. And Niel says even old-style French companies like banks and fashion houses are now recruiting 42 students.

But in California, 42 has struggled for credibility since opening in 2016. It fills only about one-third of its capacity of 3,000 students. (To attract a greater number, the school now offers more frequent Piscine boot camps.) Niel, famous in France as a visionary entrepreneur, is unknown in the U.S. And ironically, a major hurdle for 42 appears to be that it is free—despite Americans being crippled by student debt. Says Niel, “When you are tuition-free, people think it is a fraud.”

A version of this article appears in the April 2019 issue of Fortune with the headline “Is 42 the Answer?”