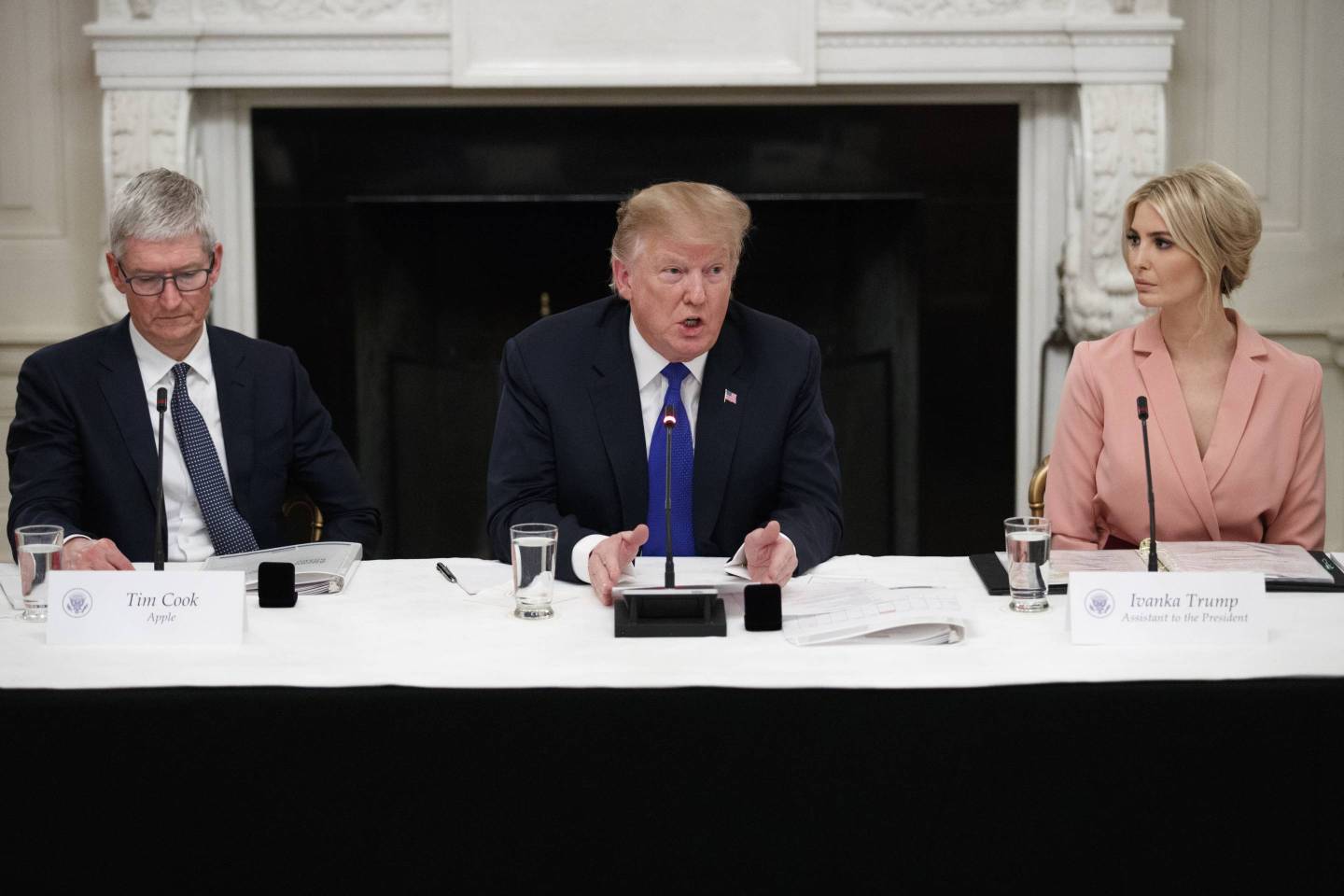 WASHINGTON, DC - MARCH 06: U.S. President Donald Trump delivers remarks as Apple CEO Tim Cook and Ivanka Trump look on during a meeting with the American Workforce Policy Advisory Board inside the State Dining Room on March 6, 2019 in Washington, DC. The board, co-chaired by Ivanka and Commerce Secretary Wilbur Ross, is tasked with developing a strategy to revamp the U.S. workforce for well-paid, in-demand jobs and with promoting private-sector investments in workers. (Photo by Tom Brenner/Getty Images)
Tom Brenner—Getty Images

Apple CEO Tim Cook sat next to President Donald Trump during an American Workforce Policy Advisory Board meeting on Wednesday. The president even said the Apple CEO had “become a friend of mine.”

But when the time came to call his friend by his name, Trump massively fumbled the Apple CEO’s name.

“People like Tim, you’re expanding all over and doing things that I really wanted you to do right from the beginning. I used to say, ‘Tim, you gotta start doing it here,’ and you really have you’ve really put a big investment in our country. We really appreciate it very much, Tim Apple,” Trump said, a little more than one hour into the meeting. Video of the entire meeting, including the awkward moment, was posted on the White House YouTube account.

The meeting on Wednesday was the first of the newly convened American Workforce Policy Advisory Board, which is tasked with finding solutions to prepare millions of Americans for the shift toward automation and artificial intelligence in the workplace.

Last month, the U.S. Department of Commerce announced 25 members of the board, which is co-chaired by Secretary of Commerce Wilbur Ross and Ivanka Trump. Cook is joined on the board by IBM CEO Ginni Rometty, along with other business executives, including the CEOs of Walmart, Lockheed Martin and Home Depot. The group also includes two governors and leaders from trade groups.

Of course, the moment went viral, and prompted plenty of Twitter jokes and comments.

Getting the whole gang together:

It appears the president may have unintentionally just given Tim Cook a new nickname that won’t be going away anytime soon.