The New Faces of Watch Design 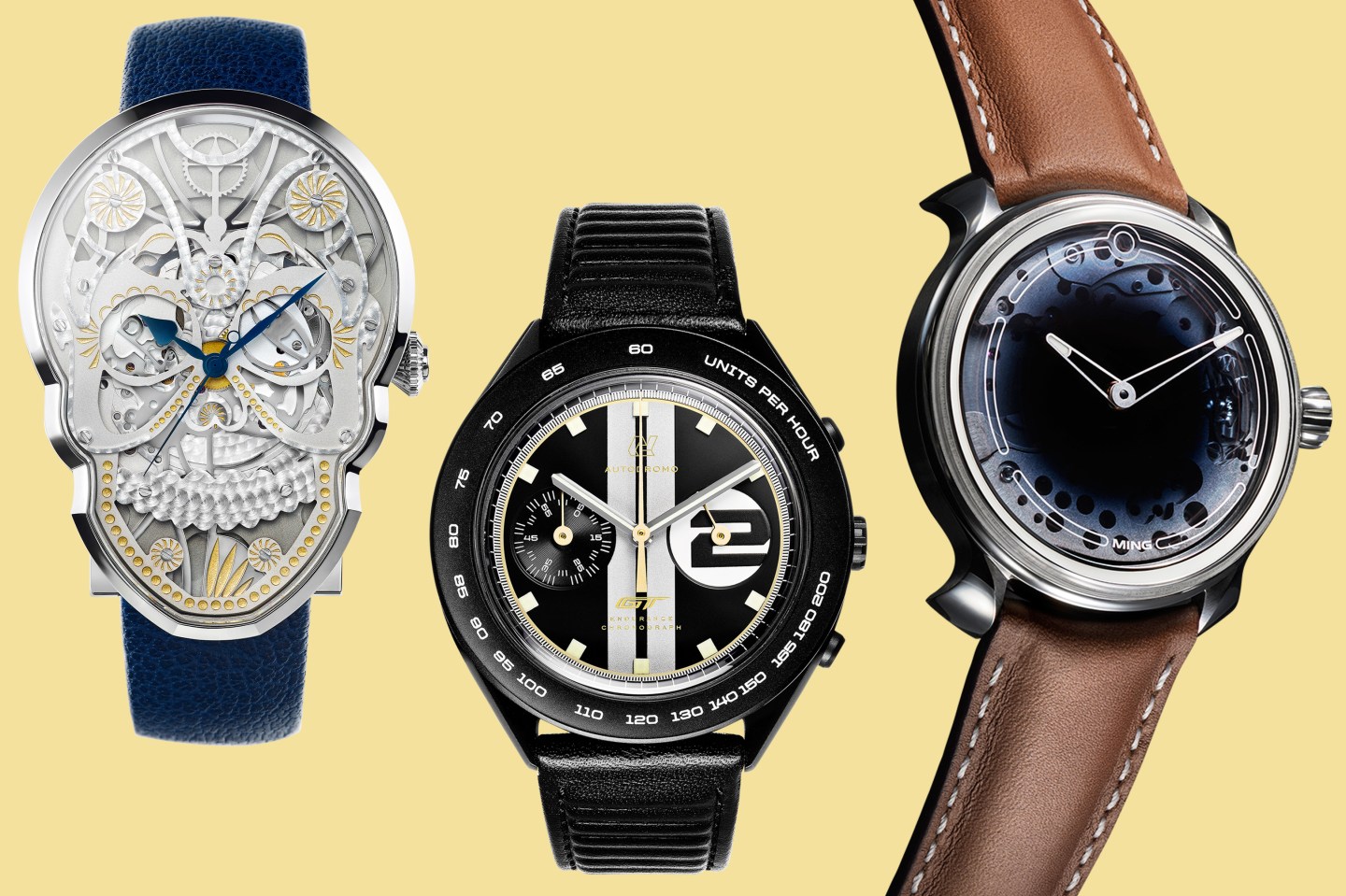 If your notion of a watchmaker conjures up images of a wizened man, loupe affixed to his face, tinkering with a variety of tiny cogs and wheels in the Vallée de Joux, Switzerland’s famed horological hub, think again.

There’s a new wave of independent watchmakers shaking up the timepiece world and gaining currency among both the wide-eyed newcomer and the seasoned, moneyed collector. Stretching across the globe, these makers and designers are bringing an untraditional twist to a very traditional industry. Unlike the marquee indies of recent vintage—Roger W. Smith, MB&F, Kari Voutilainen, Greubel Forsey, and Christophe Claret, to name a few—this crop is schooled in a number of disciplines, from art to physics, although not necessarily horology.

Eric Wind, a Florida-based watch dealer, says that while a number of these new indie microbrands have been percolating over time, they really exploded in the past year. “There are more of them, they’re making great-looking watches, and their construction has gotten better,” says Wind, who’s noticed that many of his clients, regular purchasers of six-figure watches from legacy brands, are adding these new indies to their collections. “I myself have bought a number in the past two years.”

The astute watch enthusiast has always been on the hunt for the rare and exclusive. These independents appeal in part because they produce small batches, champion distinctive aesthetic perspectives, can take advantage of the availability of quality components, and eschew traditional retail distribution chains. What’s more, price points can start at a reasonable $250 and
go up from there.

“The only modern watches that get me excited are these indie brands,” says longtime vintage collector Kevin O’Dell, who estimates he has about 70 pieces, including those from Rolex, Patek Philippe, Panerai, and IWC.
“I feel like established watch brands lack inspiration,” he says, finding that the indies “are building a brand, not just a name.”

Scottish-born Krüger’s entrée into horology was by chance. While earning her fine arts master’s degree at the École Cantonale d’Art de Lausanne, she took a course sponsored by watch brand Audemars Piguet, where she was tasked with designing a timepiece: “I thought this was above my skill set. Watches weren’t really on my radar.” A visit to AP’s factory and the Patek Philippe Museum soon changed her mind. “The first time I saw the assembled movements and the precision of working on that micro scale, I thought, ‘Wow, this is special.’ ” She calls Patek’s historical collection “Willy Wonka’s chocolate factory for designers.” For her master’s project she designed a skull-shaped watch, inspired by her childhood spent in Mexico. After putting a prototype online in 2011, she received over 100 inquiries. In 2013, Krüger along with her husband, Michael, launched her company with the Skull Collection. Last year, Krüger, who also makes custom orders, debuted her second collection, Chaos, inspired by the laws of thermodynamics and Roy Lichtenstein paintings. Timepieces range from $12,900 to $28,550: “I came to watchmaking as a complete outsider and discovered this whole magical world, a mix of storytelling and beautiful craftsmanship.”

An industrial designer with a love for automobiles, Price debuted his car-gauge-inspired watches in 2011: “I’ve always been a car enthusiast, and there was nothing in the marketplace for me. I wanted an automotive-inspired watch that was tasteful and priced in an affordable way.” For Price, who says he had a wealth of ideas, the challenge was to transform them into timepieces. He went to watch fairs and brought his drawings to manufacturers. “I found I had to go back and start over. A lot of what I wanted to do had limitations, but I learned a lot from factory engineers.” Price has launched two watches with Ford: One is a vintage-inspired chronograph celebrating the Le Mans race, priced at $695, and the other, released last year, is a made-to-order customized piece available only to Ford GT owners. The watch is serialized to match their chassis number and priced at $11,500. “What I’m trying to achieve each time is to come up with a new watch that makes people excited again and fall in love.”

Multihyphenate renaissance man Thein—photographer, chief of strategy for Hasselblad, brand designer, and theoretical physicist—began designing watches because he found his tastes outpaced his wallet. About four years ago, on the way back from a Hong Kong watch fair, he joked with six of his friends, “Let’s make our own.” Tapping his contacts in the watch world and meeting with suppliers, Thein says the process involved years of designing and redesigning. In 2017 he unveiled the Ming 17.01, a limited-edition minimalist piece in which the depth and variety of color of the dial change based on ­ambient lighting. All 300 pieces sold out immediately. In 2018 the Ming 19.01 was selected as a finalist in the Grand Prix d’Horlogerie de Genève—the horological Oscars. Thein says he’s aiming for somewhere between the entry-level buyer and the moneyed vet (prices range from $1,290 to $7,850). “We want to make watches that are fundamentally interesting to us as collectors,” he says. “It’s a challenge to keep things continually fresh but not deviate from our design DNA.”

For many, Hodge is a familiar face as an actor, starring in Hidden Figures, Straight Outta Compton, and the upcoming Showtime series City on a Hill. Off-camera, he’s a devotee of horology and a watch collector. Inspired by the designs of Gerald Genta and Greubel Forsey, Hodge has been quietly developing a watch for several years and is in the process of manufacturing a prototype. Ten years ago he approached Hamilton about a collaboration, but he says they found his concept too complex, so he decided to go it alone. A serious student of engineering, design, and horology, he keeps a notebook full of his renderings with him and can hold forth about the history and technical minutiae like others discuss wine or art. “[I studied] biochemical engineering and automotive engineering,” he says. “What I like is design. I like figuring things out and then figuring out how we make them play in different ways. And I want to give the world my vision.” Currently working with partners to make his vision a reality, Hodge is keen to launch his line in the next two years. He’s aiming for legacy: “I want to be able to contribute something great.”

A version of this article appears in the February 1, 2019 issue of Fortune with the headline “The New Faces of Watch Design.”