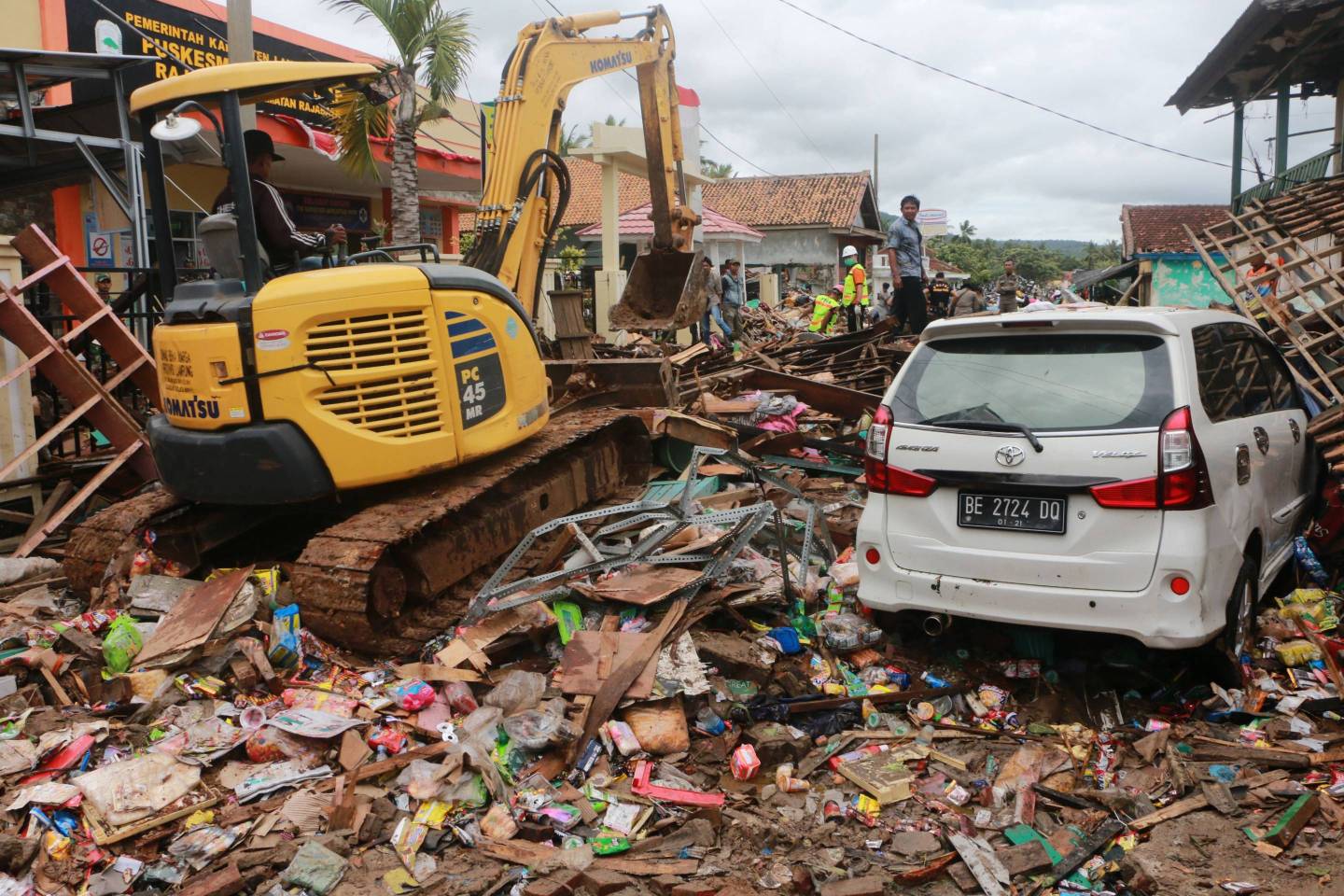 Rescuers look for survivors along the coast in South Lampung on South Sumatra on December 23, 2018, after the area was hit by a tsunami on December 22 following an eruption of the Anak Krakatoa volcano. - A volcano-triggered tsunami has left at least 222 people dead and hundreds more injured after slamming without warning into beaches around Indonesia's Sunda Strait, officials said on December 23, voicing fears that the toll would rise further. (Photo by Ferdi Awed / AFP)
Ferdi Awed—AFP/Getty Images

The death toll from a tsunami triggered by suspected volcanic activity near the Sunda Strait in Indonesia has topped 200 as rescuers continue to search for dozens missing in the tourist region.

More than 220 people, mostly tourists, are confirmed dead, at least 843 injured and dozens are missing in the two provinces hit by waves late on Saturday, according to Sutopo Purwo Nugroho, a spokesman at the National Disaster Mitigation Agency. More than 550 homes, several hotels and hundreds of boats were damaged when the tsunami hit shores in Pandeglang, South Lampung and Tanggamus regencies of Lampung and Banten provinces.

Click to read more about impact of quake, tsunami on Indonesian economy

Indonesia’s meteorological agency is investigating the cause of tsunami, though it suspects under-sea erosion triggered by volcanic activity of Mount Anak Krakatau and moon gravitation was the cause, Nugroho said. The death toll could climb as searchers access more areas hit by the tsunami, he said.

The latest in a series of natural disasters to strike Southeast Asia’s largest economy this year is set to pose a fresh challenge for President Joko Widodo to rehabilitate the thousands of people displaced amid a presidential election campaign. The tsunami, coming ahead of the peak holiday season, may also hurt the all-important tourism industry and weigh on the nation’s currency, among the worst performers in Asia this year.

Widodo, known as Jokowi, offered his condolences to the victims’ families and ordered authorities to step up relief operations and identify the damage caused by the tsunami, according to an official statement.

The tsunami hit Tanjung Lesung, a surfing haven in the western-most part of the Java island and branded a new Bali by Jokowi’s administration. Three to four hours from capital Jakarta, Tanjung Lesung shares its coastline with Ujung Kulon National Park, and is located near factories of state-owned steelmaker PT Krakatau Steel and PT Chandra Asri Petrochemical.

Twenty nine people, mostly employees of state-run electricity producer PT Perusahaan Listrik Negara, were killed when a tsunami wave swept away the venue of a live music concert attended by about 200 people in Tanjung Lesung. The company said 13 people were still missing while 157 survived.

No significant damage was reported by companies with major factories nearby. Chandra Asri’s production and operations are not affected, while employees are accounted for, said Corporate Secretary Suryandi.

Lampung’s Panjang Port, the main gate for robusta coffee exports, is operating normally, according to Qudratul Ikhwan, head of the provincial transportation office. Indonesia is the world’s third-biggest robusta producer.

Indonesia’s 17,000 islands are prone to earthquakes because the country straddles the Pacific Ring of Fire, an arc of fault lines and volcanoes that causes frequent seismic upheavals. The Mount Krakatau is about 156 kilometer west Jakarta and its eruption in 1883 was one of the deadliest volcanic eruptions in the world, killing more than 36,000 people.

More than 2,000 people were killed and about 80,000 people displaced in Central Sulawesi in September after a devastating earthquake and tsunami struck the island. That was preceded by a series of deadly earthquakes early this year that rattled the popular tourist destination of Lombok island, near Bali.