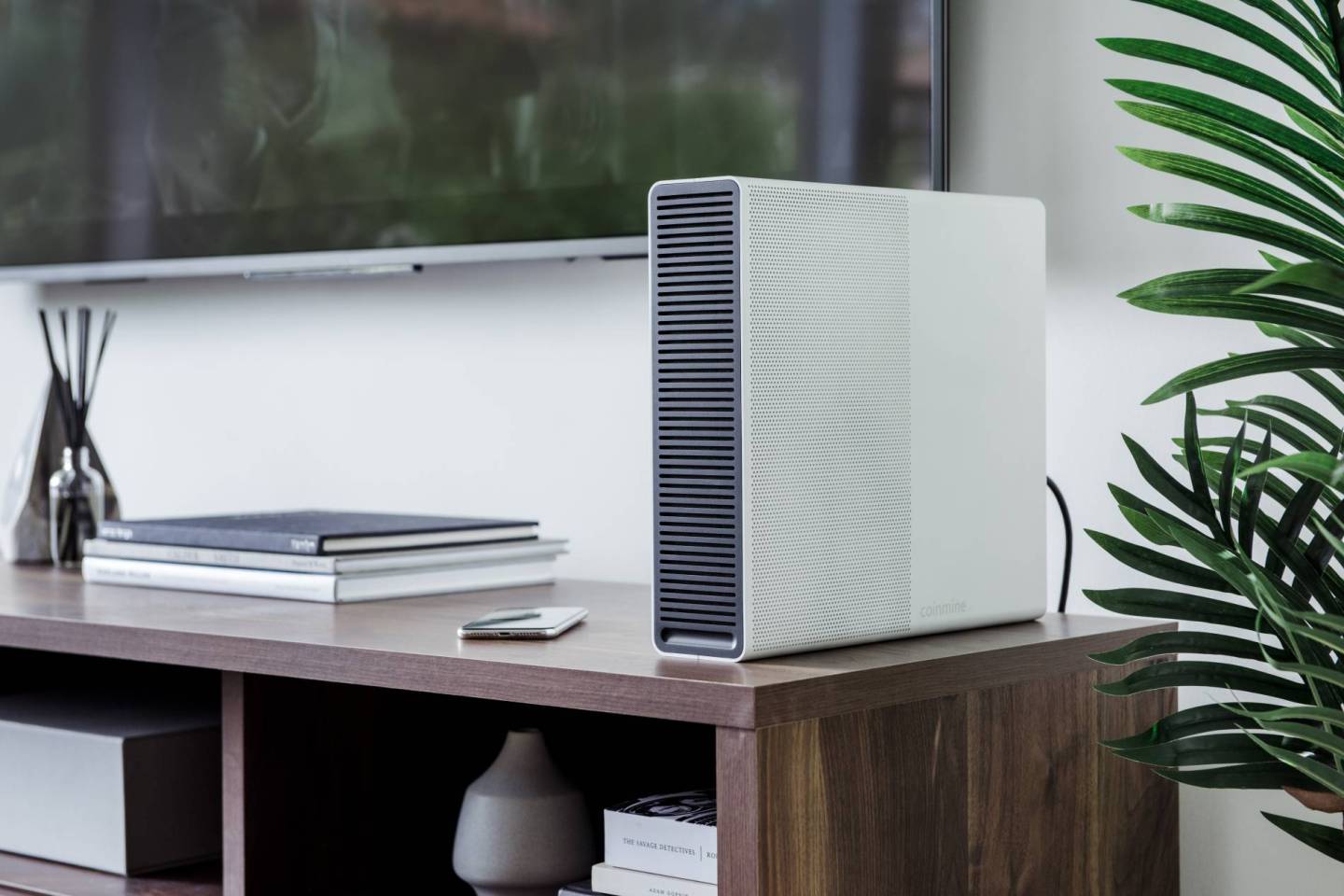 Until a few years ago, you could mine Bitcoin with a laptop. Today, the process is more like running a factory: it requires specialized chips, hot and noisy mining rigs, and enough electricity to power a small city.

That’s why the arrival of a device called the Coinmine One is intriguing. The makers of the device (pictured above), which sells for $799, are pitching it as an easy-to-use home mining system you can control with an app.

The device uses ordinary GPU chips and isn’t powerful enough to mine Bitcoin. It can, though, currently mine four other cryptocurrencies—Ethereum, Ethereum Classic, Monero and Zcash—and has its own operating system, which will let owners add other currencies in the future.

Coinmine is the brainchild of Farb Nivi, an entrepreneur who says he has built computers since he was a kid, and industrial designer Justin Lambert, who helped a line of smartwatches called Pebble. The company has raised $2 million from prominent names in the cryptocurrency realm, including Coinbase Ventures, Arrington Ventures, and Coinbase chief technology officer Balaji Srinivasan.

I wanted to see the mining device in action so Nivi came by Fortune’s office to provide a demo. He pulled a Coinmine One out of a large backpack, plugged it into a wall and displayed an app that shows how much cryptocurrency it is mining.

The most notable features of the Coinmine are that it’s quiet and that it uses no more electricity than a vacuum cleaner, according to Nivi. It also has an attractive design with an Apple-style aesthetic, which is a marked contrast from the clunky devices normally used for mining.

For aspiring miners, the device also requires a degree of trust: an owner must rely on Coinmine to collect the currency the device mines. The company stores the output in wallets on its corporate servers, taking a 5% cut.

According to Nivi, the appeal of the device is two-fold. First, it provides a hassle free way to earn cryptocurrency. Secondly, he predicts people will use it to get in on the ground-floor of new currencies that arrive on the market since they will be able to mine them directly rather than buying them.

“With automatic updates, MineOS also gives access to new crypto networks like Bitcoin Lightning, Grin, Dfinity, and Filecoin. This feature ensures users do not miss out on powering the next important crypto network,” said the company in a release.

Nivi also thinks more cryptocurrencies will follow the path of Monero, which now updates its protocol so as to thwart those who try to mine it with specialized ASIC chips. Such chips, which are today essential for mining Bitcoin, are single purpose and able to mine far more efficiently than general purpose GPU chips.

So who will buy the device? Nivi says it will appeal to cryptocurrency enthusiasts who want to partake of new projects. Meanwhile, Srinivasan says they also represent a money-making opportunity.

“It’s a pretty cool idea to be able to plug a device into the wall that makes money for you while you sleep. As a purely economic proposition, you’d have to balance the cost of power and the hardware device itself with the cost of the coin or token that you’d be mining. There are so many assets now that there is probably always an arbitrage somewhere,” he said.