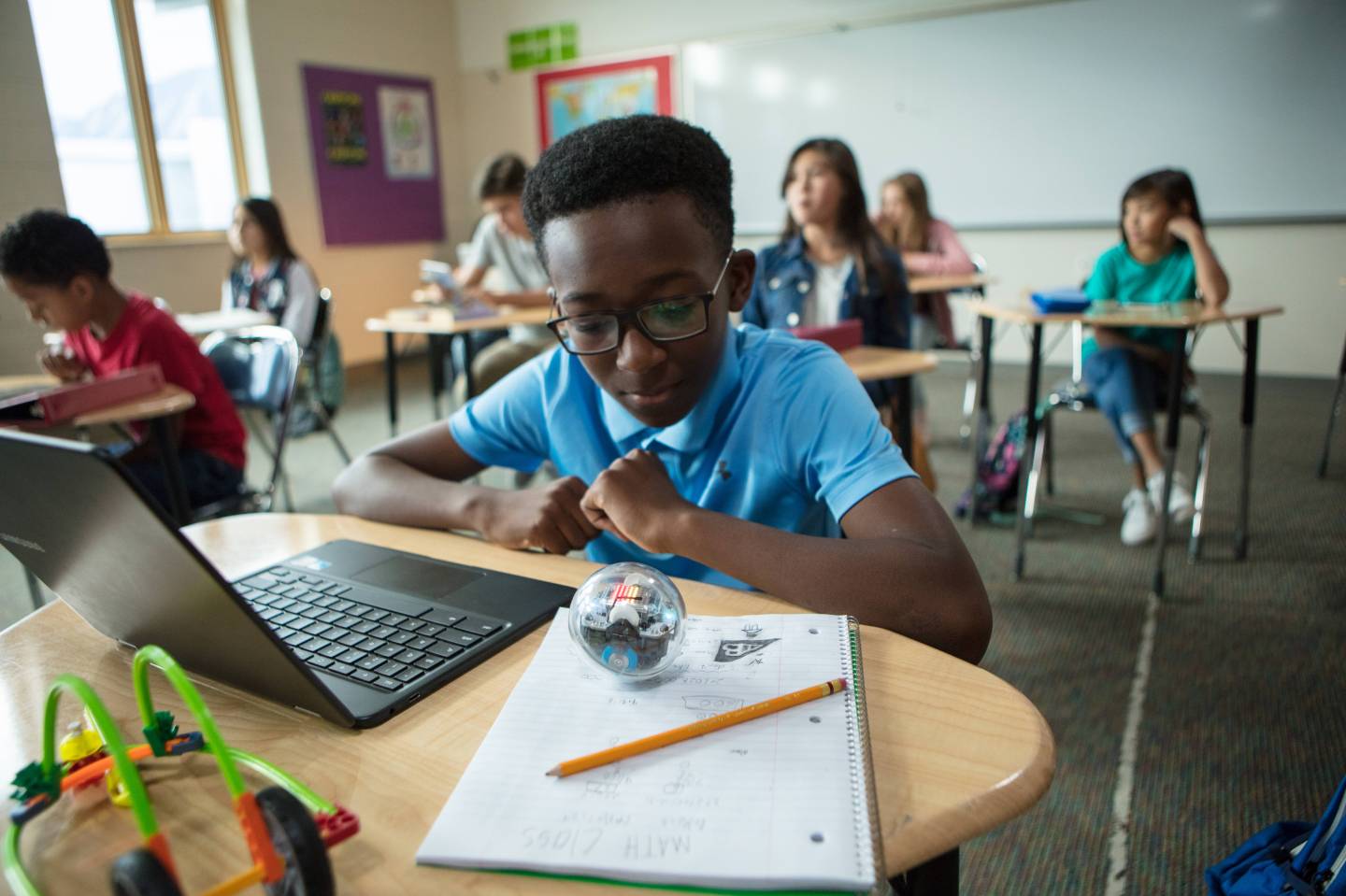 You might know Sphero because of its BB-8 droid toy, but its new Bolt robot ball will be a hit with STEM students.
Photo by Bryan Rowe; courtesy of Sphero

There’s been a great disturbance in the Force. For the first time in several years, the toy industry won’t have a Star Wars film to lift up the holiday shopping season. That means no revamped voice-changing Kylo Ren helmets. No updated Nerf Chewbacca Bowcasters. No Episode IX-linked Lego Millennium Falcons. And for Sphero, no new BB-8 app-enabled droids.

For most toy companies, losing a tentpole like Star Wars is enough to make their annual revenue roll off a cliff. But not Sphero, says CEO Paul Berberian, whose company has sold more than 4 million toy robots over the past eight years.

“Most people think it’s all Disney, but no—roughly half have been licensed products,” says Berberian. The other half of Sphero’s 4 million robots sold to date have all been originals products, he says. “The Sphero brand obviously got a huge boost from Disney, but our own products continue to sell incredibly well.”

Founded in 2010 under the name Orbotix, Sphero has been many things over the course of its eight-year run. The company began as a neat little toymaker, touting its app-controlled cue ball named Sphero. A rebranding and a couple products later, Sphero evolved into a maker of hackers’ playthings, with programmable goodies like SPRK (also known as “Spark”) that delighted the STEM set.

Then, after a stretch in the Disney Accelerator in 2014, Sphero turned toward branded toys like the popular BB-8 droid. A Spiderman voice-enabled doll, an animated Lightning McQueen car, and a fully-interactive R2-D2 later, Sphero has learned a thing or three about toys—what makes them work, what makes them sell—as well as robots. Since then, Sphero has spun off its non-rolling efforts into a new company called Misty Robotics.

But with the Skywalker saga taking 2018 off, Sphero is back to rolling wherever it pleases. And the reason that Sphero will have a life after Darth, says Berberian, is that along the way the company has been slowly, quietly building a STEM-focused business. Sphero’s efforts in this space began in 2012, when it poached one of Apple’s education executives and began building a hearty curriculum of projects itself.

“The nature of the game in education, unlike retail, is about staying power,” says Berberian. “Products have to be useful year-after-year-after-year.” So while typical consumers want to know what innovations are packed into the newest Sphero product, educational customers want to know that these robots (or classroom technology investments) will be useful and updated for years. That’s why while everyone was fawning over BB-8, Sphero was actually building an empire in the educational arena.

One of Sphero’s central tenets is that play can be a powerful teacher, a concept that’s really starting to resonate in the classroom, Berberian says. “There’s this huge emphasis in business on STEM and STEAM-based education,” he adds. “A lot of these subjects in school are boring, but when we put a robot or high-tech experience in there, it really infuses subjects that may not really engage every kid.”

Take, for example, learning the Pythagorean Theorem. On a white board, the topic couldn’t be duller, but when you put a robot ball on the floor and tell kids to program it to drive a triangle, all of a sudden, you’re bringing the topic to life. And students around the world are doing just that. “We have over 20,000 schools and 30,000 teachers and close to 2 million kids registered in our system and using it in their classroom,” says Berberian.

That leads to Sphero Bolt, the company’s latest, greatest robot. Chock-a-block with sensors, the $149 device is a code kid’s dream ball. The Android-, Chrome-, iOS-, MacOS-, and Windows-compatible rolling robot has Bluetooth and 360-degree infrared capabilities for robot-to-robot communication, ambient light sensors, a magnetometer (sort of like a compass), all packed into a translucent, polycarbonate shell.

But the biggest difference between Bolt and its predecessors is the full-color 8-by-8 LED matrix display sitting in the middle of the ball. Programmable through the Sphero Edu app, this mini-screen can do a lot, from displaying animations (which look cool when playing some real-world Pac-Man games) to displaying values like the amount of lumens Bolt’s light sensor is detecting.

Of course, Sphero is hoping schools will buy Bolts by the bunches—and their hopes aren’t entirely unfounded. According to Berberian, BB-8 isn’t necessarily the company’s best-selling product—its nearly $1,799 SPRK+ Power Pack is. A rolling suitcase teeming with robot balls, this STEM-class-in-a-box can charge Spheros on the fly, and is popular with science teachers and the math team alike. “Basically, if you’re a school and you get a grant for STEM, one of the must-have items is a suitcase full of Spheros,” says Berberian. (Coinciding with the Bolt’s release, Sphero is releasing an updated Bolt Powerpack for $2,499.)

Selling Spheros to schools by the dozen may seem like a far cry from peddling one of the holiday’s hardest-to-find toys (even if it was just last year), but it’s a new challenge that Berberian is embracing wholeheartedly. “While the licensed products were really fun to create and taught us a ton and elevated our brand, Star Wars was a unique moment in time,” he says. And so, now it’s time for Sphero (and its Bolt robots) to learn some new tricks—though the Force will be with them, always.