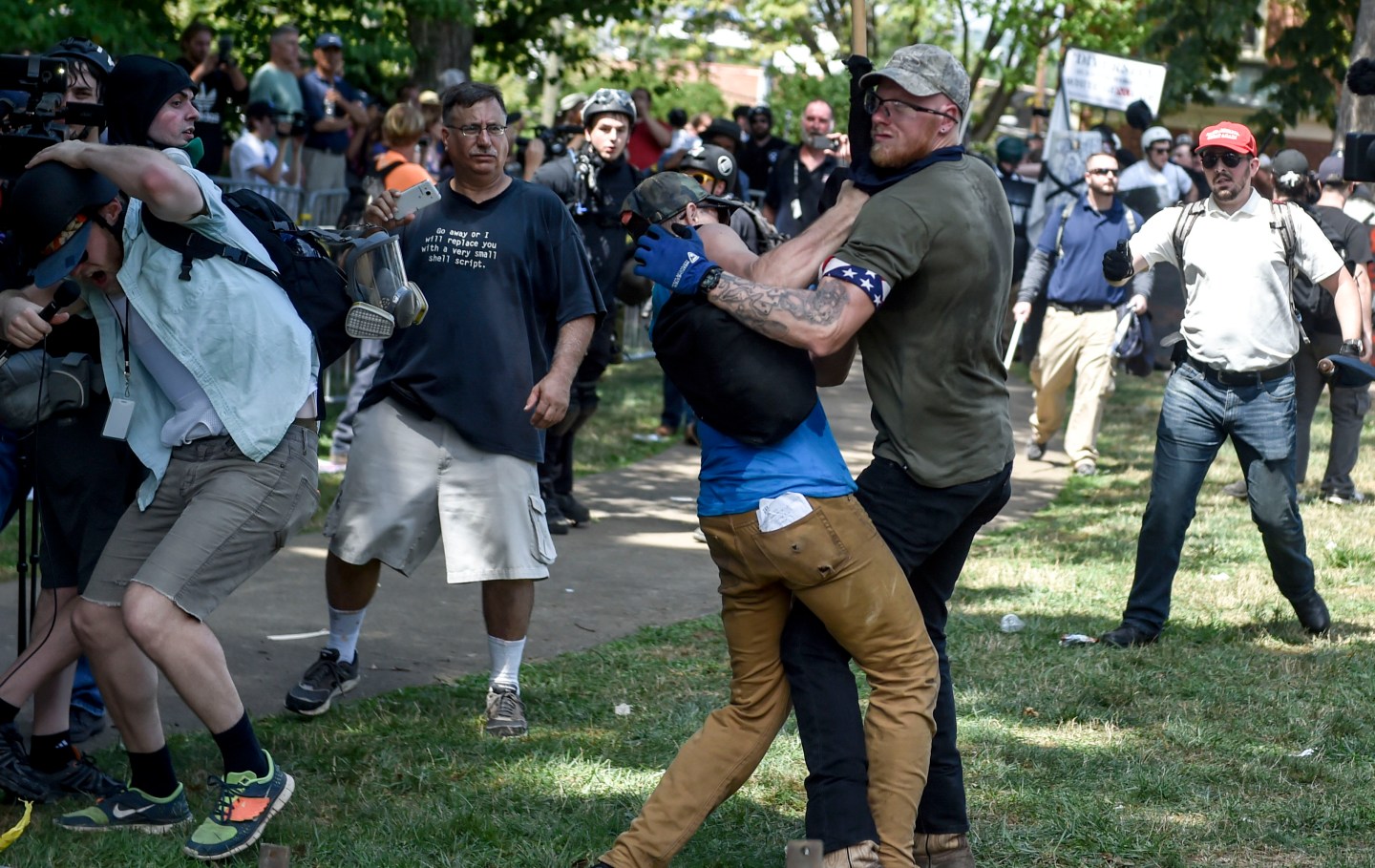 CHARLOTTESVILLE, VIRGINIA, UNITED STATES - 2017/08/12: A member of the white supremacist and a protester are seen fighting. White supremacists gathered at Emancipation Park in Charlottesville, Virginia for the Unite the Right Rally. Virginia's Governor McAuliffe declared a State of Emergency as violence erupted before the rally could begin between counter protesters and white supremacists around Emancipation Park. Later in the afternoon White supremacists James Alexander Fields Jr. drove his silver dodge charger into a crowd of counter protesters killing Heather Heyer and injuring multiple others. (Photo by Matthew Hatcher/SOPA Images/LightRocket via Getty Images)
Matthew Hatcher—SOPA Images/LightRocket via Getty Images

Washington is bracing for a white nationalist rally that law enforcement agencies will try to prevent from descending into a melee like the one in Charlottesville, Virginia, that cast a shadow over Donald Trump’s presidency a year ago.

Marking the anniversary on Saturday, Trump condemned “all types of racism and acts of violence,” a shift from his widely-criticized equivocation of 2017.

Permits for Sunday’s “Unite the Right 2” rally indicated that about 400 demonstrators are expected in Lafayette Square, a park adjacent to the White House. More than 1,500 counter-protesters plan to gather at various downtown locations, including in the same park.

In August 2017, white supremacist demonstrators and counterprotesters squared off in violent clashes in Charlottesville, site of the University of Virginia. The conflict culminated in the death of Heather Heyer, 32, when James Alex Fields Jr., whose social media accounts included posts espousing white supremacy, purposely drove his car into a crowd of counterprotesters.

Trump drew condemnation in the days that followed when he appeared to equivocate the actions of white supremacists and those that opposed them.

“I think there is blame on both sides,” Trump said during a press conference in the lobby of Trump Tower in New York. He added that the white nationalist protesters in Charlottesville included “some very fine people.”

Criticism came from within Trump’s administration, including from Gary Cohn, at the time the president’s economic adviser. Some Republican lawmakers also pushed back, although initial statements by House Speaker Paul Ryan and Senate Majority Leader Mitch McConnell didn’t mention Trump by name.

Trump’s remarks also led to a series of business leaders announcing they would exit a council providing assistance to the administration. The advisory group was then abolished.

The president is at his Bedminster, New Jersey, golf course, and is scheduled to return to Washington on Monday. “The riots in Charlottesville a year ago resulted in senseless death and division,” Trump said Saturday on Twitter. “We must come together as a nation.”

Preparations have been in the works for Sunday’s event for months between law local enforcement agencies, U.S. Park Police and the U.S. Secret Service.

Police plan to close more than a dozen streets in downtown Washington and cordon off broad sections of Lafayette Square to separate the opposing demonstrators, said Peter Newsham, chief of the Washington Metropolitan Police Department.

“We have seen in the past where these two groups have been in the same area at the same time, it leads to violent confrontations,” Newsham said at a press briefing Thursday.

“Our goal is to prevent that from occurring. Every police action that you will see on Sunday will be done with the ultimate goal of ensuring the safety of everyone that attends,” he said.

Police will enforce a complete ban on firearms in and around the demonstration areas on Sunday, including for those with local permits to carry concealed weapons, Newsham said. Organizers of the alt-right rally likewise warned attendees to not bring firearms or other weapons, including pepper spray, clubs, knives and shields.

Incendiary as it may be, by Washington standards Sunday’s gatherings will be tiny. The 2017 Women’s March, held the day after Trump’s inauguration, drew an estimated 500,000 to 1.5 million people. Events over the decades focused on civil rights, LGBT rights, abortion, ending the Vietnam War and other issues have drawn crowds well into the hundreds of thousands.

Jason Kessler, 34, organizer of both the Charlottesville rally and Sunday’s demonstration, calls himself a “white civil rights” activist and said his goal is to spark a conversation while keeping everyone safe.

Speaking by telephone on Friday, Kessler said he’s feeling a lot better about the safety precautions for the Washington rally.

“It couldn’t have possibly been worse than Charlottesville — they weren’t just incompetent, they were malicious,” Kessler said of the authorities in Virginia. “They wanted people to fight so they could deny us our First Amendment rights.”

Mark Lance, a philosophy professor at Georgetown University and an organizer of some of Sunday’s planned the counter-demonstrations, said Kessler’s call for “white civil rights” was meant to obscure the beliefs of those that rallied in Charlottesville.

“They marched chanting the slogans ‘Jews will not replace us’ and ‘blood and soil,’ a classic Nazi chant,” Lance said of the Virginia rally. “We know what they mean by ‘white people have rights.’ ”

The counter-demonstration organized by Lance’s Shut It Down D.C. coalition will feature minority, immigrant and other groups targeted by white nationalists, said Lance, “so that people can see overwhelmingly that these folks are unacceptable and are invaders in our town.”

“D.C. police deal with protests every week and more or less have unlimited resources. I certainly predict that they will be much more professional and much more even-handed and do much more to contribute to safety,” he said.

Sunday’s rally comes less than three months before midterm elections to determine whether Republicans maintain their majority in Congress. Democrats and independents are defending 25 seats in the Senate, compared to eight for Republicans, and need to win an additional net 23 seats to take over the House of Representatives.

The president’s approval rating remains high among Republican voters, leaving most members of his party in Congress loathe to publicly criticize him.

Any response from Trump to this year’s demonstrations could have consequences as Democrats look to harness outrage for electoral gains. Polls and recent primary races show Democrats outperforming expectations heading into the final months of the campaign.