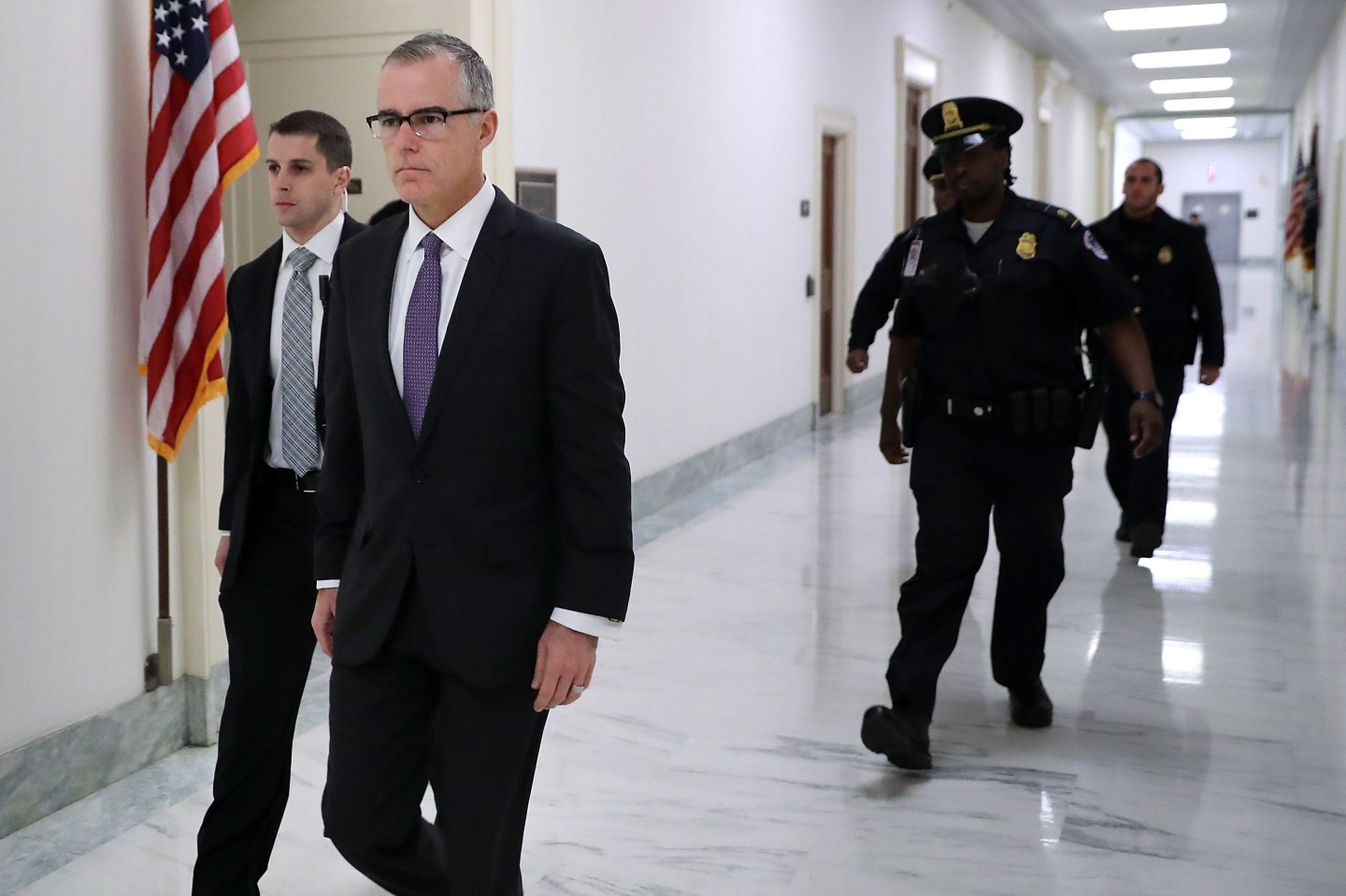 President Donald Trump said he might intervene to force the Federal Bureau of Investigation to turn over to a conservative watchdog group text messages sent by former Deputy Director Andrew McCabe.

“Why isn’t the FBI giving Andrew McCabe text messages to Judicial Watch or appropriate governmental authorities,” Trump tweeted from his New Jersey golf club, where he was spending a rainy morning. “FBI said they won’t give up even one (I may have to get involved, DO NOT DESTROY). What are they hiding?”

Washington-based Judicial Watch has filed a lawsuit seeking text messages and emails of McCabe relating to his wife, a pediatric emergency physician who ran unsuccessfully for the Virginia state Senate in 2015.

Conservative critics, including the president, have argued that because Jill McCabe accepted a campaign contribution from then-Virginia Governor Terry McAuliffe’s political action committee, McCabe should have recused himself from the investigation into Hillary Clinton’s use of a private email server. McAuliffe is a longtime friend of Bill and Hillary Clinton.

“McCabe wife took big campaign dollars from Hillary people,” Trump tweeted on Saturday. The president went on to ask if the FBI would “ever recover it’s once stellar reputation.”

“So many of the great men and women of the FBI have been hurt by these clowns and losers!” Trump said of McCabe, former FBI Director James Comey, and other former bureau officials.

The actions of the former deputy director have become a frequent hobbyhorse for Trump, who’s said he believes that the Justice Department’s decision not to prosecute Clinton — while continuing to investigate potential meddling between his campaign and Russia — is evidence of institutional bias.

“We’re fighting the FBI over text messages for the corrupt FBI official Andrew McCabe,” Fitton said. “The FBI doesn’t want to turn over one text message to us.”

The Justice Department initially denied the Freedom of Information Act request by arguing that the requested search parameters for McCabe’s communications, which included terms like “email,” “Democrat” and “campaign” — were too broad, according to a filing by Judicial Watch. The government also said text messages related to McCabe’s wife would be shielded by personal privacy protections.

Attorney General Jeff Sessions fired McCabe earlier this year, days before his scheduled retirement, following months of public criticism of the FBI official by the president. Sessions said he took the action on the recommendation of FBI investigators who argued McCabe had been dishonest with Comey about his role in an October 2016 Wall Street Journal article on an FBI investigation into the Clinton Foundation.

McCabe has said that he didn’t mislead anyone about his actions and that he had the authority to share information with the media.