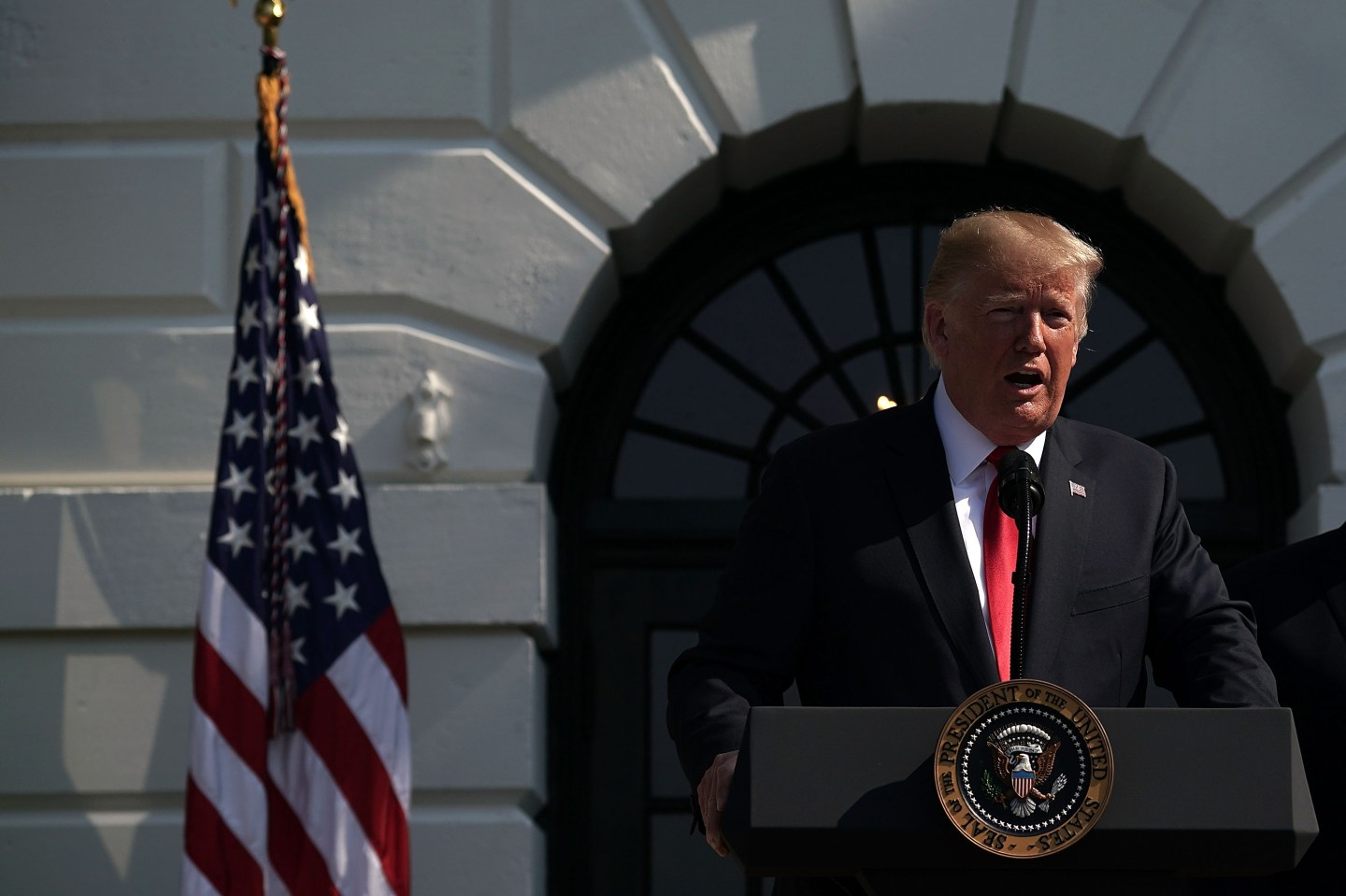 WASHINGTON, DC - JULY 27: U.S. President Donald Trump gives remarks on the economy at the South Lawn of the White House on July 27, 2018 in Washington, DC. The U.S. economy grew 4.1% in the second quarter, the fastest pace since 2014. (Photo by Alex Wong/Getty Images)
Alex Wong—Getty Images

Consumer spending propelled U.S. economic growth to a 4.1 percent pace in the second quarter, the fastest since 2014, letting President Donald Trump claim a win for his policies even though most analysts see the high as temporary.

The annualized rate of gains in gross domestic product was just shy of the 4.2 percent median forecast in a Bloomberg survey. It followed first-quarter growth of 2.2 percent that was revised from 2 percent, the Commerce Department reported Friday. Consumer spending grew 4 percent, more than estimated, while nonresidential business investment climbed at a 7.3 percent clip.

Illustrating the volatility of some elements of GDP, net exports contributed 1.06 percentage point to the pace of growth, the most since 2013, partly on a surge in soybean shipments ahead of retaliatory tariffs. Inventories subtracted 1 point, the most since 2014, also on a decline in soybean stocks as well as those of drugs and sundries and petroleum and related products.

Nevertheless, the scorecard gives Trump a chance to highlight the success of his policies, including the biggest tax overhaul since the Reagan era, which probably boosted consumer spending and business investment. Yet the risks from tariff wars and a fading effect from tax cuts are among reasons analysts see difficulty keeping the economy growing at such a robust pace.

Even so, Federal Reserve policy makers are expected to continue their gradual pace of interest-rate hikes aimed at keeping the economy from overheating, without moving so fast that they could choke off growth.

“I wouldn’t want to overstate the underlying strength in GDP growth based on Friday’s numbers,” Omair Sharif, senior U.S. economist at Societe Generale, said before the report. “There was a big boost from trade, but that’ll go away.” Going forward, “it’s highly unlikely we’ll get 4 percent growth, or even 3 percent on a sustained basis.”

Trump on Thursday was managing expectations for the release, saying the figures would be “terrific” even if growth might not be as high as 5.3 percent. “If it has a 4 in front of it, we’re happy,” while 3.7 percent or above would be OK, he said in Granite City, Illinois.

Economists’ forecasts for second-quarter GDP, the value of all goods and services produced in the nation, ranged from 3 percent to 5 percent. The GDP estimate is the first of three for the quarter, with the other releases scheduled for August and September when more information becomes available.

With the Friday data, the Commerce Department also released comprehensive GDP revisions going back decades. They showed a higher household-saving rate than previously reported, as well as faster growth in the first quarter of recent years, though the overall narrative of the economy’s performance over the last decade wasn’t much different.

The revisions also showed the economy surpassed $20 trillion in nominal dollars in the first quarter.

Even with the relatively strong pace of growth last quarter, most economists expect expansion to settle back to near its long-run rate, and some have flagged the risk of a recession in two years. While polls and historical trends suggest Democrats are primed for significant gains in November’s midterm elections, voters give Trump high marks for the economy.

Compared with a year earlier, second-quarter GDP rose 2.8 percent, just shy of the 3 percent mark, which was last reached in 2015. The Trump administration’s official goal is for sustained GDP growth of 3 percent, which would well exceed the average 2.2 percent pace during this expansion and the Fed’s longer-run expectation of 1.8 percent.

One measure that economists look at for a better sense of underlying demand showed strength. Final sales to private domestic purchasers — which exclude trade, inventories and government outlays — grew at a 4.3 percent pace, the second- fastest since 2014.

The pace of expansion in consumer spending, which accounts for about 70 percent of the economy, exceeded projections for 3 percent and contributed 2.69 percentage points to growth. Purchases of new autos were a major factor, along with spending on health care, housing and utilities and food services and accommodations. That followed a downwardly revised 0.5 percent pace of consumption growth in the prior three months.

In addition to lower taxes, consumers’ purchasing power is benefiting from steady hiring, an unemployment rate that’s near the lowest since 1969, improving finances, relatively low borrowing costs and contained inflation.

The growth in nonresidential business investment contributed almost 1 percentage point to growth though the 7.3 percent pace was slower than the first quarter’s 11.5 percent. Spending on structures advanced 13.3 percent following a 13.9 percent gain in the prior period, while equipment investment cooled to 3.9 percent and intellectual property spending slowed to 8.2 percent.

Housing remained a weak spot in the economy amid signs that the sector is poised for its broadest slowdown in years. Residential investment contracted at a 1.1 percent rate, the fourth decline in five quarters. The drag on overall growth, though, was negligible.

The contribution from net exports reflected a 9.3 percent gain in shipments abroad and a 0.5 percent increase in imports. In addition to soybeans, exports were boosted by petroleum and related products.

The data showed consumers’ wallets grew at a slower pace. After- tax incomes adjusted for inflation increased at a 2.6 percent annual pace, after 4.4 percent in the prior quarter. The saving rate fell to 6.8 percent from 7.2 percent, which was revised from 3.3 percent as part of the comprehensive update.

First-quarter gross domestic income, adjusted for inflation, was revised to a 3.9 percent gain from a previously reported 3.6 percent.

Price data in the report indicated that inflation was in line with the Fed’s goal. Excluding food and energy, the central bank’s preferred price index rose at a 2 percent annualized rate last quarter, following 2.2 percent in the first three months of the year.