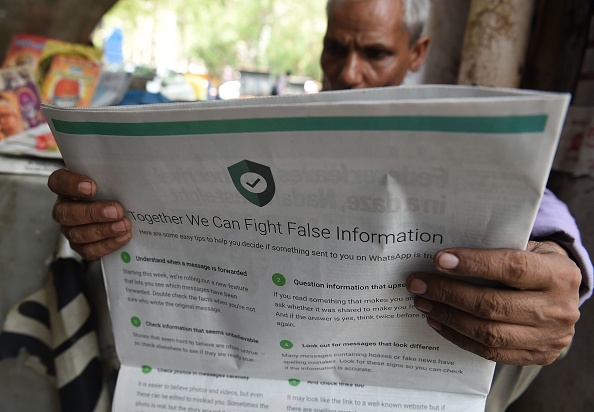 A few years ago, WhatsApp started letting people forward messages to multiple groups at once. Now, facing serious problems with the spread of misinformation, the Facebook-owned operation is placing new limits on the function.

WhatsApp is particularly having problems in India at the moment, with people using the service to spread rumors about suspected child abductors. This trend has led to a spate of mob lynchings, and the Indian government warned WhatsApp on Thursday that it may sue the company if it doesn’t get a hold on its fake news problem.

Also on Thursday, WhatsApp said in a blogpost that it was “launching a test to limit forwarding that will apply to everyone using WhatsApp.” According to TechCrunch, the move will limit forwarding to 20 groups at once, and no more.

India, however, gets a tighter limit—messages there can only be forwarded to five chats simultaneously, under the test. What’s more, WhatsApp users in the country will no longer see a quick forward button next to media messages.

This is a big deal, as India is WhatsApp’s biggest market, with 200 million users—the service’s global total is 1.5 billion monthly active users.

“We believe that these changes—which we’ll continue to evaluate—will help keep WhatsApp the way it was designed to be: a private messaging app,” WhatsApp said in its blog post.

WhatsApp added another feature earlier this month that is also intended to combat the fake news problem—it introduced a new label on text and media messages that indicates when the sender of the message had previously been forwarded it, rather than the message being original.