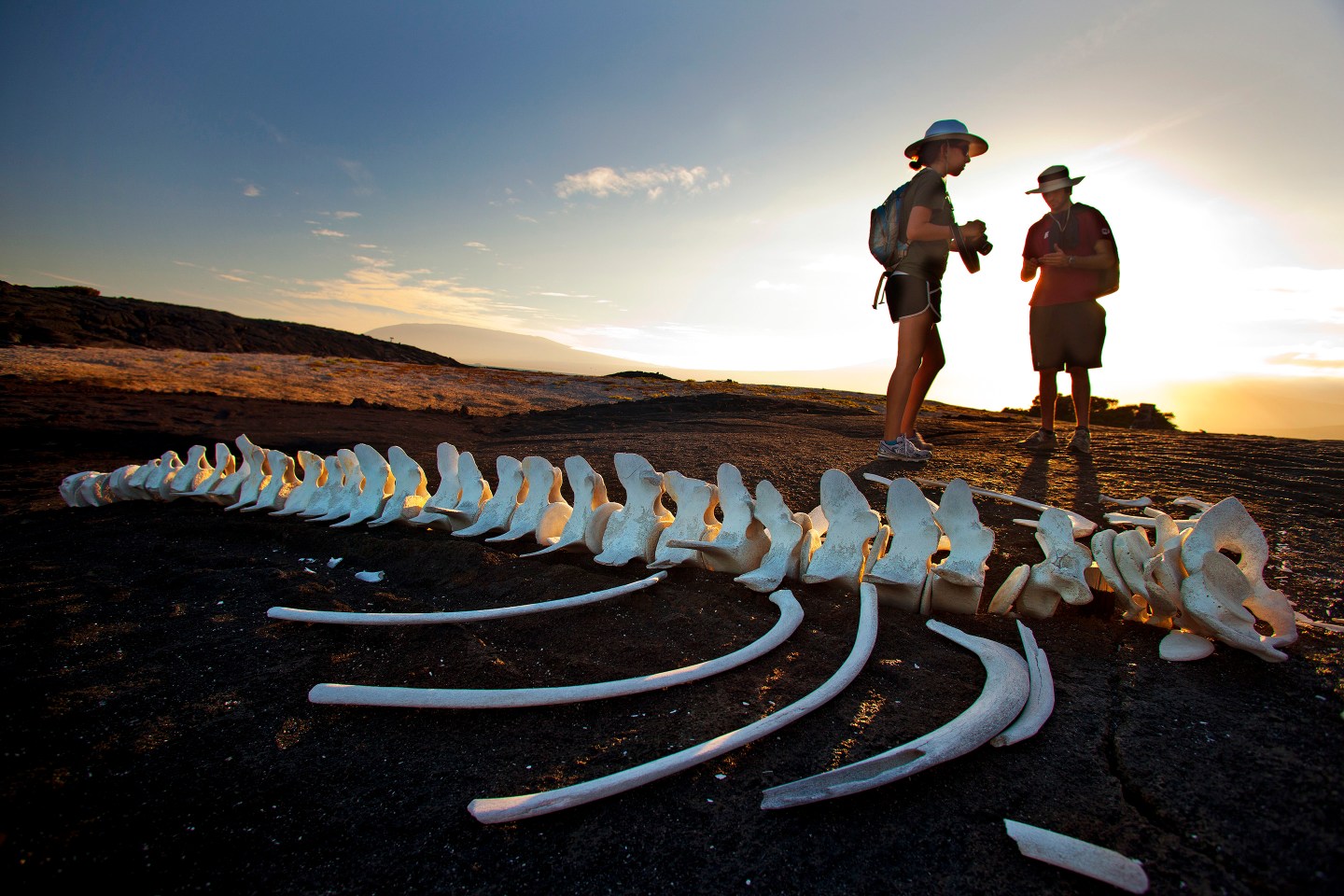 ARRIVING ON FERNANDINA ISLAND, the youngest (at less than 1 million years old) and westernmost in the Galápagos, is like discovering a land that time forgot. Once you disembark from your inflatable panga at Punta Espinosa, its sole landing site, and make your way through the dense mangrove forest that fringes the coastline, you’re greeted by a colony of hundreds of charcoal-colored marine iguanas lounging atop one another and sneezing out salt water in a spirited chorus.

La Cumbre volcano, one of the world’s most active with six eruptions in the past 50 years, dominates the landscape, its rippled lava fields extending in every direction. In its shadow, sea lions splash in the shallows, their distinctive barks intermingled with the crashing waves, as scarlet Sally Lightfoot crabs scuttle along the ebony shoreline and Galápagos hawks survey the scene from above. No foreign species have ever invaded Fernandina—human visitors aside—making it one of the world’s most pristine ecosystems.

When it comes to far-flung escapes, few rival the Galápagos. Located in the Pacific Ocean some 600 miles off the coast of mainland Ecuador, the archipelago of 20 volcanic islands (and dozens more islets) remains an unspoiled utopia despite hosting more than 200,000 annual visitors. Home to a slew of species found nowhere else on earth—the giant Galápagos tortoise, the Galápagos finch (13 unique species in total), and the Galápagos penguin (the world’s second-smallest), to name a few—the islands endure as a beacon of the conservation movement nearly 160 years after the publication of Charles Darwin’s seminal treatise on evolution by natural selection, On the Origin of Species, put them on the proverbial map.

They’re also an exhilarating option for an active and educational adventure. Darwin once said, “A man who dares to waste one hour of time has not discovered the value of life,” which could well be the mantra of a Galápagos vacation. Whether you’re summiting the Mars-like terrain of Bartolomé Island—home to obelisk-shaped Pinnacle Rock, a Galápagos landmark—strolling the blinding white sands of Santa Cruz Island’s Bachas Beach, a prime nesting site for green sea turtles, or kayaking the coves of Isabela Island perusing penguins and brown pelicans, you’re largely in motion from dawn until cocktail hour (minus a leisurely lunch). If you’ve been neglecting your workouts, you’ll get back into your groove here.

Or if it’s a sense of wonder that’s lacking from your daily routine, the Galápagos will replenish your reserves. Meander along the trails near Urbina Bay on Isabela Island (the largest at 82 miles long) and you’re likely to encounter at least a handful of giant Galápagos tortoises, many nearly a century old, as they mosey by. Snorkel to the bottom of Isabela’s pristine Tagus Cove in search of cobalt sea stars and white-tipped reef sharks alongside Galápagos cormorants (the world’s largest and only flightless cormorant) as they deftly dive for their lunch before rocketing back to the surface. And be sure to spend a couple of late-afternoon hours on the beach at Española Island’s Gardner Bay, perhaps the archipelago’s most dazzling stretch of sand, where dozens of tawny sea lions loll at the crystalline water’s edge, turning their whiskered faces upward, utterly unfazed, as you pass.

EXPLORING THIS TROVE of ecological treasures by live-aboard boat, vs. from a hotel on one of the larger islands, is essential: Since these ships move primarily by night, you wake each day in a new locale ready to jump right into the day’s itinerary, instead of frittering away valuable waking hours in transit. Smaller yachts also enjoy access to landing sites unavailable to larger cruise ships.

Like many extraordinary environments, the Galápagos face a litany of threats to their fragile existence. Though the 50,000-square-mile Galápagos Marine Reserve was designated in 1998 to protect the waters surrounding the islands, illegal fishing is rampant. Last year alone, more than 30 vessels, one of which contained tens of thousands of sharks and other fish, were captured within its bounds. The resulting imbalance in the marine ecosystem is already impacting the iconic blue-footed booby, whose population has decreased in recent years.

The risk of introduced species, which grows in step with increased tourist arrivals, also looms large. Presently, an invasive parasitic fly threatens to render the endemic mangrove finch—of which only an estimated 100 remain—extinct. The Charles Darwin Foundation, a scientific research nonprofit dedicated to preserving the Galápagos, and the Galápagos National Park Directorate continue to work together to protect the archipelago: Recent successes include the ongoing repopulation of giant tortoises on the islands of Pinta, Floreana, and Santa Fé. To learn more about these groundbreaking initiatives, visit darwinfoundation.org.

What to book
Quasar Expeditions, a family-owned company founded in 1986, hosted Fortune. It operates two small ships that each run seven-night expedition cruises in the Galápagos. The M/V Evolution, which was entirely refurbished last year, sleeps 32, while the charming M/Y Grace—­a wedding gift to Grace Kelly and Prince Rainier from Aristotle Onassis in its former life—accommodates 18. Both yachts are available for charter. quasarex.com

Getting to the archipelago
There are multiple daily departures to the Galápagos from Quito and Guayaquil on mainland Ecuador. American Airlines, United, and Avianca, among others, fly regularly from the U.S. to both cities.

The night before
For a restful, refined stay before your Galápagos expedition, Casa Gangotena, a stunning converted mansion, is an unparalleled choice in the historic center of Quito, which was named the first Unesco World Heritage site in 1978. The boutique hotel, which melds neoclassical and Art Deco elements to exceptional effect, overlooks the famous Plaza San Francisco and the city’s surrounding volcanoes. casagangotena.com

A version of this article appears in the July 1, 2018 issue of Fortune with the headline “Ecuador’s Enchanted Isles.”