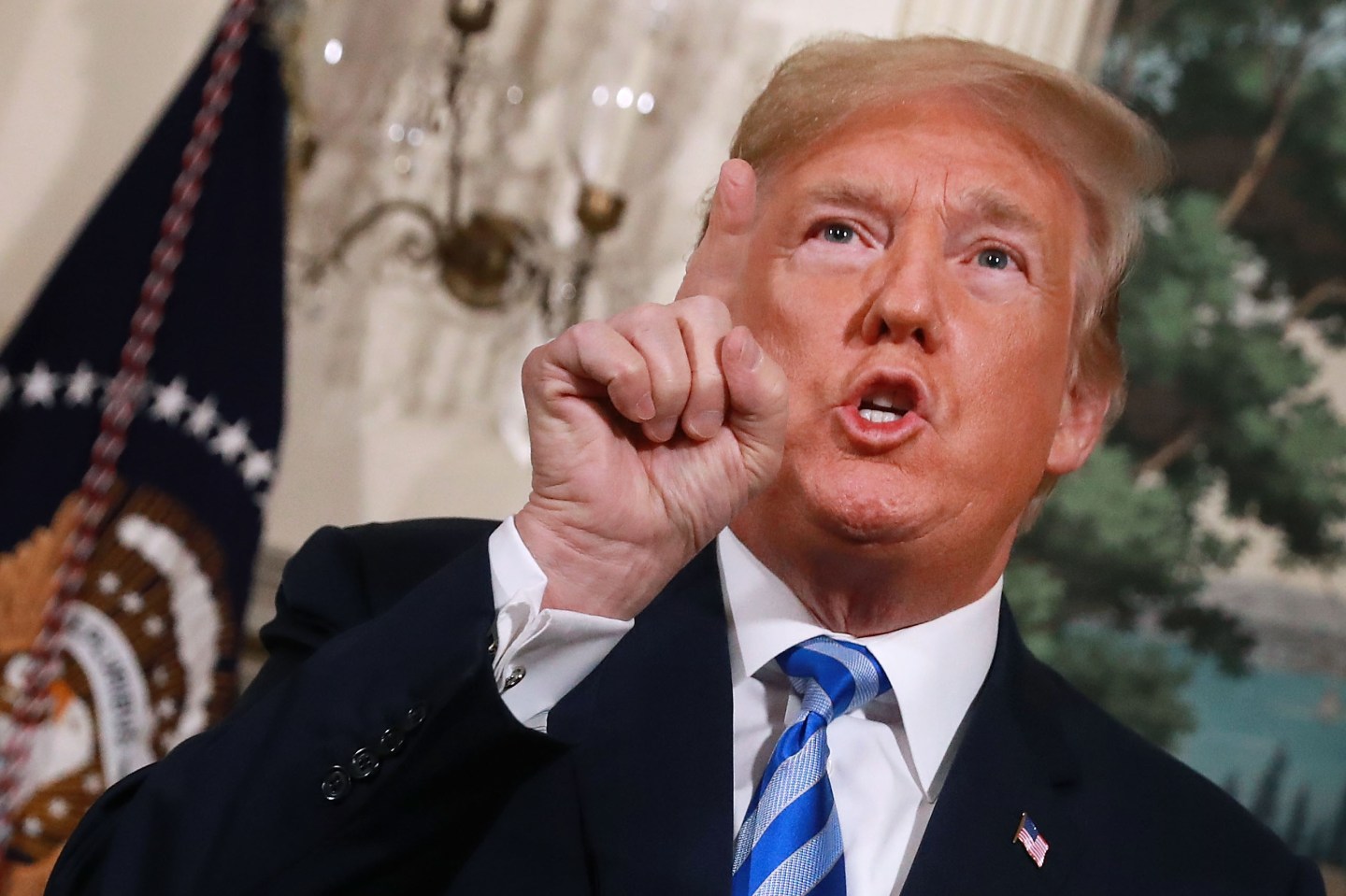 President Donald Trump announces his decision to withdraw the United States from the 2015 Iran nuclear deal at the White House on May 8, 2018 in Washington, DC
Chip Somodevilla—Getty Images

President Donald Trump said he’ll “demand” an investigation into possible infiltration of his campaign for political purposes by the Obama administration or others.

“I hereby demand, and will do so officially tomorrow, that the Department of Justice look into whether or not the FBI/DOJ infiltrated or surveilled the Trump Campaign for Political Purposes – and if any such demands or requests were made by people within the Obama Administration!” Trump said on Twitter.

In an interview on Fox News Channel, Nunes said he and Republican colleagues have yet to determine whether there was such an informant, because the Justice Department and FBI continue to withhold documents from them.

But the California lawmaker pointed to what he said were “leaks” behind news reports in recent days that the Federal Bureau of Investigation had used an “informant” to get information regarding the Trump campaign early in its counterintelligence investigation of possible ties to Russia.

“You can’t do this to political campaigns,” Nunes said.

I hereby demand, and will do so officially tomorrow, that the Department of Justice look into whether or not the FBI/DOJ infiltrated or surveilled the Trump Campaign for Political Purposes – and if any such demands or requests were made by people within the Obama Administration!

This week marked the one-year anniversary of Robert Mueller’s appointment as special counsel to lead a probe into election meddling by Russia. Trump and some Republicans are increasingly pressing the argument that the inquiry should be shut down because it was irreversibly tainted by improper actions well before Mueller was appointed.

The president and his allies on Capitol Hill have been trying to undercut the probe by exposing the role of a confidential source who helped the FBI. Democrats, including Senator Mark Warner, as well as the Justice Department and intelligence leaders, have warned that identifying the source may put lives in danger.

Warner of Virginia, top Democrat on the Senate Intelligence Committee, said Sunday that exposing the source would be illegal.

“If any individual, elected official or otherwise, knowingly reveals a classified piece of information about an FBI source, you are breaking the law and should be fully prosecuted,” he said on CNN’s “State of the Union.” Warner said he’d “not seen any evidence” that the FBI planted an informant in Trump’s campaign, as the president has claimed.

Representative Adam Schiff, the top Democrat on the House Intelligence Committee, said revealing information about the alleged FBI informant was “a dramatic and new and destructive low” for Republicans in Congress.

Schiff said he’s “confident” the FBI acted appropriately in its investigation. “Everything I have seen, it would have been negligent for the FBI not to take steps to protect the country in the midst of the information it was receiving,” he said on NBC’s “Meet the Press.”

The president this week retweeted a comment by a Fox News anchor that “apparently the DOJ put a Spy in the Trump campaign,” adding, “Really bad stuff!”

The New York Times reported May 19 that the FBI used an existing informant to covertly approach several Trump campaign associates. It does not report that the FBI embedded the informant.

Trump’s attorney, former New York Mayor Rudy Giuliani, is now looking to combine the prospect of the president sitting down for an interview with Mueller with knowing whether the alleged informant had any “incriminating information” on Trump associates.

“What we intend to do is premise it on, ‘If you want an interview, we need an answer to this,’ ” Giuliani said in an interview with the Wall Street Journal published on Sunday.

Also this week, Giuliani said Mueller has indicated that he’s willing to narrow the scope of an interview with the president. That would include foregoing questions about payments by Trump’s personal lawyer to adult film star Stephanie Clifford.