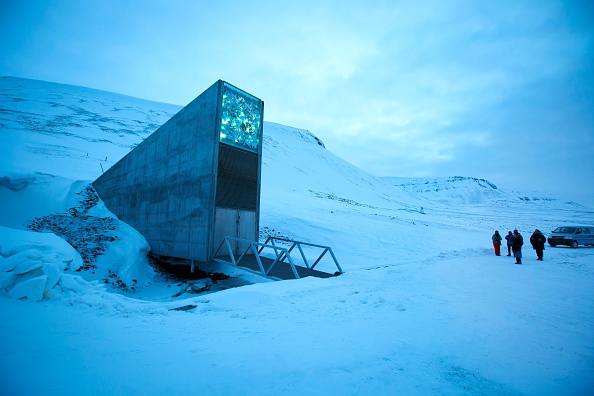 There’s one day left to enter Martha Stewart’s contest for the chance to accompany her, and a cadre of other food experts and activists, to the frigid edges of civilization.

Friday is the deadline to enter to win a tour with Stewart to the Svalbard Global Seed Vault, which built into the rock on an island archipelago midway between continental Norway and the North Pole. With its a concrete entrance jutting out over a frozen moat, the structure itself resembles a New Age Noah’s Ark with Scandinavian design sensibilities. Often called the “Doomsday Vault,” it’s designed to house the seeds of millions of plant varieties, a backup of earth’s crops. So, should a crisis like global warming drive an agricultural variety extinction, scientists at vault will be able to repopulate the earth with that crop, and potentially stave off the end of the human race.

Donations for the Prizeo contest will go to benefit the Crop Trust, a German organization dedicated to food security. The Trust, which operates the vault, is hoping that the high-profile outing will boost its endowment and allow the seed bank to become a self-sustaining entity long into the future.

So what, exactly, does a trip to an Arctic island with Martha Stewart look like?

According to a draft of the trip itinerary, the delegation will depart from Oslo for the roughly four-hour journey north to the Longyearbyen airport, the world’s northernmost with publicly available flights. Once there, the luxury accommodations will brace the travelers for February’s subzero temperatures and the archipelago’s almost complete absence of sunlight in the winter months. On the first day, the group is slated to take in a few tours and presentations before sitting down for a four-course dinner—with wine pairing, of course—in a restaurant housed in a former mining company warehouse. It may be the Arctic, but it’s still Martha Stewart. (There’s a five-course dinner the following day.)

But the trip isn’t just about seed preservation and gourmet food. Participants will also have the option to partake in “Arctic dogsledding to Tempelfjorden in combination with lunch,” with the caveat that lunch “will be served in a tented camp and two guests will be sharing one sled during the dog sledding.”

And for those who want to see the northern lights and don’t mind the extreme weather, “there will be 20 touring snowmobiles” at the ready every night near the hotel, “if participants wish to make a polar night safaris.”

The highlight, of course, will be a tour of the vault itself. A few years ago, it made its first contribution to the global food supply chain—resupplying a facility that had been damaged by war in Syria. As the rising risks of climate change threaten the planet’s food supply, the next withdrawals may come sooner than expected. “Their sole mission is to ensure the mission of food security,” Stewart said of the Vault as she launched her fundraising campaign. “What’s cooler than that?”