How Bank of America Can Catch J.P. Morgan 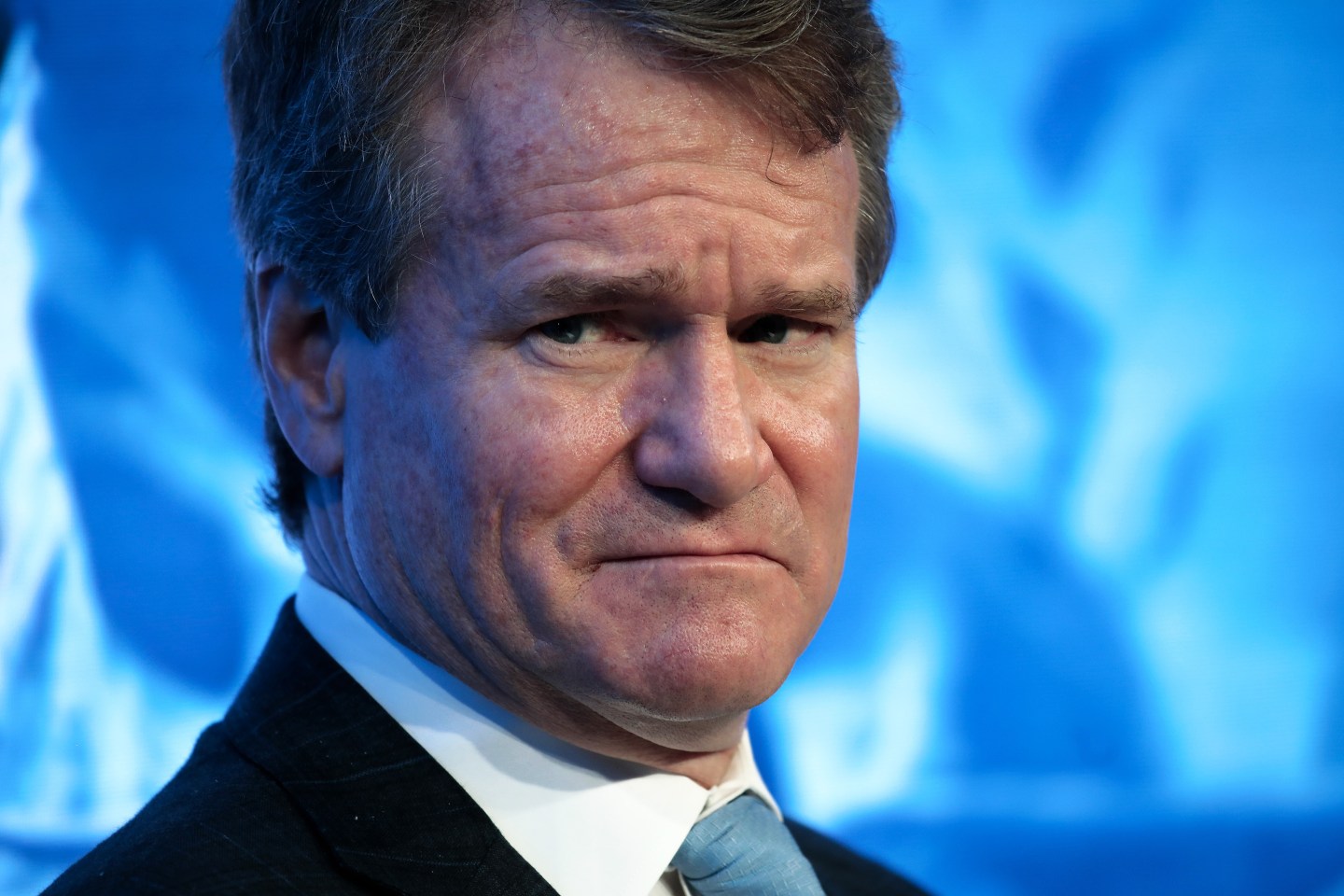 Around this time three years ago, Bank of America’s Brian Moynihan unveiled the final numbers for a dreadful year. The beleaguered CEO announced that B of A had posted just $4.8 billion in net earnings for 2014, around one-fifth the $20-billion-plus bounty at J.P. Morgan and Wells Fargo, and two-thirds of the profits for much smaller rival Citigroup. The gigantic burden from penalties and losses on bad mortgages, and the billions spent annually on servicing that stricken portfolio, spread doubt whether B of A could ever regain its footing.

Its lagging stock price and valuation reflected those deep misgivings. In early 2015, B of A’s stock was mired around $15, and its $160 billion market cap lagged that of Wall Street darling Wells by almost $100 billion.

What’s happened since marks an astounding reversal of form for B of A, and a major reshuffling of the hierarchy of America’s biggest banks. On January 17, Moynihan announced that B of A earned $21 billion in 2017 (excluding a $2.9 charge due to the new federal tax law). B of A bested Wells ($18.85 billion, excluding a large tax gain), not to mention Citi ($15 billion, excluding a big tax loss). And B of A’s shares have more than doubled to $32 since the dark days of early 2015, lifting its market cap to $331, dwarfing Citi ($207 billion) and surpassing Wells, which has been famously plagued by costly scandals in its consumer business.

Despite its impressive comeback, B of A still trails the champ, J.P. Morgan, whose 2017 (pre-tax charge) profits of $26.9 billion beat B of A by 22%. Jamie Dimon’s franchise also leads in market cap at $394 billion, maintaining a slightly lower, 19% edge.

So today, a possibility arises that would have seemed unthinkable in early 2015: Can the plodder, B of A, overtake mighty J.P. Morgan?

Indeed, if B of A can remain on its current trajectory—and Moynihan never deviates from his low-risk, highly focused course—B of A can at least match J.P. Morgan’s immense profitability. Both J.P. Morgan and B of A run gigantic consumer banking franchises. On the corporate side, J.P. is bigger in sales and trading for corporate customers, and B of A leads in brokerage through its Merrill franchise. For B of A, the engine in raising returns to J.P Morgan levels will be expanding that bedrock, increasingly golden branch banking business.

Moynihan believes that old fashioned banking, consisting of gathering low-cost deposits and lending that money back to loyal customers, is one of the world’s great businesses. And he’s proving it. Here are the reasons why B of A has the potential to run shoulder-to-shoulder with J.P. Morgan.

MOYNIHAN IS A MASTER OF WHAT COUNTS MOST FOR LIFTING PROFITS: OPERATING LEVERAGE

Operating leverage is achieved by consistently growing revenues faster than costs, so that earnings outrace the top line. It’s a formula for putting profits on steroids. In effect, Moynihan saved B of A in the tough times by slashing costs to more than compensate for flagging revenues. From Q1 of 2015 to Q1 of 2016, B of A’s revenues were declining 3% on a year-over-year basis. But Moynihan managed to lower expenses far more in that period, by around 15% a year. Then, in Q2 of 2016, the strategy evolved from damage control to major progress. Revenues started growing once again, and Moynihan set the goal of not just freezing, but lowering cost every quarter, promising to reach a “run rate” of $53 billion in non-interest expenses by 2018.

He’s made it—and 2017 is a case study in the magic of operating leverage. For the year, revenues rose $3.7 billion or around 5% to $87.4 billion. Expenses declined 1% or $340 million to $54.7 billion. Since revenues are a bigger number than expenses, the combination of a modestly growing top line and flat expenses stoked profits, which rose from $17.0 to $21 billion, a 17% increase.

On the earnings conference call, Moynihan pledged to keep the cost line flat at $53 billion, meaning the he expects total expenses to fall by a point or two a year adjusted for inflation.

B OF A BOASTS AMERICA’S BIGGEST CONSUMER FRANCHISE

B of A’s biggest business is its coast-to-coast branch banking network that provides checking and savings accounts to tens of millions of customers, and accounts for almost 40% of total revenues. In 2017, the consumer side grew briskly as B of A attracted sundry new customers, adding 8% in deposits and 9% in loans and leases. Revenue rose by $2.8 billion or 8.8% to $34.5 billion. But once again, operating leverage swelled profits far more. Virtually flat expenses coupled with 9% revenue growth, raised net earnings by 14%, from $7.2 to $8.2 billion, making consumer by far B of A’s biggest money spinner.

This year is a primer on how B of A can get to J.P. Morgan territory: Operating leverage is driving double-digit profit growth on revenues advancing at half that rate.

Warren Buffett, B of A’s largest shareholder, has frequently lauded the value of its “big, sticky deposits.” B of A boasts $665 billion in deposits that it can use to fund mortgage, auto, and credit card loans. It pays on average .04% rate on those deposits Factoring in the costs of overhead and operating its vast branch network, the total cost of those $665 million in deposits is 1.61%. Lending for mortgages, home equity and auto loans, and credit card loans carry average rates of around 10%, giving B of A a margin of 8.74%. And defaults are hovering near their lowest levels in decades.

B of A and its rivals have experienced long periods of immense profitability in the past, buoyed by great credit quality, and a thriving economy. But as Moynihan likes to point out, they’ve generally squandered the huge gains in the flush times by chasing low-quality, low-margin business, and making excessively risky loans. Moynihan swears that B of A has learned from the past, and will lend mainly to the highly reliable customers it knows well and trusts.

So far, Moynihan has followed his plan like a postage stamp affixed to an envelope. Two years ago, B of A set a goal of 12% return on tangible equity, and 1% return on assets. It’s already hit 11% on the first goal, and gotten to over 90% of its goal on the second. Reaching 12% alone would lift B of A’s net earnings to almost $23 billion, $4 billion short of J.P. Morgan. But his buoyant optimism on the Q4 conference call suggests that Moynihan is just getting started. Moynihan stated that by dropping B of A’s corporate rate from around 29% into the low 20s, the new tax law alone will push B of A well past those benchmarks.

In effect, Moynihan is still playing catch up with Dimon, While J.P. Morgan’s avoided the pitfalls of the mortgage boom and kept investing for the future, B of A shrank to survive. Now, Moynihan too is in expansion mode, and once again, his mastery of operating leverage turns a program of modest, prudent growth into a powerful profit engine.

Moynihan also claimed that he’s determined to power well past what once seemed like stretch targets. He’s already taken B of A from a dog to contender. Now, he’s got a shot at making it the best.