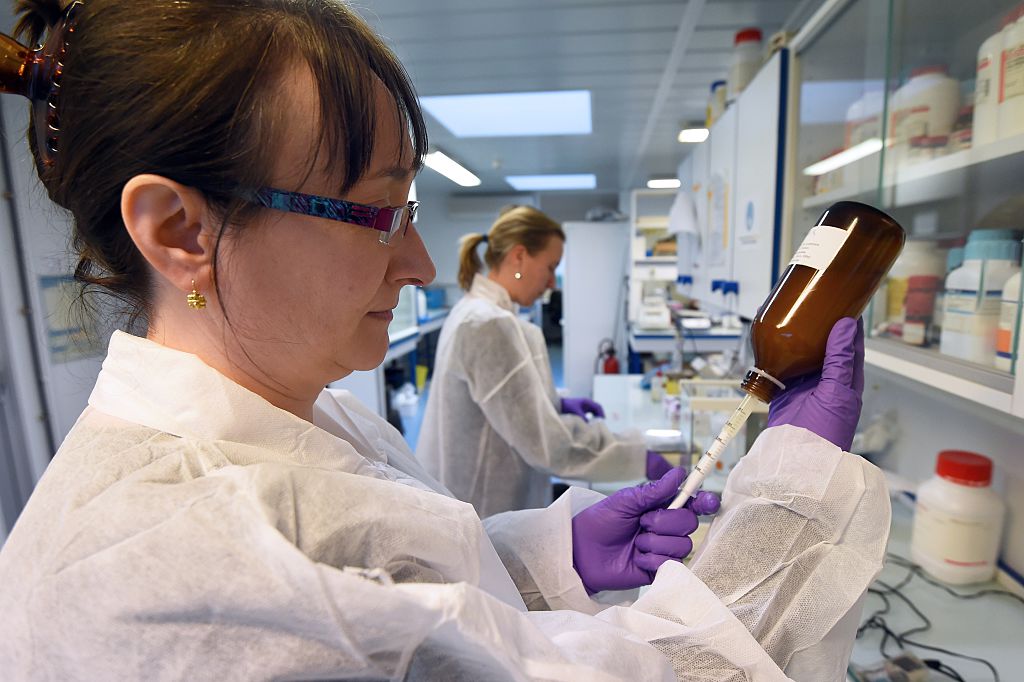 TO GO WITH AFP STORY BY THIBAULT LE GRAND (L-R) Marie-Reine Schneider, head of the pharmaceutical development and Caroline Gouarne, researcher in cell biology, use a solution of a molecule called olesoxime to run a test on the survival of motor neurons, on February 3, 2015 in the office of French biotechnology company Trophos, in Marseille, southern France. Trophos, was recently bought by Swiss pharmaceutical group Roche to gain access to an experimental drug to treat a debilitating genetic neuromuscular disease. AFP PHOTO / ANNE-CHRISTINE POUJOULAT (Photo credit should read ANNE-CHRISTINE POUJOULAT/AFP/Getty Images)
Anne-Christine Poujoulat—AFP/Getty Images

Adding Roche’s (RHHVF) immunotherapy Tecentriq to older drugs doubled the percentage of lung cancer patients who survived a year without their disease advancing, an outcome some experts labeled unprecedented.

Thirty-seven percent of patients in a closely watched clinical trial who received Tecentriq, Avastin and chemotherapy reached the one-year mark without their cancer progressing (PFS), according to data released on Thursday.

For patients getting only Avastin and chemotherapy, that fell to 18%.

Read: Gene Therapy Is Revolutionary Science That Can Cure Blindness. Is It Worth $1 Million a Pop?

Thursday’s release of specific numbers at a European Society for Medical Oncology meeting in Geneva could further fan investor optimism that the Swiss drugmaker is gaining on rivals Merck & Co (MERCK-CO-INC) and Bristol-Myers Squibb (BMY).

“This is very, very promising,” Dr Solange Peters, the head of Medical Oncology at the Centre Hospitalier Universitaire Vaudois in Lausanne, Switzerland, said on the latest results.

“Doubling PFS (progression-free survival) at one year is something we have not seen with any targeted therapy in unselected patients to date.”

In a second significant trial result, Roche also released positive interim data from its recently approved hemophilia drug Hemlibra dosed every four weeks, saying the results were consistent with previous studies of the medicine dosed once a week or every two weeks.

Roche said it would submit the results from both studies to regulatory authorities around the world.

The Swiss company’s shares rose more than 1% in Zurich.

Read: This Drug Is A Dual Threat Against Heart Disease and Cancer

Analysts said the “highly significant” risk reduction from the study will help cement Tecentriq as a strong competitor to Merck’s Keytruda.

“We see the Impower 150 outcomes sufficient for Roche to submit a robust data package to the health authorities and very likely obtain a marketing authorization in the U.S. by mid-2018,” wrote Bruno Bulic, a Baader Helvea analyst with a “buy” rating on Roche shares.

Roche is counting on $150,000-per-year Tecentriq to help replace revenue from its $20 billion-per-year trio of Avastin, Herceptin and Rituxan whose patents have expired or will shortly, exposing them to cheaper competition.

According to estimates collected by Reuters, Tecentriq annual sales are seen topping $4.6 billion by 2023.

Lung cancer is easily the biggest oncology market, with about 220,000 people in the United States due to be diagnosed this year and 155,000 seen dying from the disease often caused by smoking.

In Roche’s 1,202-patient study, patients getting Roche’s immunotherapy survived an average of 8.3 months without their disease getting worse, only modestly better than the PFS of 6.8 months for those getting chemotherapy and Avastin.

Still, analysts focused more on the 38% reduction in risk of disease progression or death in the Tecentriq group, well within the range they have said would signify a robust result.

Read: Could a Vaccine Prevent High Cholesterol and Heart Disease?

For a set of patients who expressed a specific biomarker called “Teff” that Roche is exploring to help identify people who may respond best, the results were more robust, with a 49% risk reduction and PFS at 11.3 months for the Tecentriq group versus 6.8 months.

Roche, which said serious adverse events were seen in 25.4% of patients getting the Tecentriq combination compared with 19.3% in the Avastin-chemo group, is still awaiting Impower 150’s overall survival data in the first half of 2018.

Tecentriq is already approved in bladder cancer treatment and for lung cancer patients who have failed chemotherapy.