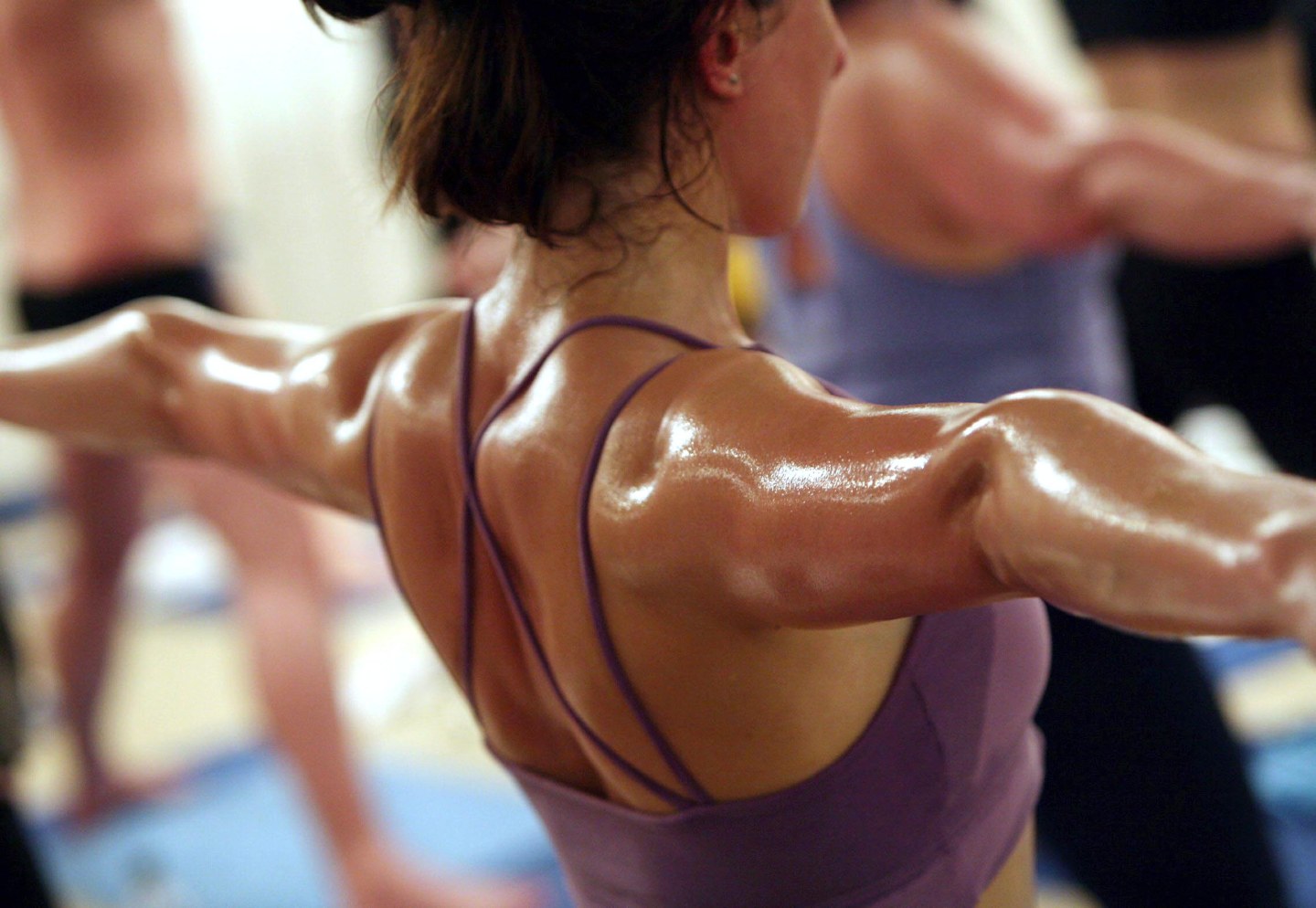 LONDON - MARCH 13: Students practice the unique Bikram Yoga at the City Studio, on March 13, 2007 in London, England. The Bikram Yoga, also known as Hot Yoga, is a style of yoga developed by Bikram Choudhury and is done in a room heated to 105?F (40.5?C), this helps stretching, prevents injury and makes the body sweat which aids detoxification. The class normally involves two breathing exercises and 26 postures in a 90 minute class. (Photo by Matt Cardy/Getty Images)
Matt Cardy—Getty Images

A lawyer for Bikram Choudhury Yoga Inc said on Thursday he is aiming to salvage the so-called hot yoga studio after millions of dollars in legal judgments and numerous allegations of sexual misconduct against its fugitive millionaire founder.

Bikram Choudhury built a worldwide following with classes of 26 yoga postures in rooms heated to 105 degrees Fahrenheit (40.6 C). The method was embraced by celebrities including George Clooney, Beyonce and Madonna, according to a Bikram Yoga blog post several years ago.

His Simi Valley, California-based company filed for Chapter 11 protection on Nov. 9, citing $16.7 million in claims by women who are owed money for court judgments awarded against the yogaguru from lawsuits dating back to 2013.

Choudhury has been accused of sexual assault by some of his yoga practitioners, students, instructors and teacher trainees.

A warrant for his arrest was issued in May but his whereabouts are unknown.

The chain has 49 studios across the U.S. and 37 abroad, and conducts yoga seminars, lectures and workshops across the world, according to its website.

“My focus is to keep the business alive and try to restructure it so there’s some value and a recovery by these victims and holders of claims against the company,” Bikram Yoga‘s bankruptcy lawyer, Martin Brill, told Reuters.

“The company really has not been operating as it should in the last couple of years as a result of these allegations and the fact that Mr. Choudhury is no longer in the country,” he said.

Bikram Yoga and special litigation lawyers did not return requests for comment on Thursday on the sexual misconduct allegations. Brill represents Bikram Yoga in the Chapter 11 bankruptcy but does not represent Choudhury.

Brill’s comments followed a request by the U.S. Trustee, a Justice Department bankruptcy watchdog, that the Bikram Yoga Chapter 11 case be dismissed or converted to a Chapter 7 liquidation due to a failure to file required documents.

Brill said they are working on getting all of the requested items to the U.S. Trustee.

If the case were dismissed, it would lift the stay on lawsuits against the yoga studio.

Bikram Yoga appointed turnaround specialist John Bryan as chief restructuring officer on Nov. 13 with the aim of reviewing strategic options for the company and rebuilding the Bikram brand.

In its bankruptcy petition, the yoga studio said its liabilities were worth up to $50 million and that its biggest creditors are women who are owed money for court judgments awarded against Choudhury. It listed assets of up to $1 million, suggesting creditors may not be paid in full.

A meeting of creditors is scheduled for Dec. 14 at the U.S. Bankruptcy Court in Santa Barbara, but Brill said he planned to request it be postponed until Bikram Yoga files detailed financial disclosures in early January.

A hearing on the U.S. Trustee’s request is scheduled for Jan. 10.