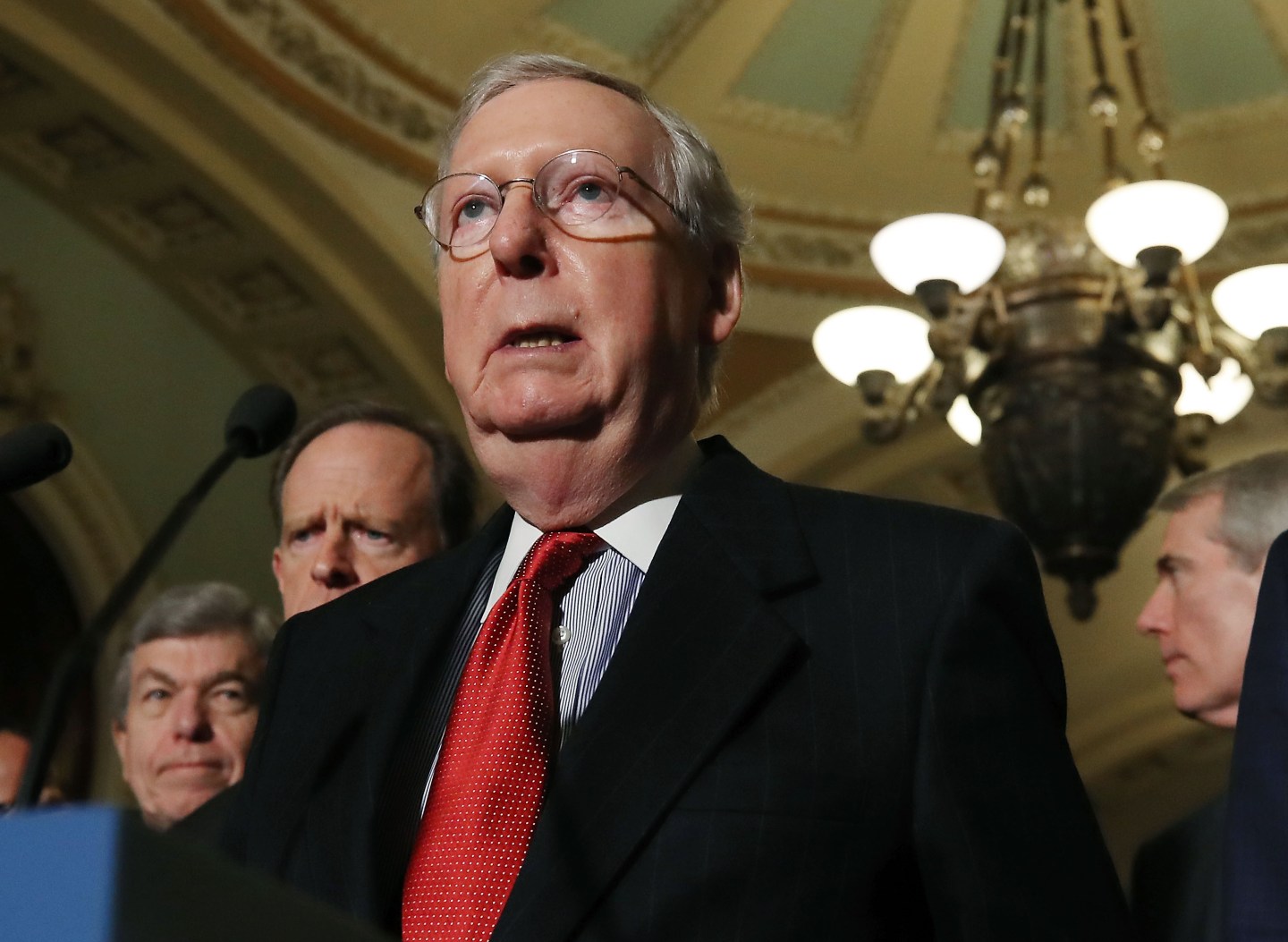 U.S. Senate Republicans on Tuesday linked repealing a key component of Obamacare to their ambitious tax-cut plan, raising new political risks and uncertainties for the tax measure that financial markets have been monitoring closely for months.

In comments that infuriated Democrats and left some senior Republicans unsure what comes next, Senate Republican leader Mitch McConnell told reporters: “We’re optimistic that inserting the individual mandate repeal would be helpful and that’s obviously the view of the Senate Finance Committee Republicans as well.”

The finance panel, which had been in session for two days, abruptly adjourned on Tuesday as Democrats slammed the Republicans‘ handling of their tax proposals, for which formal legislative language has still not been unveiled.

Ron Wyden, the committee’s top Democrat, demanded more time for Democrats to discuss the issue “because we were never told that healthcare was going to be part of it and this just flew in literally out of nowhere in the last 20 minutes.”

Tying Obamacare to the tax program introduces new risks for the Republicans and for President Donald Trump. Together, they have yet to score a major legislative win since Trump took power in January, even with control of Congress and the White House.

The president, who has struggled in his relations with Congress, suggested in a tweet on Monday that the mandate repeal should be added to the tax plan, following up on a similar Nov. 3 tweet.

No final decision on such a move was made at the Senate Republicans‘ weekly luncheon, Senator Susan Collins told reporters afterward. She played a key role in July’s collapse of a years-long push by fellow Republicans to gut Obamacare, former Democratic President Barack Obama’s signature healthcare law, formally known as the Affordable Care Act.

“I personally think that it complicates tax reform to put the repeal of the individual mandate in there,” Collins said.

Asked if she would back the tax bill if a mandate repeal were added, she said: “I’m going to wait and see.”

Senator John McCain, who was also central to his party’s failed Obamacare repeal earlier this year, was non-committal on putting the mandate repeal in the tax plan, saying: “I want to see the whole bill before I decide.”

The Senate and House of Representatives are developing separate tax-cut packages they plan to reconcile eventually and send to Trump’s desk for enactment into law, an outcome Republicansare eager to achieve so they can face U.S. voters next year with at least one major legislative achievement.

House Speaker Paul Ryan, asked why the repeal of the Obamacare mandate was not in the House version of the tax proposal, told Fox News on Tuesday: “We didn’t want to complicate tax reform, make it harder than it otherwise would be.”

The House had already agreed to eliminate the mandate in a healthcare bill it passed in May, he noted, adding: “We want to see the Senate go first and see if they can get that done and then we’ll discuss whether or not it’s included at the end.”

The Trump administration strongly supports the House version of the tax legislation, saying its passage would be “an important first step in achieving comprehensive tax reform,” the White House said in a statement on Tuesday.

A Crucial Element of Obamacare

The individual mandate requires Americans to have health insurance or pay a penalty to Washington, a provision that Republicans have long opposed as government overreach.

But the mandate plays a critical role in Obamacare by requiring young, healthy people, who might otherwise go without coverage, to purchase insurance and help offset the costs of covering sicker and older Americans.

Underscoring the devastating consequences for Obamacare if the mandate were repealed, the nonpartisan Congressional Budget Office said last week that such a change would increase the number of Americans without health insurance by 13 million by 2027.

The CBO added that mandate repeal would raise the average insurance policy premiums in the Obamacare marketplaces by about 10% annually over the next decade.

Repealing the mandate would also lower the federal deficit by $338 billion over the same time period, the CBO said, a finding that several Republican senators said influenced the move.

Eliminating the individual mandate would lower the number of Americans with health insurance, meaning the federal government would spend less on subsidizing coverage for lower- and middle-income people, making that money available to pay for tax cuts.

Neither the Senate nor the House tax plans now includes repealing the mandate. But both plan would add about $1.5 trillion over 10 years to the federal deficit and the national debt, which now exceeds $20 trillion.

Congressional Republicans hope to pass tax legislation by the end of the year and are moving fast, despite uncertainties.

They hold only a razor-thin 52-48 majority in the Senate. If Democrats remain united in opposition,Republicans could afford to lose no more than two senators from within their own ranks and still secure passage of tax legislation.

Democrats have dismissed the Republican plans as deficit-expanding giveaways to corporations and the wealthy.

Representative Lloyd Doggett, a senior member of the House tax committee, said in a statement that the House tax bill was “just a way to curry favor with Washington special interests – awarding tax windfalls to large multinational corporations and the fortunate few that sit way atop the economic ladder.”