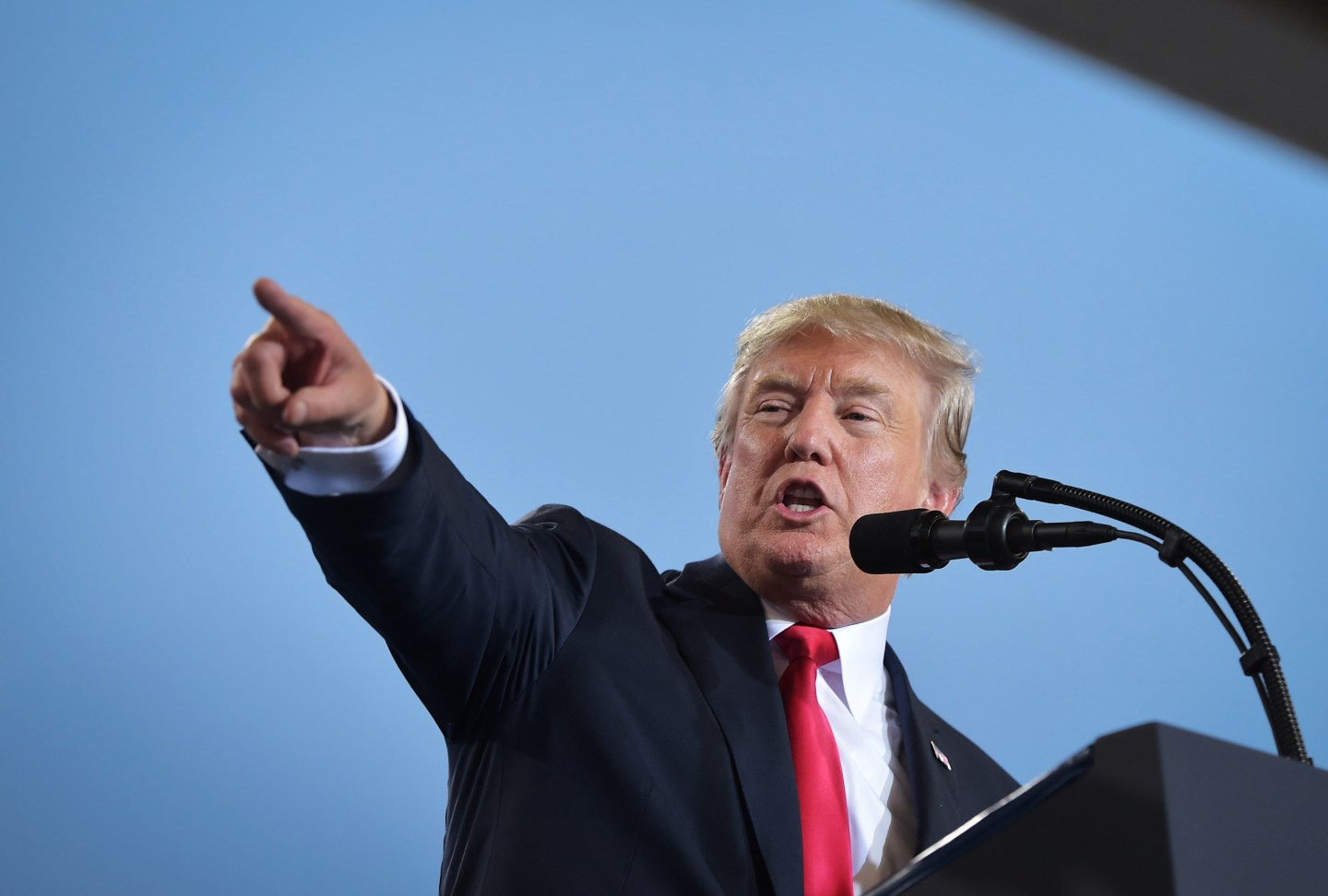 U.S. President Donald Trump suggested challenging licenses for NBC and other broadcast news networks following reports by NBC News that his secretary of state had called him a “moron” after a discussion of the U.S. nuclear arsenal.

“With all of the Fake News coming out of NBC and the Networks, at what point is it appropriate to challenge their License? Bad for country!” Trump, a Republican, wrote in a post on Twitter on Wednesday.

Trump and his supporters have repeatedly used the term “fake news” to cast doubt on media reports critical of his administration, often without providing any evidence to support their case that the reports were untrue.

Trump kept up his criticism of the media in an appearance with Canadian Prime Minister Justin Trudeau, saying: “It is frankly disgusting the press is able to write whatever it wants to write.”

In a tweet late on Wednesday, Trump said: “Network news has become so partisan, distorted and fake that licenses must be challenged and, if appropriate, revoked. Not fair to public!”

Any move to challenge media companies’ licenses, however, would likely face significant hurdles.

The Federal Communications Commission, an independent federal agency, does not license broadcast networks, but issues them to individual broadcast stations that are renewed on a staggered basis for eight-year periods.

A Comcast spokeswoman referred questions to NBC, which did not immediately respond.

A spokesman for FCC Chairman Ajit Pai did not immediately comment.

“It is contrary to this fundamental right for any government official to threaten the revocation of an FCC license simply because of a disagreement with the reporting of a journalist,” Smith said in a statement.

Senator Ed Markey wrote Pai on Wednesday asking him to “withstand any urges from President Trump to harm the news media and infringe upon the First Amendment,” a reference to the U.S. Constitution’s free speech and press freedom guarantee.

Democratic U.S. Representative Frank Pallone said Trump “seemed to threaten broadcasters’ licenses only because he disagreed with their reporting. This threat alone could intimidate the press and lead to skewed and unfair reporting.”

FCC Commissioner Jessica Rosenworcel responded to Trump by tweeting a link to an FCC fact sheet. “Not how it works,” she said on Twitter.

When reviewing licenses the FCC must determine if a renewal is in the public interest, according to an agency fact sheet on its website.

The FCC said in the fact sheet it expects “station licensees to be aware of the important problems and issues facing their local communities and to foster public understanding by presenting programming that relates to those local issues.”

The agency does not issue similar licenses for cable networks such as CNN and MSNBC, or regulate internet news or other websites.

The FCC has said the First Amendment “expressly prohibits the commission from censoring broadcast matter” and that its role “in overseeing program content is very limited.”

In the early 1970s, then-President Richard Nixon and his top aides discussed using the FCC’s license renewal process as a way of punishing the Washington Post for its coverage of the Watergate burglary that ultimately brought down his presidency.

NBC News has reported on tensions between Trump and Secretary of State Rex Tillerson, and has said Trump sought a dramatic increase in the U.S. nuclear arsenal during a meeting with national security advisers in July. NBC reported Tillerson made his “moron” comment after that meeting.

Trump on Saturday also suggested he should get “equal time” because of what he described as late-night television hosts’ “anti-Trump” material.

The FCC’s equal time rules apply in limited cases to air time for political candidates and not to criticism of elected leaders.

Trump may have been referring to the “Fairness Doctrine” that was designed to ensure broadcasters present opposing viewpoints about public issues. Republican President Ronald Reagan‘s administration eliminated it in 1987.