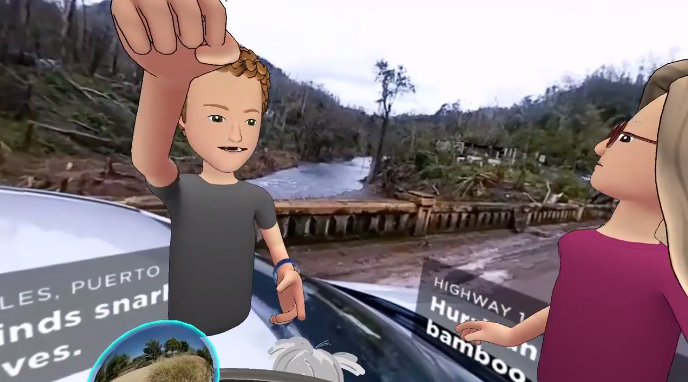 The Facebook CEO conducted a brief, live 360-video broadcast in which his likeness and that of Facebook’s head of social VR Rachel Franklin promoted the company’s upcoming Oculus Rift developer conference later this week while also talking about the company’s humanitarian efforts.

The two Facebook (FB) executives appeared as animated avatars superimposed on several real-life locations including Facebook’s headquarters, the moon, and amid the devastation on storm-ravished Puerto Rico. Both of the executives were demonstrating Facebook’s Spaces virtual reality app in which people can chit-chat, play games, and interact with each other in digital worlds.

After mentioning the Oculus event atop Facebook’s office, Zuckerberg and Franklin transported themselves into a recent NPR-produced 360-video that showed widespread damage caused by Hurricane Maria in September.

Speaking as a cartoonish version of himself, Zuckerberg showed viewers some of the damage caused by the recent powerful storms, mentioning, “One of the things that’s really magical about virtual reality is you can get the feeling that you’re really in a place.”

“We’re looking around, and it feels like we’re really here in Puerto Rico,” Zuckerberg said.

Zuckerberg also discussed Facebook’s $1.5 million donation to organizations doing hurricane relief like the World Food Program as well as it sending a “connectivity team” to the island to help restore telecommunication services.

He also said that Facebook used satellite imagery to create so-called “population maps” that the Red Cross can use to see heavily populated areas and more quickly determine who needs help.