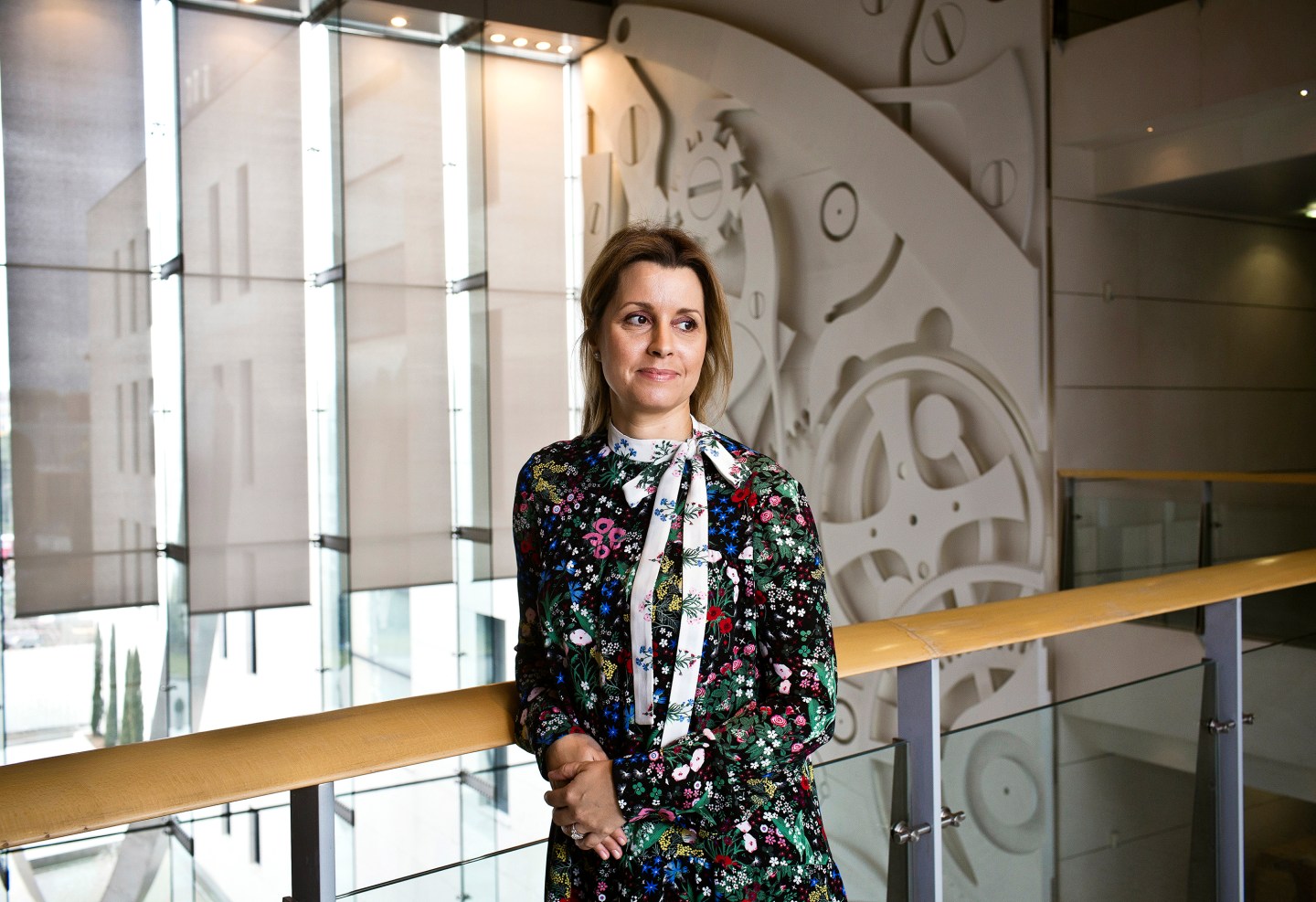 Among the buzzy standouts at this year’s Baselworld, horology’s world’s fair, was Patek Philippe’s 7130G, a stunning 36mm, white-gold wristwatch. The newest version of Patek’s World Time Reference, it boasted a peacock-blue dial with a guilloche center, a sunburst outer chapter ring indicating all 24 time zones, and a bezel set with 62 diamonds. The watch’s mechanical movement, visible through the sapphire crystal case-back, showed off its gold microrotor and a 48-hour power reserve. Coming in at just over $51,000, it was precisely the kind of complicated, mechanical timepiece that the fervid boys’ club of watch enthusiasts likes to obsess over, except for one thing: The 7130G was made for women.

Once the exclusive domain of men gripped by whiz-bang micromechanical engineering and the status that comes with strapping a power toy around one’s wrist (along with a price tag approaching a small mortgage), increasingly women, no longer satisfied with simple, bejeweled, battery-powered watches, desire a mechanical timepiece with a technically complex movement of their own. Like their male counterparts, they’re also willing to spend upwards of six figures for the privilege.

In part, the growing interest in mechanical watches among women reflects the broader shift of women coming into their own, entering the top echelons of business and politics, as well as expanding their buying power. “I have one female client who owns 30 Pateks,” says Denis Boulle, the CEO of De Boulle Diamond & Jewelry, based in Texas. “We opened our second salon in Houston two years ago, and 50% of our inventory is ladies’ watches,” he says. “That was almost unheard of; it shows how much this segment is growing.”

What women want, says Sandrine Stern, the head of watch creation at Patek Philippe, are timepieces with both substance and style. “When I speak with ladies, their first priority is how it looks,” she says. “They prefer complications that are useful, like a date indication.” While men, she notes, “like visible complications like a chronograph, something that looks high-tech. For them, it’s a bit like buying a sports car.”

For the past several years Stern, 44, who began working at Patek in 1995 (she married Thierry Stern, president and fourth generation of the family that has owned the maison since 1932), has helped to spearhead this gendered watchmaking evolution, overseeing the development of women’s complicated watches alongside those for men, heavy on technical innovations but with an appreciation of aesthetics and design.

Caroline Williams, owner of the Curated Cellar, a wine consulting business in Connecticut, began collecting Patek Philippes 11 years ago after attending a watch auction. “Initially, I was interested in the histories and backstories of the pieces,” she says. “Later I became more interested in the art and science.” Today, Williams’s collection, comprising nearly two dozen pieces, both vintage and contemporary, could go dial-to-dial with any man’s collection. “I like the idea of problem solving,” she says, “and watches solve these amazing problems with time. It’s this whole world that combines physics and engineering, art and music, and it just hooked me, completely.”

What’s more, she says, “if I am wearing a watch, and I sit at a table with a bunch of men, they notice it. For me it has become a great connector in the business world. I’m a blond woman, and if I walk into a room, people have ideas about me. But this cuts through the small talk and draws people out. It becomes another point of discussion.”

Until recently, women’s luxury watches were basically smaller versions of men’s models with simple quartz-battery movements and pretty diamond-encrusted dials. The success of Patek’s Twenty-4, a modern interpretation of its iconic Gondolo timepiece for ladies, while quartz-powered, changed all that, demonstrating there was an appetite for watches made expressly for women, not just a man’s watch redesigned for them. “It proved that there was a real interest,” says Stern, who thought expanding into women’s complicated watches seemed a logical next step. “Since we are a family business we can do what we want and not wait for all the figures and analysis.”

The move was not entirely a break from tradition. The 178-year-old firm has a storied history of crafting innovative and beautiful ladies’ timepieces. In 1868 Patek produced the first Swiss wristwatch, a key-winding bracelet for Countess Koscowicz of Hungary. In 1916, Patek blazed a new trail when it introduced a ladies’ Five-Minute Repeater.

Stern’s instincts proved correct. After launching its men’s Annual Calendar in 1996, Stern says Patek began hearing from many clients that their wives and girlfriends were “stealing their watches.” Patek launched its ladies’ Annual Calendar in 2005. Since then, Patek has designed an entire universe of complicated ladies’ timepieces including moon phases, minute repeaters (which indicate the time with chimes at the touch of a button), split-seconds chronographs, and skeleton watches—where the movement is visible through the dial. In a twist, in 2009, it introduced Reference 7101, the Ladies First Chronograph, whose movement was originally built for women and later adapted for men, hence the name.

At the moment, Stern says, Patek’s customer ratio is 30% to 70% women to men with room to grow. Highlighting the importance of this market segment, the house released in July several new limited-edition women’s complications, including a World Time Reference with the Manhattan skyline embossed on the dial to coincide with its 11-day Grand Exhibition in New York.

More than a singular trend, luxury marques such as Breguet, Harry Winston, Vacheron Constantin, and many others now manufacture their own in-house movements, with complications, specifically for women. “Brands see it as a new opportunity, especially in the American market,” says Hyla Bauer, a watch consultant and journalist. “They see there’s an interest and demand placed by women and therefore have found it of value to create timepieces and movements specifically for them.”

Watch brands are also beginning to bring the feminine touch to the executive suite. In March the luxury conglomerate Richemont named Chabi Nouri as global chief executive of Piaget. It was the first time that Richemont, owner of 11 watch and jewelry brands including Cartier and Panerai, put a woman in charge of one of them.

In many respects, the focus on the women’s market is not so much about micromechanical engineering as it is about math. The segment represents a growth opportunity in an otherwise slumping industry (according to the Federation of the Swiss Watch Industry, last year exports fell nearly 10% to $19.4 billion, the sharpest decline since the global financial markets imploded in 2009). “I think the brands understand not only that women are showing more interest but that they’ve long disregarded one part of the market,” says Karine Szegedi, head of luxury for the Swiss Market at Deloitte in Geneva.

The days when luxury timepieces are almost exclusively the province of men are clearly numbered. Offers Sandrine Stern: “Women have more independent spending power than ever before. She’s making purchases for herself, and we see that with watches. It’s not like that every day, but I think it will be.”

A version of this article appears in the Oct. 1, 2017 issue of Fortune with the headline “Time for Something More.”