The U.K. Has Locked Itself Into Nuclear Power for 35 Years, but Wind Is Already Cheaper 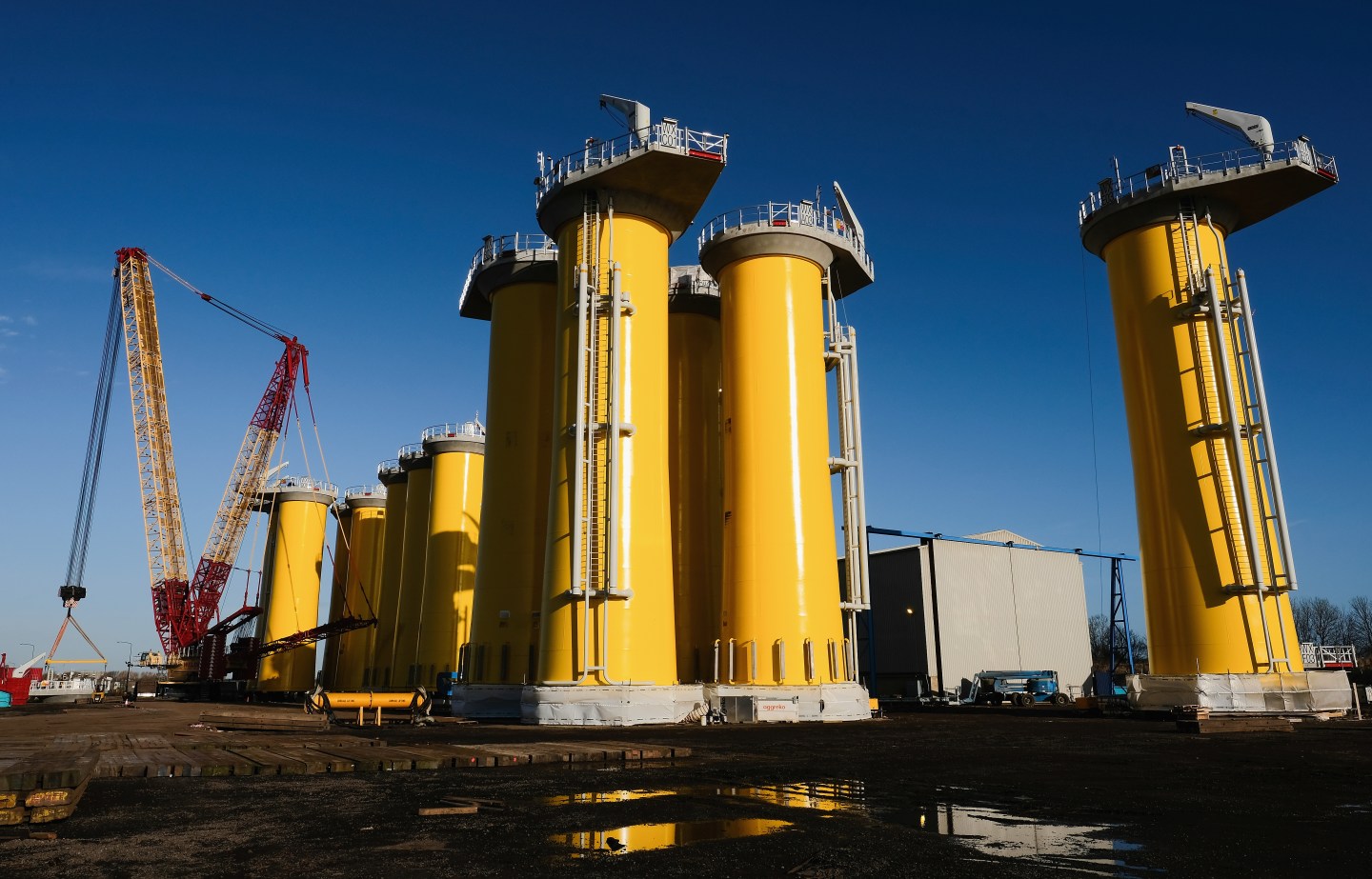 BILLINGHAM, ENGLAND - FEBRUARY 03: Transition pieces for off shore wind farms await loading onto boats at the Offshore Structures Britain wind farm facility on February 3, 2017 in Billingham, United Kingdom. Based on the banks of the River Tees at Haverton Hill, the 42-acre site provides steel manufacturing, blasting and painting facilities for the serial production of large tubular offshore wind foundations, notably the transition pieces which link the mono pile foundations of offshore wind turbines with the towers. They have recently signed the contract to begin manufacturing 56 transition pieces for the Hornsea Project One offshore wind farm off the Yorkshire coast which, when completed, will be the biggest wind farm in the world. Offshore Structures Britain was established in 2014 as a joint venture between German steel fabricator EEW Special Pipe Construction GmbH and the Danish steel construction company Bladt Industries A/S and was formally opened in 2015. (Photo by Ian Forsyth/Getty Images)
Ian Forsyth Getty Images

The startling fall in the price of wind energy continues.

The U.K. announced the results of its first round of competitive tenders in two years for new energy projects Monday, and showed that the amount of government subsidy needed to build new capacity has halved since 2015. The results mean that “both onshore and offshore wind are cheaper than gas and nuclear,” according to the industry association U.K. Renewable. That could have huge implications in a country where – as in the U.S. – the existing fleet of nuclear power stations needs replacing, and the government is unable to build new coal and gas-fired plants because of Climate Change policy constraints.

The winners of Monday’s auctions – Danish-based DONG Energy and EDPR, the renewables arm of Portugal’s largest utility – agreed a guaranteed price of only 57.50 pounds ($75.33) a megawatt-hour for their output, which is slated to come onstream no later than 2023. That’s down from a comparable price of over 114 pounds at the last such auction and represents the price that the operators believe is necessary to recoup their investment over their projects’ lifetime.

But the figure that most are comparing it to is the eye-watering 92.50 pounds per MWh that the last U.K. government promised a French-Chinese consortium to build what would be the first new nuclear power plant in the U.K. for over 30 years. Not only is the ‘strike price’ for the Hinkley Point C nuke over 60% higher, it also runs for longer: 35 years as opposed to 15 for the Hornsea 2 and Moray projects.

The collapse in wind energy prices is due to a number of factors: the business is now more mature, so suppliers have gotten better at making specialized equipment like cables and platforms; banks are more familiar with the concept, and so are more willing to finance such projects; but the biggest single reason is scale. Whereas the first generation of offshore wind turbines stood no taller than Big Ben’s 96 meters, current turbines stand up to 276 meters high and have a rotor diameter of up to 180 meters, generating up to 8 megawatts each. And, in the crowded U.K., only offshore sites can offer the kind of large sites readily available in Texas and elsewhere across the U.S. Midwest. Hornsea 2, some 60 miles off the coast of north-east England, has a nameplate capacity of 1,386 MW, capable of powering over 1.44 million homes.

Of course, the catch is still that actual output will almost always be well short of that 1,386 MW, in contrast to a nuclear power station which, once turned on, will run almost constantly at high load factors for decades. And to compare apples with apples, it should be noted that Hinkley Point, which will satisfy 7% of the U.K.’s power needs if and when it gets built, is the first reactor of a new design class: subsequent similar projects ought to be much cheaper.

“One technology can’t deliver the U.K.’s future energy needs alone,” Tom Greatrex, head of the British Nuclear Industry Association, said a blog post. “With two thirds of the U.K.’s centrally available capacity due to retire by 2030, including all but one of the current nuclear fleet, the U.K. will need the full range of low-carbon technologies to replace ageing infrastructure and provide the reliable, secure supply of power we need.”

Read: The U.K. Will Go Without Coal Power for 1st Day Since the 19th Century

The U.K.’s National Grid, which operates the high-voltage system, estimates that the country may need over 33% more generating capacity by 2050, as electric vehicles replace those with traditional engines. The government recently said it would ban the sale of new combustion engine-powered cars by 2040.

But Hinkley Point’s record to date is far from inspiring: its creators, Electricité de France, originally boasted that it would be online by the end of 2017. However, that date has now been pushed back to 2025. And while EDF and its Chinese partners said they could make an acceptable return on a price of 92.50 pounds/MWh, they have since had to raise their cost estimates up by 1.5 billion pounds to 19.6 billion pounds in July (its chief financial officer Thomas Piquemal had resigned last year, afraid that the project could bankrupt the state-controlled giant). And it is hard to pass Hinkley Point off as a unique case: cost overruns at Westinghouse have already driven its parent Toshiba into insolvency, and the two South Carolina utilities building new reactors according to its designs pulled the plug on the proposed V.C. Summer plant at the end of July.