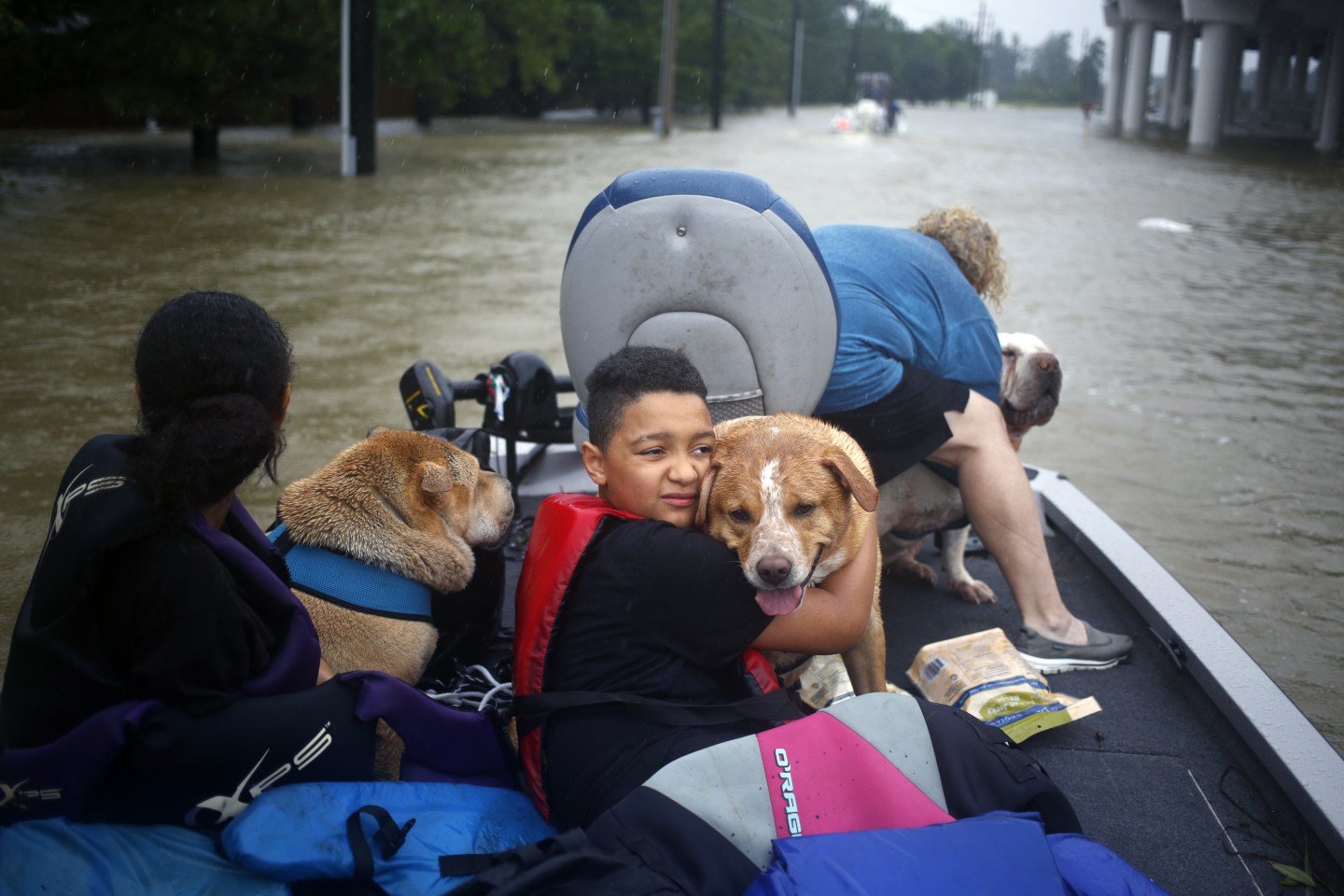 A boy hugs his grandmothers' dog after being rescued from rising floodwaters due to Hurricane Harvey in Spring, Texas, U.S., on Monday, Aug. 28, 2017. A deluge of rain and rising floodwaters left Houston immersed and helpless, crippling a global center of the oil industry and testing the economic resiliency of a state thats home to almost 1 in 12 U.S. workers. Photographer: Luke Sharrett/Bloomberg via Getty Images
Luke Sharrett — Bloomberg via Getty Images

Harvey is set to join Hurricane Katrina as one of the costliest natural disasters in the U.S., thanks to flood damage. Harvey came full force as a Category 4 hurricane on Friday dumping rain on multiple Texas cities and was downgraded to a tropical storm Saturday afternoon.The National Weather Service has called the event “unprecedented.” Officials in Texas on Monday say that at least eight people have died due to flooding.

Schools have been cancelled, business have been destroyed, and people have fled their homes with bags of clothes, important documents, and keepsakes. United Airlines will even shut down at Houston’s George Bush Intercontinental Airport until at least Thursday. Many people had to get creative using blow up mattresses or kids swimming pools to wade through the water. A photo of nursing home residents trapped in the flood waters in Dickinson, Texas went viral as well as the photo of Sheriff’s Deputy Rick Johnson, carrying two kids out of a flooded home in Cypress, Texas.

On Sunday a spokesperson for the Harris County Sheriff’s office said they have rescued more than 2,000 people using motorboats, airboats, and humvees. Many civilians have helped out with search and rescue bringing whatever they can. Houston Texans defensive end J.J. Watt is raising money to help victims of the storm. Actor Kevin Hart has even made a donation and has challenged some of his other celebrity friends to join in. You can also help by donating to organizations like the American Red Cross, which has been providing shelter to people impacted by Harvey.

Click through the gallery to see photos from the impact of Hurricane Harvey.